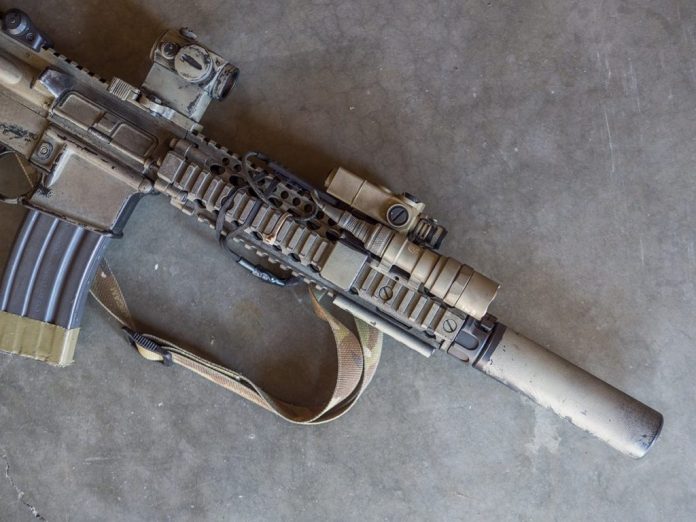 I pulled the trigger on my MK18 with a surefire suppressor mounted and looked back at Jason, an active duty military police officer, “That’s actually still kind of loud” he exclaimed while replacing his Peltor headset onto his ears. And it was. An AR-15 chambered in 5.56 is never particularly quiet due to a variety of factors. However, if you are considering a suppressor for your AR-15 we should be candid about what it entails and what to look for.

There are three main sound sources made by an AR-15 when a round is discharged; the muzzle blast, the sound of the supersonic slug breaking the sound barrier and the mechanical noise of the weapon cycling after each shot. A suppressor aims to quiet the sound of the muzzle blast by trapping the expanding gasses from the end of the muzzle and allowing them to cool and decelerate in a series of chambers. In this way, the decibel level is reduced. However, regardless of this the 5.56×45 is a loud round even when suppressed because the round is breaking the sound barrier which creates a sonic boom.

So how quiet can you expect your AR-15 to be with a suppressor? It’s a hard question to answer and depends on barrel length, ammunition and the suppressor being used. In general, a 16 inch AR-15 firing standard M193 produces a decibel level of around 167 dB give or take depending on environmental conditions. Averaging out a couple of the leading suppressors in the industry you see an average noise level of around 136 db with a suppressor attached. Which is a significant reduction. For comparison’s sake an unsuppressed 22lr rifle typically falls in the 130 dB range.

An AR-15 can be made quieter by firing sub-sonic ammunition however, the AR-15 will not cycle properly. There are several great calibers out there available for the AR-15 platform that allows the use of sub-sonic ammunition along with reliable functioning. Many choose to stick with 5.56×45 for ammo availability, familiarity and commonality among several other weapons that they may own. For the purpose of this article, we will primarily concern ourselves with suppressing the AR-15 in 5.56.

Some try to buy suppressors based soley on the decibel level produced. However, there are several other things to consider when it comes to sound. Tone is the relative pitch and strength of the sound that the suppressor produces. I’ve found that tone can make a suppressor with a higher decibel level sound quieter. The Surefire SOCOM556 RC gives on average a decibel level of 139 dB. This is louder than many competitors on the market however I’ve found the tone to be deep and pleasing. If you have the chance listen to different suppressors at local matches or shoots. If this is not possible, try searching on many of the dedicated suppressor forums that dot the internet. Many people will be able to comment on the tone of a certain suppressor and whether they like it or not. Understand that it is the internet however. 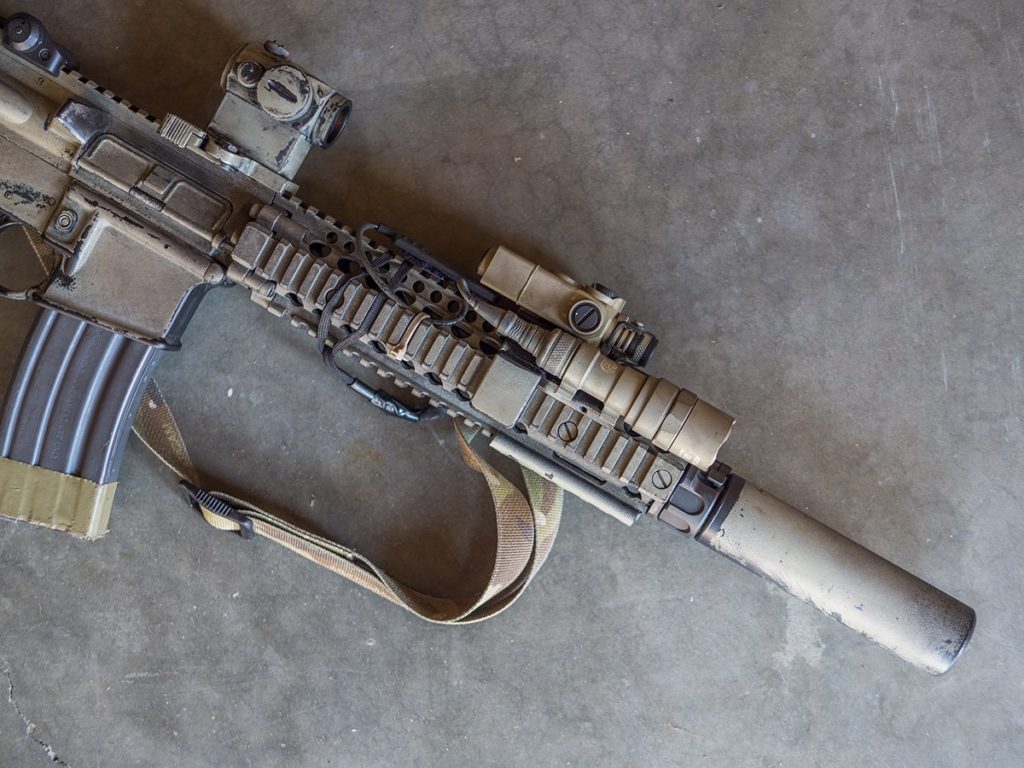 Size matters. Add a 6-inch suppressor to the end of your 16-inch barrel and you now have a 20 inch plus barrel. Although these suppressors typically weigh in at 1 pound, it is a pound at the very end of your rifle and that weight will quickly add up. The shorter your suppressor becomes the less effective it becomes at sound suppression. The lighter it becomes the less it can handle heat. There are trade-offs to made everywhere. You need to determine what type of shooting you’re going to be doing and precisely what you need from your suppressor.

A suppressor traps a lot of gas. It also increases the dwell time at your gas port. All of this leads to an excess amount of gas coming your way and exiting around the charging handle to sting your eyes. There are several fixes available. An adjustable gas block will allow you to adjust the amount of gas being tapped off from the barrel thus eliminating much of the excess gas. Gemtech makes a suppressed bolt carrier group which can vent the excess gas out the side of the carrier. Finally, there is charging handles that are made to deal with excess gas from suppressors or conversely you can use Permatex RTV (a silicon sealant) to close the gap between the charging handle and the upper receiver to disallow the excess gas from reaching your face. Some suppressor manufacturers add an expansion chamber or an internal venting system to help reduce back pressure and when used in combination with the above products can make for a pleasurable shooting experience.

Them suppressors get hot

Each successive shot is going to raise the temperature of the suppressor fairly quickly. There are a variety of factors that come into play but some information puts that number at around 7-10 degrees Fahrenheit each round fired. A 30 round magazine would then increase the temperature by over 240 degrees Fahrenheit. Suppressors can get hot enough during a course of fire that if you transition to your sidearm and let your rifle hang down and it touches your pants, it could burn a hole straight through them. Many companies tell you to limit your strings of fire. If my memory serves me correct several different suppressor manuals state that strings of fire of over 90 rounds should not be attempted. If you use a suppressor, I’d recommend a good pair of heat resistant gloves. If your aim is long-range shooting be aware that as the suppressor gets hot those waves of heat will rise and could distort the view of your target through the optic. This can be mitigated to some extent by the use of a suppressor cover. 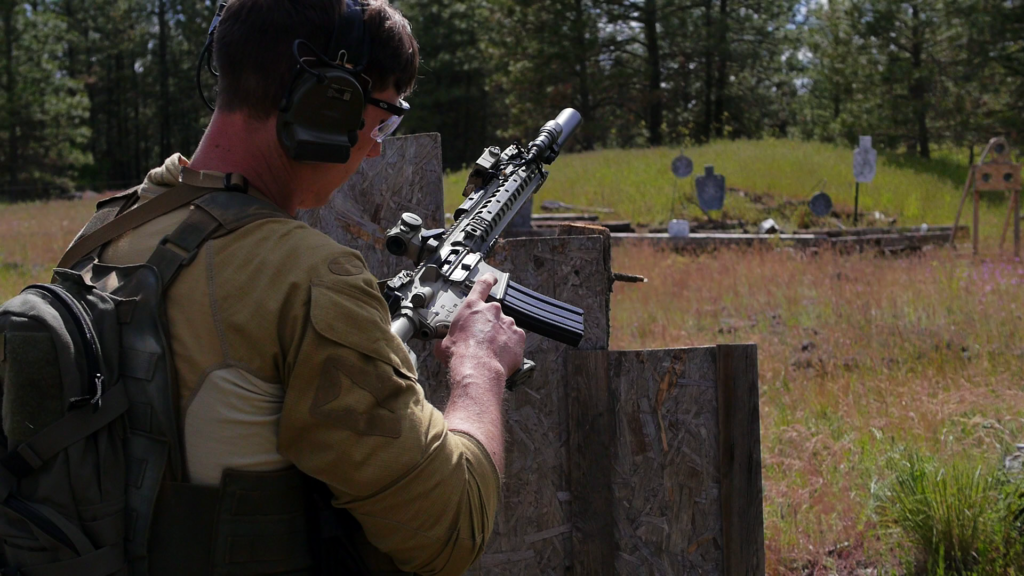 A good mount is vital. Also, automotive anti-seize on the threads helps quite a bit as well.

One of the often overlooked aspects of a suppressor is the mount. Why is a mount important? It could be the difference between a good day of shooting or a terrible day in which a poorly aligned suppressor leads to a 5.56 slug striking a suppressor baffle or the endcap of the silencer. It could also be the difference between your suppressor freezing hard to your muzzle device or coming off easily. There are many mounting options out there. Make sure you do your research and pick one which has a reputation for strength and ease of use. A quick word of advice, no matter how good the mount is I would advise putting a small amount of automotive anti-seize lubricant on the threads or lock up location.

If you don’t manage your excess gas you’re going to have an increase in the velocity of the bolt carrier group. Many individuals control this by added a heavier buffer to their rifle in order to slow it down. A popular option is to utilize the Vltor A5 recoil system which in a nutshell uses a rifle length spring along with a special buffer. On most rifles, the standard weight buffer (A5H0) will work fine, although you can toy with a slightly heavier buffer in order to fine tune your rifle. On over-gassed rifles, such as the Daniel Defense Mk18, I’ve opted for a specialty heavyweight 6.8 oz buffer to calm the vicious speed that occurs when a suppressor is mounted to an already over-gassed system. 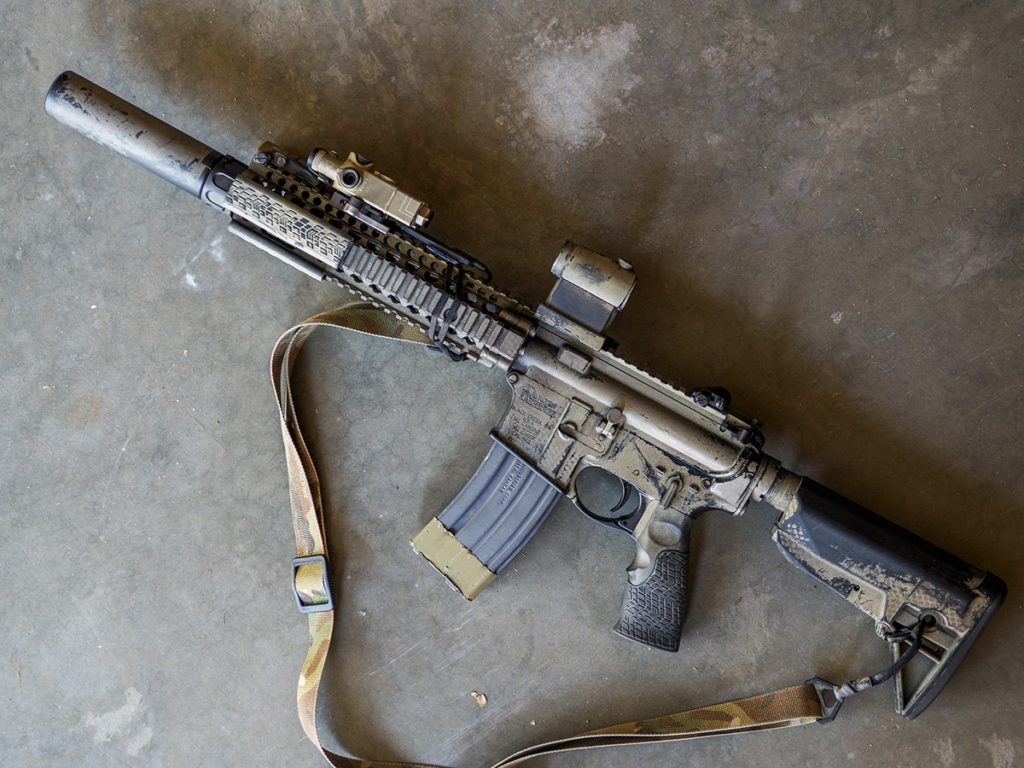 What good is my suppressor then?

Almost complete reduction of flash for night shooting. If you’ve ever had the opportunity to fire a rifle at night you can appreciate the amount of flash that is made. A suppressor (depending on make and model) will eliminate most of that. This makes shooting with night vision goggles an absolute pleasure as they are not getting washed out constantly by the muzzle blast. It obviously has it’s uses in a tactical environment as well. An enemy unable to pinpoint your location due to the reduced flash could, in some cases, be the difference between life and death.

Further, a suppressor helps reduce felt recoil due to the added weight at the muzzle as well as the reduction in speed of the propellant gasses. I’ve also found that the quiet report and lack of muzzle flash aids in rapid strings of fire or target transition. On average my timed drills are somewhat faster than without a suppressor even though my rifle weighs more and feels unwieldy.

Finally and perhaps most importantly, when a suppressor is paired with ear pro you protect your hearing even better. Hearing damage is cumulative gentlemen, and investing in a suppressor when you’re younger could perhaps help mitigate hearing damage later in life. For those who already engage in shouting matches due to loss of hearing, a suppressor could help preserve what you have left.

What motivates many to buy a suppressor is the combination of noise reduction, muzzle flash reduction, recoil reduction and protection of their hearing long-term. There are drawbacks when suppressing the AR-15 however I strongly feel that the pros outweigh the cons. A suppressor is an investment. Buy once, cry once has never been truer.