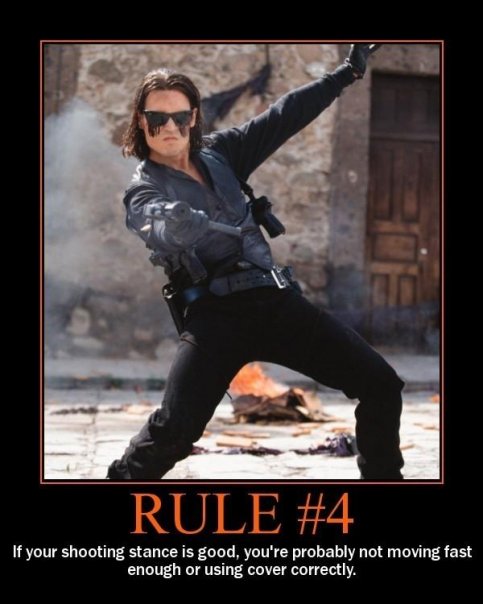 Get off the X.

No one is static in a gunfight.

All of these have been shouted at me in a training environment that was usually very static.

Shooting the marksmanship tables of the United States Marine Corps. or the U.S. Army are very static events. Pistol qualifications are equally without movement. Even when movement is incorporated in some manner it comes in a very simplified and academic manner.

The live fire and maneuver (LFAM) which I was introduced to in a baptism of fire and ice was a whole different ball game (two feet of snow that fell the previous night, incomplete prior training as I was not MOS Q’d, and a half issue of gear and nearly no experience with any of it as basic in MCRD San Diego was still using Viking era hand me downs in 2007). I survived. I actually did well thanks to an observant team leader who (when handed the most boot of boots) checked the gear I did have, rehearsed with me, and corrected.

The vast majority of our available training and practice, due to any number of considerations, does not practice movement. Yet we need to move. How?

Why do most skills drills focus on static shooting? Why do we need to move?

The first question to answer is why is movement so important. The answer most overlooked is to simply be a moving target. If all you practice is static drawstrokes, don’t be surprised if that is all do in a real gunfight. Rather, if the situation dictates you should move aggressively on contact and not only be able to draw, but effectively engage and suppress the threat while on the move. What about those times when you are unarmed, where carrying a firearm is prohibited. Moving creates distance and distances creates opportunities. There are additional reasons to move, seeking cover, moving to a loved one or closing the distance, but think about being a hard target to hit. – Jeff Gonzales, Movement is Life

Moving gives you more opportunities to stay alive and reduces the chances of sprouting extra holes that leak.

Now why are most skill drills static? Three S’s.

From a Safety stand point, moving with a loaded firearm is extremely dangerous. Moving and shooting even more so. It cannot just be performed by the untrained and unskilled on demand without tremendous risk to themselves, others, and property. Just as with driving a motor vehicle, there are a lot of things going on concurrently and mistakes cause holes where they aren’t needed. Moving with a firearm and then moving and shooting with a firearm is a skill that takes time to develop properly and like many fundamentals it is not fun or ‘Instagram Gold’.

With Skill Set considerations there are often other fundamentals that need attention too. So then it becomes a game of time and training management where working on your draw, accuracy, trigger press, or any of the more gratifying fundamentals are easier to weigh more heavily. Restrictive training environments also contribute where movement maybe prohibited by range rules. So we rationalize movement’s lack of inclusion by focusing on other skills.

Finally Safe Space, using influences from the first two S’s shooters will keep themselves in their safe space of positive feedback. If you’re good at drawing and shooting at 3-5 yards you’ll continue to prioritize that. You’ll justify the fundamentals you are good at it over the weaker ones. This is human nature, we enjoy being good at things.

So how do we train to move?

The easiest method for the average shooter, in my opinion, is competition. Going to an IDPA, 2-Gun, or 3-Gun match of some variety where the stages require you to move in odd and unfamiliar ways is a simple and safe way to break the mold of a shooter’s safe space.

At a well organized match each and every stage will have Range Safety Personnel (usually traveling within your competitive group) and they, the other shooters, and your observation of the other shooters can give you more relevant experience with moving than just about any other method available.

So readers, get moving.