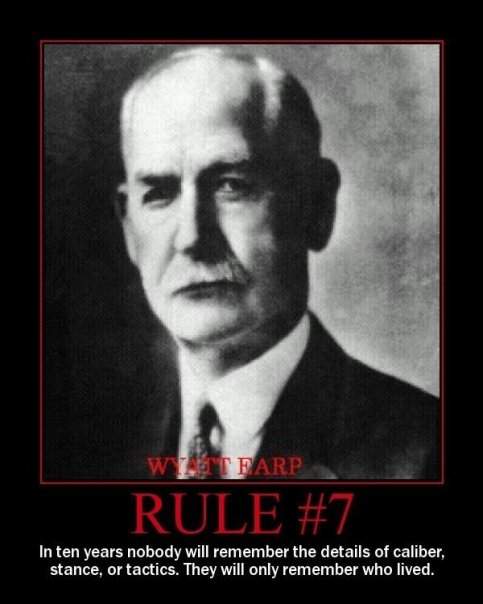 The quicker a fight ends the less shot you will get. Every second that a fight remains active is another second the hostile person or persons are sending hot jacketed lead, unforgiving steel, or heavy blunt force trauma at you and others.

It is simple math, the longer the fight lasts the more injured you will become. It is in your extreme best interest and that of anyone you are protecting to end the fight swiftly and decisively. How do you go about that?

First. When it is time to use force, use effective force. The last post talks about how quickly to get violent if called for.

Once that determination is made do everything in your power to deliver overwhelming debilitating force to the threat. Make them unable to fight NOW.

Simply put, in a gunfight deal multiple (as necessary) center mass and central nervous system impacts. Damage the body until it voluntarily or involuntarily gives up. Involuntary is more secure but either one is a decisive win in your corner, and physically speaking if they aren’t fighting they are by legal definition not a threat right now.

So prepare to live. Prepare to end a fight quickly. Mentally steel yourself to the decisions that will end the fight in your favor and do so at minimum risk to yourself and others. Time is your greatest risk exposure.

If you’re unsure of how to effectively disable someone in a fight you suspect you could be put into, then my friends you’ve identified a course or series of course that you need to take. Wounding science is a very real thing that better prepares you for both causing and treating wounds.

Cause them to the bad guys, treat your own and those around you, treat a bad guys last and ONLY if safe to do so. They matter dead last is any situation in which you needed to flip on that violence switch.