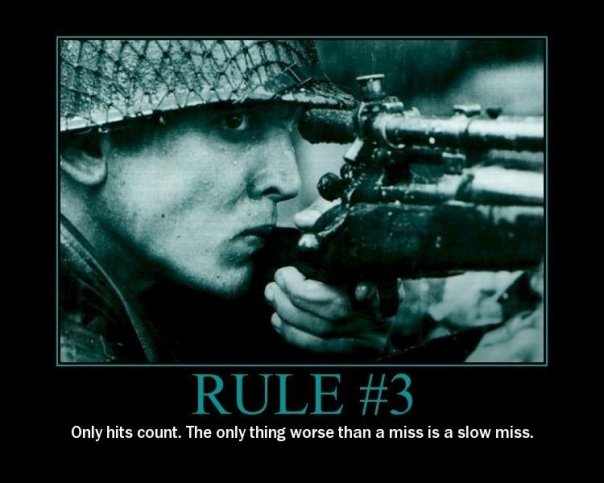 Can you hit your target?

If YES, how quickly?

I see plenty of video evidence all over the range of social media showcasing speed but almost, with a select few exceptions, none showcasing accuracy at anything beyond arm’s length. Many people move to the second point before thoroughly addressing the first because the second looks better on camera or that is what they are seeing over and over online.

From a personal protective standpoint effective fire is what we are dealing with. It would be a wildly rare defensive gun use that sees a civilian or LEO using a sidearm (or rifle) for suppression. With the exception of belt fed weapons or a team using multiple rifles a single defensive shooter does not have the ammunition to maintain suppression. Suppression also damages the area suppressed, a significant concern where collateral damage to bystanders and property must be accounted for.

Effective fire, shots delivered to the center mass of the chest cavity or CNS to disable a threat’s ability to fight.

What do you do to assure you can deliver those shots at necessary distances? I’ve seen shooters miss an 18″x30″ target at 5ft. The shooter was so focused on getting a shot off they didn’t bother to make sure it hit what it needed to.

The drill at the link is my humbling favorite. Dot Torture requires one box of ammunition. It works two handed, one handed, and off handed shooting. It works multiple targets. It works drawing from a holster. It works reloads. It does this all in 50 rounds using 10 small targets.

You get no points for speed in Dot Torture. Only hits count.

You may very well get no effect on a threat if you do not connect rounds.

Someone trying to kill you will not care how blindingly fast you missed them.