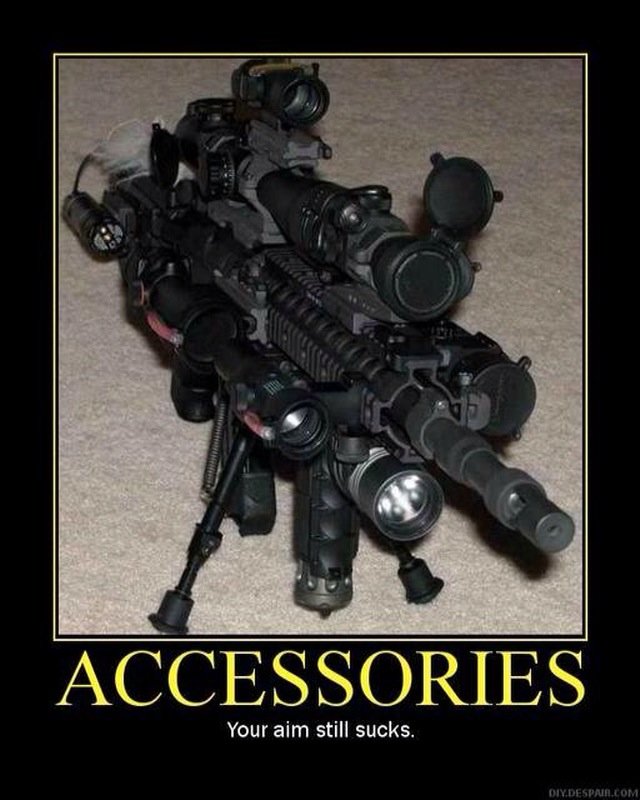 “Most combat shooting standards will be more dependent on ‘pucker factor’ than the inherent accuracy of the gun.”

A note on accuracy.

It is a widely abused term.

If a rifle isn’t ‘Sub-MOA’ (even if the person asking has no notion what that means) or a handgun doesn’t stack rounds at ten yards in their hands then the gun in question “Isn’t all that accurate.”

Quick Reminder: The gun is almost universally more accurate than the shooter. The shooter is the greatest detriment to the firearm’s accuracy.

Variations on the theme of ‘combat’ accuracy abound. One of the most common terms thrown around is ‘Minute of Man’. Minute of Man describes a rifle or firearm that is considered accurate enough for a fight but not at the level of a precision rifle.

AK’s often get this label despite numerous examples of AK’s able to pace AR’s shot for shot.

So what is objective combat accuracy?

First a quick aside to define Minute of Angle (MOA) for those unfamiliar with the term. A Minute of Angle is 1/60th of a Degree of Angle which is 1/360th the space on the circumference of a circle. As the circle gets larger (distance increases) the physical space an MOA covers increases. The rough reliable translation is an MOA covers a 1″ space per 100 yards of distance

Let’s take a look at the U.S. Military for that combat accuracy standard.

The M16A4 and M4A1 service rifles firing with the (now retiring) M855/SS109 round had a minimal acceptable combined accuracy of 4 MOA. 2 MOA was allotted to the rifle and 2 MOA for the ammunition. If the rifles can group 4″ at 100 yards they are considered serviceable (I’ve never seen a rifle perform that poorly, most hover around 2 MOA).

This, at the rifles rough effective range of 500 yards/meters, will result in a 20″ group vs an 18″ human average torso width equating mathematically to a 90% hit percentage.

This is the minimally ‘combat’ accurate standard for a functioning rifle.

Are you generating these results when you shoot? If not it’s more than likely your shooting and not the firearm.

If you have a decent off the shelf handgun, tactical carbine, or shotgun it is combat accurate. But are you?

Stress induced accuracy reduction will open your accuracy up depending entirely upon how personally disciplined you are. Someone who is amped up on an adrenaline dump but disciplined enough to maintain mental and physical control could still see their accuracy halve. If you lose discipline in the fight their is no accuracy standard, you’re throwing rounds.

Do you train to reduce stress induced accuracy degradation?

Here’s a place to get started. Next, get to a class.