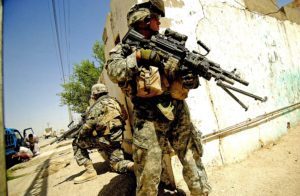 se·lect
/səˈlekt/
verb
1. carefully choose as being the best or most suitable: “he has been selected to take part”

Every one of us inherently wants to be selected. “Oh…PICK ME, PICK ME!” We bustled on the school playground forming up for games. Doesn’t it seem like you can hardly just go participate in a thing anymore without being selected first? “The specially selected elite,” “select cuts of meat,” “they were selected on the basis of their superior ability.” Most of us want to be selected for something, but until what? Until there is nothing higher to be selected for?

Selection for me during my adult years began with the (no kidding) Army infantry. Mind you, selection was a requirement to get into the military in my day of the between-wars, go-nowhere, do-nothing Army, in a day where a pulse and arched feet meant a checkmark in the selection box. I was nonetheless selected by the Army and did my victory dance out in the parking lot of my recruiter station.

There wasn’t much selecting going on in the Army for the next two years of my enlistment. Most of the selecting entailed guard duty, garbage management, bodily excretions disposal on bivouac, and other heavenly, exalted tasks. And yet, “They chose…ME! I was the chosen one, the one selected!”

I heard the paratroopers were selecting men; theirs was a selection I originally forewent due to my monumental fear of heights. But after two years of serving in the regular “leg” infantry, I was ready to jump even without a parachute just to extract myself from my hateful environment.

I tried out for and was selected to become Airborne easily enough, save a broken pinky finger knuckle I got when I punched myself in the face upon landing from a 250 jump training tower at Ft. Benning, Georgia.

“KEEP THOSE ELBOWS TUCKED IN TIGHT, LEG…YOU ALMOST PUNCHED YO’SELF IN THE FACE, LEEEG!” Blared the ground cadre over a loudspeaker.

“Yeah, well the joke’s on you, asshat…because I DID punch myself in the face. HA!” I sure told them. Boxer’s fracture notwithstanding, the Airborne selected me and I ushered in a personalized styling of my victory dance there in the red clay of Georgia.

To my dismay, the GBs were not nearly what I had expected them to be. I think the fact that I was on a combat dive team was a saving grace that enabled me to remain in the GBs for so long as I did. It was, in spite of everything, a team of the very best men the regiment had to offer. The fact remained, though: I was afraid to find myself in combat with the GBs of the day.

I was ready, then, to be selected by the next great band of brothers. But alas, I had a great handicap blocking that path. I doubted, quite frankly, that I could perform on a level that would even remotely catch the attention of the Delta Force.

Bros of mine (in civilian clothes) protect Commanding General Norman Schwarzkopf during the First Gulf War.

I was not being overly humble. I tell you, truly, my resolve was largely devoid of all emotion; it was simply a mathematical equation that I calculated in earnest, and its dividend demonstrated that I was not capable of performing to their standard. If I attended their selection, it would be a mere percent of probability that if Delta looked for me in a specific place and time in the West Virginia wooded mountains, they would actually find me.

“The greatest failure is the failure to try,” said a genius once, so I tried.

Getting into long-distance marching shape where I lived at the time in Key West, Florida was a problem. The only long distances out there were along major roads and highways. The only elevations to “climb” there were about three feet above sea level, and the occasional hump bridges over water flows. I took to climbing fire escapes on the tallest buildings I could find.

Cartoon made by the author, depicting himself before and after a long march along the highway in preparation for the Delta Force Selection and Assessment course, and his friends’ waxing and waning confidence in his ability to pass.

I garnered unwanted attention as well, me rucking along the highways as I did daily. In a Safeway grocery store of all places, a tormented person just had to approach and ask, “It’s you. You’re him. You’re the guy I see every day racing up and down the highway with a backpack on. Why do you do it?”

“Oh, no big deal, really. I just got my license suspended for a DUI.”

My own A Squadron in the Iraqi desert, hunting for SCUD missiles. No officers were present during this operation—only non-commissioned soldiers.

Creative? Maybe, but it served me well. I made my way to the Delta Force Selection and Assessment course in West “By God” Virginia. I recall the last remark my mentor James N. Sudderth (KIA) said to me as he convinced me to try out for selection. I’d lamented that my body couldn’t physically handle it. “It’s OK if your body can’t make it, George, because it’s an out-of-body experience. Just go!”

So I just went. James was, of course, correct in much the same way that he was correct about most things regarding life—both in and out of the Army. Now he’s gone and I miss his mentorship. As I have often said and will say again, “If you no longer have a mentor, then you’d best get busy being one to somebody.”

I remember the day well, as it was the last day of selection. The last of 30 days of nonstop humping miles and miles of mountainous, forested terrain. On this last day, we had already dragged off the last few centimeters of our dicks in the dirt. For that we were awarded this fine opportunity to hump five or six times the distance we had ever humped before on any previous day. Sounded legit. This was no time to dance; it was time to pay the band.

I remember the day but not the exact hour when my body collapsed in complete failure on a muddy trail. A river ran through it, right down the middle of it—the entire unending length. I closed my eyes there where I lay in it. How hard I had tried to avoid it for so long, to keep my feet dry for some 10 miles or so. Now I lay in it squarely and hoped it would wash my body down that murderous mountain into some tranquil meadow.

Then I saw him. He was just below me at a full gallop. I had somehow taken to a lofty point just above and behind him, watching him run, and my, how he did run. He ran right down the middle of the river on the trail. He was strong and sure-footed, fast as a strong wind by my estimate. I wanted to cheer him on loudly, for he had kept on in the fight where I had just failed.

His strength and speed were a thing I marveled at. I didn’t hang on bitterness for my own personal failure; I had done my best and hit my wall, but I still had pride and sympathy for those who still had blood in their hearts. He was my hero for that; he could never die. “GO, MAN, GO! KEEP IT UP, POUR IT ON!” I was just so, so damned proud of him, whoever he was.

Later, I lay on my back with my head on my rucksack as a pillow, my boots and socks at my side, my bare feet near a blazing fire. Next to me, left and right and all around the fire, like spokes of a wagon wheel, were my brothers who had also made it through the course. There were more men around that fire than had ever passed the selection course in the history of Delta.

We had sandwiches of bologna and cheese in one hand, and a cup of hot “Long Walker” in another, gifting us a mild whiskey buzz. We looked at each other with wry grins but said nothing, the looks saying it all. It had, after all, been an out-of-body experience for each brother. It took us all a hot minute to crawl back into our destroyed bodies.

I thought of my victory dance and judged it a good thing to defer to a later time. Looking back, I realize that, in all the frantic fast-train of life in Delta, I never actually took the time to do that dance. But all in all, if I had actually done that dance back then, it wouldn’t have been an act of audacity, but of foolish arrogance.