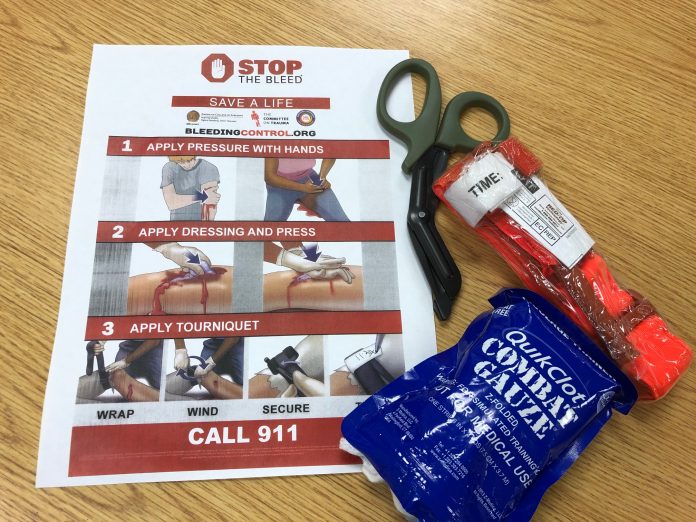 I had the opportunity to “Do Something” about mass shootings last weekend. I took a Stop the Bleed class

With the tragic unfolding of events in Atlanta and Boulder we are (yet again) hearing calls to “Do Something”. Unfortunately the “something” being done is the usual call for anti-firearms legislation. Not only is there reams of evidence that additional gun laws won’t work, but it places the focus in the wrong direction.

I want to place your focus for a minute in a positive direction and one that is actually helpful. More average citizens need to learn first aid and more particularly for these situations, they need to learn bleeding control.

Stop the Bleed is a national program of the American Academy of Surgeons, designed to teach non-medical average citizens some of the skills of a first responder. This is because bystanders are usually the first true “responders” to a traumatic injury or mass casualty event – who are on scene in seconds rather than minutes.

Having the tools and skills to potentially save a life is important in any situation, but especially in “non-permissive” environments like “Gun-free zones” where no one can have a firearm …. except the attacker. Oh, attackers are not supposed to have guns either, but they walk right past those signs anyway. Imagine how that works.

All snark aside, even if you “can’t” carry a gun or aren’t comfortable doing so, you can at least carry a tourniquet and hemostatic gauze. A victim with an arterial bleed can lose enough blood volume in three minutes to die before the ambulance or police even arrive. They aren’t there. But YOU are. You can “do something” to help right then and there.

The Stop the Bleed program uses a class format to teach very basic but essential proven ways to slow or stop traumatic bleeding on scene to help increase the chances of a victim’s survival before EMS arrives.

Class participants are taught through demonstration and hands on practice how to correctly apply a tourniquet to extremities and how to pack and apply pressure to wounds at locations where a tourniquet would be ineffective.

Stop the Bleed training is not only useful for mass trauma situations such as active shootings, but should be essential training for those working with tools such as chainsaws and other dangerous equipment. My forestry major daughter attended the class with me because of the equipment she could be using in the field – often in remote locations.

I attended because not only did I have very little trauma training in medical school and residency, but I had already been “first responder” to someone else’s negligent discharge on the range several years ago.

Fortunately that event did not involve a large arterial bleed and the distal extremity wound was dealt with with the materials at hand – bare hands and a sock – until the med kit arrived. EMS arrived at least 20 minutes after that – a timeframe which in itself was instructive.

This particular Stop the Bleed class was offered by a friend’s A Girl and A Gun Club chapter, at a club which hosts USPSA matches in my area. It was an hour’s drive away but very worth the effort.

Stop the Bleed class only requires 90 minutes of your day and the class itself is free (though the location where it is held may ask for a nominal fee – $5 in my case.) I’ve already ordered and received bleeding kits for myself and my daughter and I need to inspect and replace materials from my existing range kit and “get home” bag.

Check the website for classes near you or ask your range if they plan on holding any classes in the near future. Less than 2 hours of your time is a small investment to make for the ability to potentially save a life.