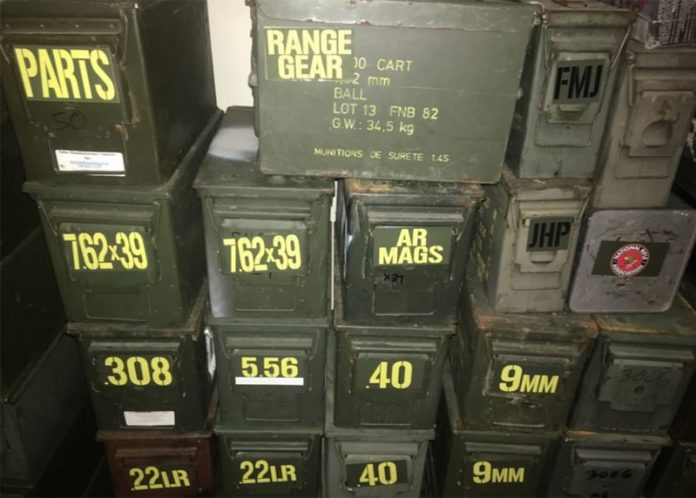 Stockpiling ammo for a rainy day is a good idea for anyone that owns firearms. It is often criticized as being a prepper hobby or something you do when you are scared of an impending ban on a certain type of ammunition. We saw this take hold a few years ago with the big gun scare that still is resonating in the gun world today. You hear that .22LR is hard to come by and when you find it, it is relatively expensive. I hear people local to me bragging about how they have 55 gallon drums filled to the top with .22LR and how they are going to continue stockpiling it. Most of the time, these individuals also talk about how they do not own a rifle or pistol in such a caliber, but want to have it so they can trade it or sell it for a ridiculous price when the time is right. As unsavory as this may seem, this has almost become a trend where I live. Fortunately I don’t own, or intend to own any firearms in .22LR.

When it comes to stockpiling ammo, we need to be very calculated about how we go about doing it. Many people should consider budgeting to start stockpiling ammo. There are several reasons why this is a good idea to start, besides the previously mentioned reasons. For myself, I like to have a generous stock of ammunition on hand just because, since it is always good to know you don’t have to go out and get more ammo, particularly when it is hard to get a hold of the ammunition you need. There are several ways that you can build up your stockpile, and I will run you through a quick method that I have found to work quite well, within a reasonable budget.

Prioritizing the calibers you want to have on hand is the first and most important step. You must figure out what guns you use most, what guns you would like to have more ammo for, and what guns you will find yourself using most of the time. I also recommend making a separate category for defense ammo in your stockpiling considerations as well. Let us say that you have a simple layout of firearms and calibers which consist of a 9mm pistol, a 5.56 rifle, a 12 gauge shotgun. This makes prioritizing very easy and gives you a nice short list of things to prioritize on. From here, you need to figure out how much you shoot with each of these calibers.

Just to simplify this, let us say you shoot 500 rounds of 9mm a month, 150 rounds of 5.56 a month, and about 50 rounds of shotgun a month. At this rate, you are peaking about $200 in ammo each month. There are ways to be able to stockpile on this stockpile if you want to keep this spending rate. But let us say that you can afford $100 more in your ammo budget. If I had this rate of shooting, and I wanted to start stockpiling, I would keep my practice round count where it is while stockpiling in an equal ratio, parallel to my shooting rate. This basically means that i will get for my stockpile, 250 rounds of 9mm, 80 rounds of 5.56, and 25 rounds of shotgun ammo. Depending on the type of ammo you get, the totals may come out to more or less than what your original budget is. You can always roll back the amount you practice in order to save the ammo you did not use and put it with your stockpile.

If you wanted to keep the budget you already have, there are still some things you can do. For instance, you can shoot less and use dry firing as a supplement. You may also think about using less expensive ammunition and really shopping around for good prices like on steel cased ammo and such. Other than that, the only thing you can do is just not shoot a certain caliber for a month and alternate what you do shoot so that you can still build up your stock while remaining on your strict budget.

For defense ammo, I would say that you should try to get 20 or 50 rounds of pistol defense ammo a month, depending on if that type of ammo comes in Law Enforcement quantities, and 20-40 rounds of rifle ammo a month. You could even try getting enough defensive ammo for two 30 round magazines for your 5.56 a month, if you so choose. For the shotgun, I would say that one box a month is a fair amount as well.

When people talk about prepping, it is not often that i hear them talk about getting anything other than factory ammo for their stockpile. I have gotten into reloading 9mm almost exclusively, which has enabled me to be able to shoot 9mm at about half, if not more than what I would pay with the cheapest steel cased ammo. For rifle ammo, this would save you a ton of money as well, if you really are serious about it.

Reloading can be a fairly decent way to budget if you shoot alot, even though the initial investment is alot to take in. Once you get set up, my recommendation is to find a load that merely mimics the recoil of factory ammo, and just stick with that combination. I also recommend that you get powders that are easy to find and will last for more than 1000 rounds per pound, if you can. Also, I recommend buying in bulk since it will easily save you money, rather than buying one pound of powder at a time. This also goes for bullets and primers. I usually order about $300 worth of bullets for about 6 cents per round. Buying in bulk can save you loads and limit the amount of money you need to spend next time.

In general, I would stay away from the idea of loading my own defense ammo, since the point of the ammo is to function terminally. It will take alot of time and energy to ensure that your rounds will function reliably not only out of the gun, but also when they hit your target. In most cases, I don’t think it is best to go all in with reloading and gamble with the terminal ballistics of defense ammo. But in the end, we still live in a free country and you can decide that for yourself.

In my opinion, I think it is very good to have components on hand so i can load my own ammo when I want to. Granted you have to clean and prep your brass, but it works out to be an easy task after your first case. The best part about it is the fact that you can collect brass every time you go to the range, as long as your range allows it.

When you are building up a stockpile of ammunition, the big question is where to put all this boom fuel and how to store it. I can’t really say that I have the best way of stockpiling my ammo. Most of my ammo is in the form of separate 9mm components. I have boxes of 9mm bullets stacked up near my reloading bench, and all my primers and powders are stored in my reloading bench. As for my factory ammo, I still have boxes of ammo stacked next to my safe that wouldn’t fit inside the safe itself. I would say that it is good to store your ammo in ammo cans, but loose. Take the ammo out of the boxes and pour them into the cans and fill them up. I have found that you can store thousands of 9mm rounds in one .50 cal ammo can and about 1000 rounds of 5.56 in a whole ammo can if they are loose. If you try to keep all the ammo in their respective boxes, you will end up having to play a silly game of Tetras in order to get it all to fit. For defense ammo, I would recommend leaving it in the box and just storing it in the safe. Some people think it would just be good to load magazines with the ammo they are stockpiling. I would advise against this because springs in magazines can wear over time and if this is a long term stockpiling, you don’t want to put that kind of long term stress on your feeding source.

Overall, I am a big advocate for a slow and logical stockpiling of ammunition. This can definitely be beneficial to anyone and prepare you for anything from another gun and ammo ban scare to just not wanting to have to go out for more ammo. In general, as long as you think about how you are going to do this, and you take care into making a long term and sustainable routine of stockpiling, your collection of ammo should grow quickly.