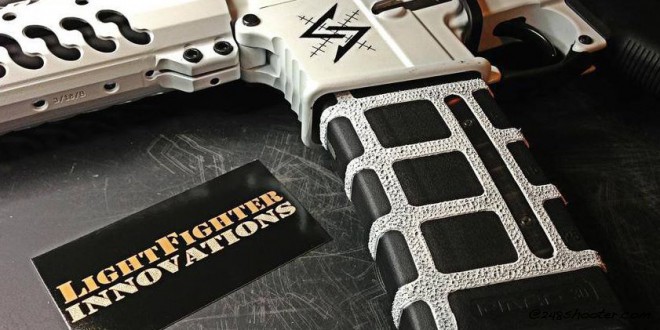 We all know a mall ninja. The most Tacticool guy at the range. He wears 5.11 cargo shorts a point of the spear patch on his hook and loop hat and his AR-15 has every invention, mod and upgrade known to man.

Before you flame this guy it was a joke video.

There is no doubt the mall ninja you know has a stippled Pmag and probably a stippled Glock or M&P to go with his rig.  Though you might look at magazine or grip stippling as Gucci or Tacticool the fact is just beacuse imitators will embrace tech that looks cool, does not mean the technology itself is not good. BAD Levers, Pmag’s, Eotech’s and tons of other great and useful technology has fallen into the mainstream use and misuse but the products themselves, just  like guns are not inherently evil.

Aside from the fact that we can all agree stippling looks damn cool it is there for a purpose. A purposes that is best summed up by a client of LightFighter Innovations.

There is a school of thought that thinks stippling is “Gucci” and serves no real purpose. These people have probably never fought to reload a rifle with a 180 bpm heart rate using only gross motor skills while pressing themselves so low to the ground their buttons felt too thick. Anything that can give you an edge cannot, by definition, be stupid or “Gucci.” People thought red dots were “Gucci” once too. The guys over at LightFighter have taken a good magazine and are making it better. Check them out.” — Sage Dynamics

After checking out LightFighter Innovations and seeing this rather bold comment we decided to put them and stippling to the test. I am not going to compare LightFighter to any other services. I can tell you of the people we have looked at and worked with to date Lightfighter has some of the best designs, styles, turn around time and value for the dollar. We recommend them highly and suggest you consider them for your next job. This article will focus more on the advantages of stippling and help you decide if it is right for you.

We took our stippled Pmag’s to the Patriot Defense Training,  Carbine Level 1 class. After a day of sweating in the sun running around, shooting in the dirt and sweating like a pig at a bacon convention. It took very little time before I realized that stippling was not just Gucci. There was a noticeable difference in retention and manipulation of the Pmag’s that had been stippled vs those that were still factory. My gloves got a better and easier to feel grip on the stippled mags over the traditional mags. As the day went on and my gloves came off my sweaty hands grabbed the stippled mags much easier from my Ten-Speed Blue Force Gear mag pouches then my traditional P-mags. Luckily Brad did not beat us up so much so we did not test how much difference there was when our hands are bloody.

Did I instantly become Chris Costa or Travis Haley with the advantage of my stippled gear? No I didn’t, and neither will you. The advantage you get is confidence in knowing you have the magazine firmly in your hand and possibly a few hundredths of a second during a reload. Is that enough of an advantage to pay a company like LightFighter Innovations to upgrade your mag or pistol? I don’t know, you are going to have to answer that for yourself. However keep this in mind. Brad my instructor over at PDT talks about seconds, and fractions of a second in a gun fight. Every fraction a second you give away is a a loss for you and a gain for your attacker. Though I hope to never test out my speed or skill in a gun fight the fact remains that I will do anything and everything I can to maintain any edge possible. For me that includes stippling both my AR-15 Pmags and my pistol grips.

Lets talk about why might not want to have stippling done.

If you fall into one of these categories then you may want to consider it.

In short stippling is no more Gucci then any other battlefield tool that has been adopted by the American public. It provides a real world advantage when your hands are sweaty or bloody. An advantage that may make the difference between you going home or not.

That said Im not going to lie. They look damn cool as well :) Check out our Gallery of work from LightFighter Innovations and be sure to check them out on Facebook when you get a minute.