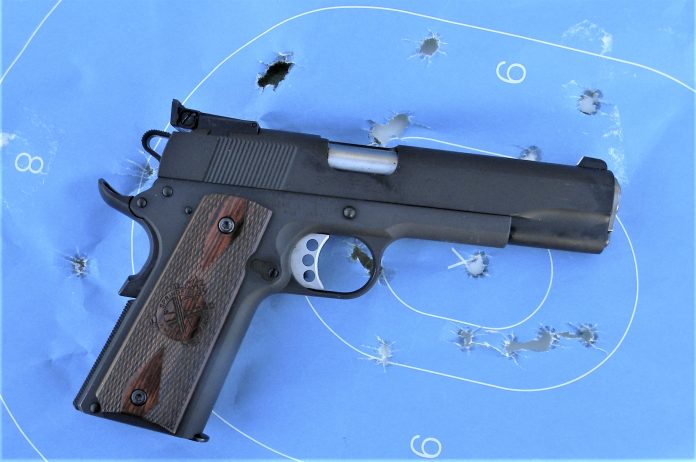 When the Range Officer was introduced a few years ago I grabbed the first one I could find. I quickly learned the pistol wasn’t a variant of the Loaded Model or a GI Gun with good sights, it was more than that.

The Range Officer is a superior shooter and among the best combinations of accuracy and performance in a Springfield 1911 at a fair price. I have built up very nice pistols from the GI gun and the Mil Spec. But the Range Officer is really a nice target gun with a matte finish. Nothing sloppy in the barrel fit or trigger action. In many ways the Range Officer is a match ready pistol. You may not win the match but it is a great starter gun.

You would not win the match simply by paying for a custom pistol either. A steel frame 1911 will withstand a great deal of shooting. The Range Officer should last at least as long as a GI gun. The pistol is more tightly fitted than the GI pistols and this means that there is less eccentric wear. Just honest even wear for more years and ammunition than most of us will ever dream of.

The Range Officer features tight slide to frame fit. There is little lateral play. The barrel is well fitted. As you rack the slide your will feel the smooth but tight movement of the locking lugs into the slide. The pistol features a fiber optic front sight in some models, a simple post in others, and a rugged fully adjustable rear sight. The mainspring housing is properly checkered. The grips are attractive rosewood or cocobolo. The matte finish saves a lot of money on polishing time and expensive bluing but it has proven durable enough for hard use. The barrel is stainless steel and the barrel bushing is also stainless.

The barrel bushing doesn’t require a tool for disassembly. Just the same the fit is snug. The pistol is reminiscent of the first National Match pistols. It is target accurate but not fragile and useful for many types of shooting. The hammer and trigger feature the lightening cut out common to many Springfield pistol. Trigger compression is good. My example breaks at 6.5 pounds. There is a bit of take up, no creep, and a rapid reset. The safety indents in a positive manner. The grip safety proper releases its hold on the trigger about midway into its travel.

The pistol is supplied in a large gray lockable plastic box along with a plastic holster, dual magazine pouch, and a total of two magazines. The holster is OK for range work but nothing I would use for personal defense/carry. I have seen too many cheap holsters break at the paddle. Just the same- we need a range holster when beginning and this is it.

Firing the pistol is a pleasure. This handgun has been in use for several years. It has never failed to feed, chamber, fire or eject. Most of the loads through the Range Officer have been handloads until the primer shortage cut the wind out of my sails on that count. The majority of factors loads have been 230 grain FMJ types. This hardball load hits hard and offers decent accuracy. The Range Officer is more accurate than most pistols and offers real value for the money. The Range Officer doesn’t offer custom level performance but it offers accuracy similar to old standards such as the Colt Gold Cup. The next step up in performance and price is a big one. The pistol doesn’t feature forward cocking serrations or a  checkered front strap, which I would not expect at this price point. The pistol’s accuracy is what matters. Reliability has been good. I would not hesitate to carry this pistol as it has never failed when serving in ammunition testing for several years.

Note: Springfield has discontinued the Range Officer as new models are introduced. There are still quite a few in the used market, even some new in the box pistols. These pistols are well worth their price. Check out the Garrison.

Distance 25 yards, Firing five shot groups, measuring the group from the inside of the most widely spaced bullet holes.