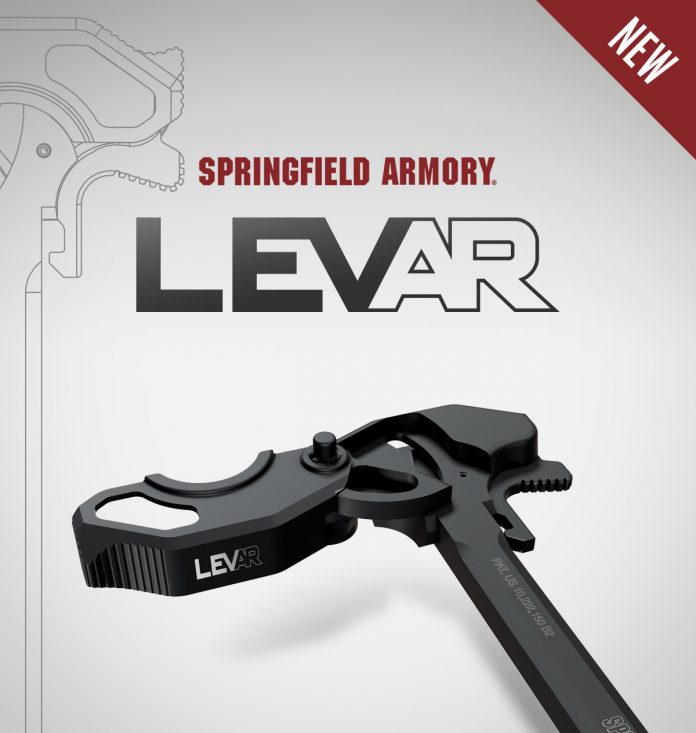 Have you ever broken your AR trying to mortar it to clear a stuck case?

Me either. It has occured, but it isn’t a particularly prevalent problem. Weak substandard components certainly up the odds of this problem occurring, however it still isn’t so common that I foresee the niche for this product…

But Springfield Armory has released this product that should help you with the rare stuck case. Not a ripped rim mind you, that will still require a cleaning rod.

A stuck cartridge in your AR-15 due to out of spec ammunition renders your weapon useless until cleared. Carbine instructors train students to slam the butt of the gun against the ground to free stuck casings causing potential damage to your firearm. The patented LevAR™ ratcheting charging handle gives users a 3:1 mechanical advantage over traditional charging handles and clears stuck cartridges with ease while keeping your muzzle pointed safely down range. Simply deploy the ratcheting arm and pull back to eject the casing. The LevAR™ installs in seconds and is compatible with any standard AR-15 upper receiver.

Now this isn’t a novel idea. It isn’t even a bad idea. The IWI X95 latest generation charging handle offers a similar feature for the same reason, this simply applies an increased leverage technique to the charging handle via the receiver of the AR-15. The AR-15 which can’t get much leverage on it in other manners. AK’s have the mortar, or even kickstart. AR’s have the mortar.

Now AR’s have the LevAR as an option. So that’s nice.

In my opinion, this seems like a solution in search of a problem. I haven’t had to mortar an oiled gun in a long time. A long time. I have had to mortar one M4A1 that was far too dry and so new they hadn’t cleaned the factory preservatives out of it yet. I don’t believe equipping every AR in sight with these for the rare stuck case is beneficial, not in the same way upgrading the X95’s charging handle was accomplished quite unobtrusively.

That said, the design for its intended purpose appears to be solid, using leverage points that you cannot with a standard charging handle to exploit mechanical advantage. I don’t however know the durability on such a design, if it’s additional complexity makes it weak to debris, or if the leverage will have a detrimental effect on other components like the receiver body by the charging handle opening or the gas key of the carrier.

While mortaring does put stress on the carrier key, it is within normal ranges of regular charging and the momentum transfer of mortaring is to the whole of the bolt carrier. This design changes a great deal of the locations where force is applied to clear the case, which is not the case on the X95’s CH design.

So, this is a thing now. The LevAR.