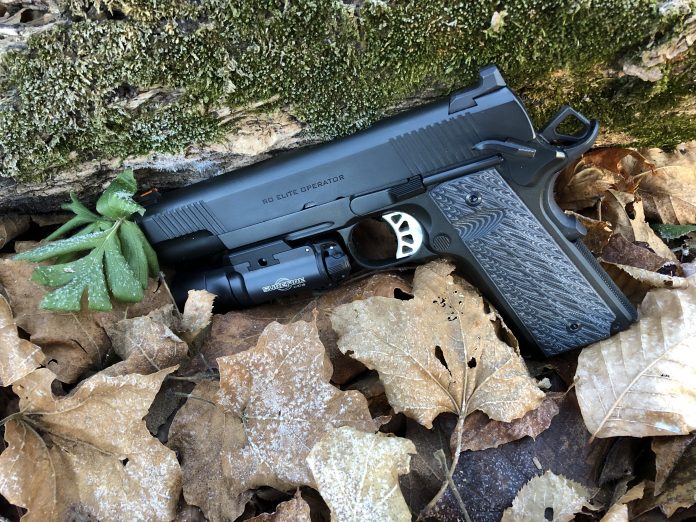 The folks of Springfield Armory are well established in the field of 1911’s. They have been making the John Moses Browning classic for decades.

From their Mil-Spec base model to their TRP, Springfield Armory has a wide array of offerings in their 1911 portfolio. But the Geneseo, Illinois based gun company set a new standard when they introduced the Range Officer series.

1911’s at the time had drifted into two distinct camps, GI Models and “Race Guns”. The middle ground was sparse. Springfield Armory planted their flag into the wide open middle ground by bringing the race gun, and later tactical features, to a more blue collar price point.

Today Springfield launches their 10mm addition to the Elite Operator line. The EO line has 9mm and .45 ACP offerings already, both at about $1150 MSRP. With this third offering, in 10mm, the line offers a caliber for everyone’s tastes.

The Range Officer Elite Operator is a well thought out pistol by every standard dimension. Springfield starts with the forged steel frame and slide. G-10 laminate “thin-line” grip panels, in a handsome blue gray finish, provided a positive rentative grip with gloves and bare hands.

A skeletonized trigger and hammer system break at about 5-5.5lbs. Single action pistols have good triggers as a general rule, but this clean pull through still impressed me. The safety is an ambidextrous lever and the slide is cut with slanted front and rear slide serrations for ease of manipulation. The serrations are deep enough to prevent slipping off the slide while not being sharp.

Topping the RO EO 10mm off is a set of the standard Range Officer sights, a red fiber optic front with a double white dot rear. Both the front and rear are serrated for glare and the rear is shelved for one handed manipulation.

The RO EO’s safety has a positive on and off engagement. The trigger, during dry fire, had a small amount of take up and a smooth press through before a clean break. The reset and press have just a little more travel than my P226 Legion in single action and probably a pound more pressure required.

The backstrap mainspring housing is textured while the front of the grip is smooth. This is typical of the Range Officer line and more than some other options offer for grip surety.

The barrel is a stainless match grade 5″ with a stainless bushing. Recoil spring is on a standard GI style guide rod. Texture on the guide rod asssits with disassembly. Finishing off the frame is a 1913 rail for your favorite light. I added a Surefire X300.

I have been out of the 10mm circles for a couple years, since I sold my G20. I can say now that the 1911 is a fantastic platform for the powerful handgun cartridge. The full steel frame and slide mass are excellent absorbers for the recoil energy of the 10mm.

I found 3 loads from HSM to try in this new pistol. 180 grain FMJ and Hollow Point loads and a 200 grain “Bear Load”.

Certain 1911’s have a reputation with hollow point ammo, it’s not a good one. I started with two magazines of hollow points to see if this pistol fit that tragic mold.

It did not. The HSM hollow points fed and cycled beautifully, punching away at the head box 10 yards away.

No issues, until I got a “click”. The slide didn’t lock back when I finished the second magazine. Not unheard of in 1911 magazines, I marked the side of that mag to keep an eye on it.

Quicker than I wanted the FMJ and hollow point ammunition was spent. Not one failure to feed or fire.

Now it was bear load time.

200 grain flat nose and non jacketed. I loaded the magazine, loaded the gun, and was enveloped in smoke when I fired. I waited for the bay to clear from the powder blast and squeezed again to send another round… dead trigger.

Failure to feed on the bear load. I cleared the stoppage and kept firing. The recoil was mild for a 200 grain in my opinion and may have contributed to a slightly short cycling.

Another dead trigger and failure to feed.

The RO Elite Operator ran without an issue on jacketed rounds but the smokey bear loads and it were not agreeing. I finished the box off with one more stoppage, another fail to feed.

I’m chalking this behavior up to the ammunition, either a little lightly loaded on the powder charge or the flat nose and no jacket didn’t interact well with the feed ramp and chamber.

Accuracy: Excellent, the Range Officer Elite Operator sent a 10mm exactly where I told it too. Errors were mine, not the gun.

Recoil Management: Excellent, 1911’s are a grip sensitive platform and the 10mm is a stout recoiling caliber. The heavy steel frame manages the felt recoil on the shooter very well.

Reliability: Good, with jacketed rounds the pistol fed, fired, extracted, and completed cycling no issue. The reason it can’t be rated excellent is the pistol’s issue with the flat nose rounds. I still place the “blame”, if that’s the correct word, mostly on the ammo. They just didn’t work together.

Fit, Finish, Design: The 5″ ‘Government’ 1911 is a time tested platform and this one is true to form with nothing radically changed. The choice of G-10 grips makes sense, especially for use in wet environments or with gloved hands. The finish was cleanly done and evenly applied over a tightly machined smooth cycling assembly.

Other Notes: The one magazine I marked from Springfield was having the sporadic failure to lock issue with the slide. The second magazine functioned flawlessly.

Under recoil the grip screws like to walk a little and the panels were a little loose after firing a couple hundred rounds. Loctite and retighten, easy fix.

With an MSRP matching the 9mm and .45 ACP models at $1,145, Springfield Armory has a solid contender in the resurging popular 10mm field.