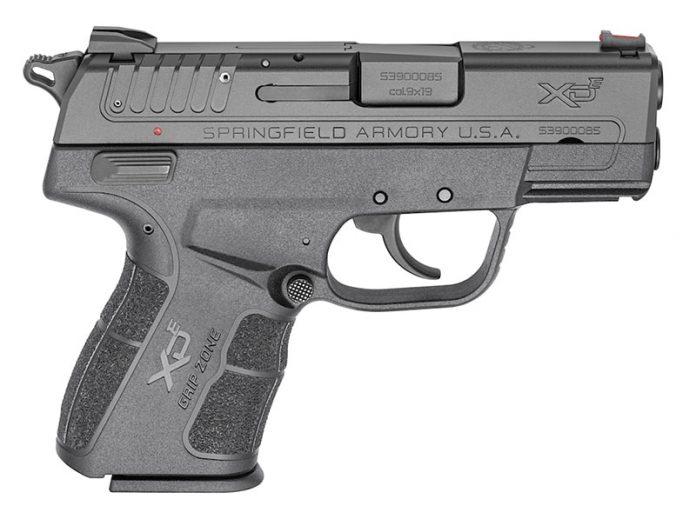 The principle behind the new XDE –– the best elements of Springfield Armory’s world-renowned XD Series, condensed into a pistol that’s intuitive, comfortable and accurate.

The XDE sculpts unmatched Point-And-Shoot® ergonomics into a sleek frame just an inch wide, for hand and holster fit that is extremely conducive to everyday carry. The patent-pending hammer design grants the XDE a Low-Effort-Slide (L.E.S.) that requires 27% less racking effort when compared to leading semi-automatic pistols. Thus, resulting in fewer slipped pulls, sore fingers and missed shots. The exposed hammer clearly shows gun mode, and the single/double action trigger offers options for shooting style. The XDE packs 8 + 1 rounds of 9mm. With the Magazine X-Tension™ the capacity increases to 9 +1. Even the flat-base concealment magazine offers an extended base plate that allows a full grip. Three magazine configurations let you personalize capacity, comfort, and concealability.

“When we listened to the challenges that gun buyers face, it was apparent that many people struggle with the operation of compact semi-automatic pistols,” observed Springfield Armory® Chief Executive Officer Dennis Reese. “We decided to design a compact, safe, and carry-friendly pistol that was much easier to use whether you are a new shooter or skilled gunner. Now, buyers won’t have to make compromises when choosing a self-defense handgun.”

For carry, the XDE delivers peace of mind. The first double-action shot requires an intentional, longer and deliberate trigger pull. After the first shot, the XDE reverts to single-action operation, giving the operator a much lighter, crisp trigger break. The result is improved accuracy, controlled follow-up shots, and most importantly, the confidence to hit a target, even at longer distances.

Supplementing the double-action operation is a combination manual safety and de-cocking lever. Fully ambidextrous, the de-cocking system allows the user to safely lower the hammer without pulling the trigger.

“We firmly believe that a carry gun should be one that users want to take to the range for practice, training, and fun,” stated World Champion shooter and Team Springfield Captain Rob Leatham. “Especially for a gun suited for self-defense and concealed carry, it’s important to make the gun as easy and pleasurable to shoot as possible. That’s exactly what we’ve done with the XDE –– I think shooters will agree, sometimes the hammer can be the most important tool in the tool box.”

The new XDE qualifies for the Gear Up: Magazine Madness promotion when purchased prior to June 30, 2017. Customers will receive free gear including four additional magazines, mag pouch and holster. The free gear valued at $180 can be redeemed online at www.springfieldpromo.com.

“The First Name in American Firearms,” Springfield Armory® was founded in 1777, when George Washington ordered the creation of an armory to store ammunition and gun carriages during the American Revolution. In 1794, the armory began to manufacture muskets and spent the next 150 years supplying firearms for every major American conflict. The original armory closed in 1968. In 1974, the Reese family took ownership of the Springfield Armory® name and began making the M1A™ rifle. Today, Springfield Armory® develops many products loyal to the company’s heritage, like the 1911 pistol, while ensuring its future with innovative products, including the XD®, XD® Mod.2®, XD(M)®, XD-S®, and XD-E™ polymer pistols and now the new SAINT™ AR-15 rifle.