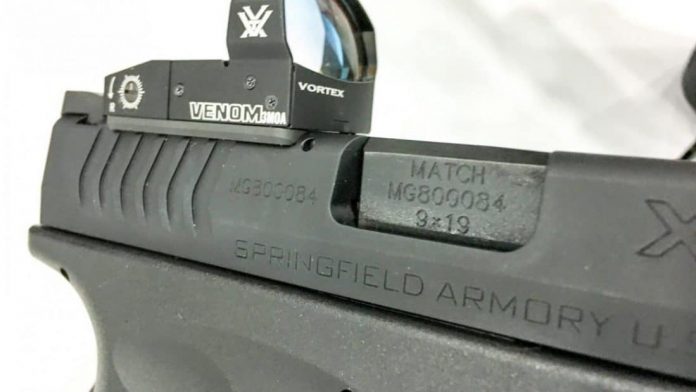 The big news from the folks at Springfield Armory this NRA Annual Meeting and Expo is the new XD(M) OSP, or Optics Service Pistol. Seizing on the market flood of micro-profile red dot pistol sights, Springfield Armory has created a new XD(M) built for direct optics attachment.

The Optical Service pistol is built on the full-size XD(M) platform and includes the expected base features like 4.5-inch barrel 19+1 capacity, and all black finish. The big difference is the milled slide. A mounting “cavity” is cut just in front of the rear sight for attachment of optics mounting plates. As every optic choose a different peg and hold pattern, the mounting plates provide the “conversion” from the optic base to the slide itself.

The OSP is built on the full-size XD(M) frame and slide.

Initially, Springfield Armory is shipping three mounting plates with the XD(M) OSP. These will accommodate the most popular optics on the market including the Trijicon RMR, Vortex Venom, Leupold Deltapoint, Burris FastFire 2 and 3, and Docter Optics red dots. The company intends to monitor the optics market and provide additional adapters as demand warrants. Also included is a cover plate that matches the slide. When customers want to shoot with irons, such as in production division competitions, they can simply remove the optics adapter plate and install the cover, at which point the pistol will be nearly identical to a stock XD(M).

The included Vortex Venom red dot sight has 10 brightness adjustments for daylight or low-light use.

The stand out feature of the XD(M) OSP is that it comes ready for immediate use. The company has partnered with Vortex Optics to provide a Venom red dot sight mounted and ready to go with the XD(M) OSP. The Venom offers a three-minute of angle red dot for clarity in day and night conditions without sacrificing precision. The optic has adjustable intensity with ten different brightness settings.

The Springfield Armory XD(M) OSP ship with two 19-round magazines. Initially, it’s available only in 9mm, but the odds are good that the company will expand caliber, and possibly frame size options in the future. While the pistol ships with an optical sight, irons are still included and installed. The front sight is a red fiber optic tube, and the rear is a ramped two-dot model.

You can order the OSP with or without the Vortex Venom. MSRP for the adapter plates only version is $724. The Vortex Venom model lists for $979. For more information, visit Springfield Armory.