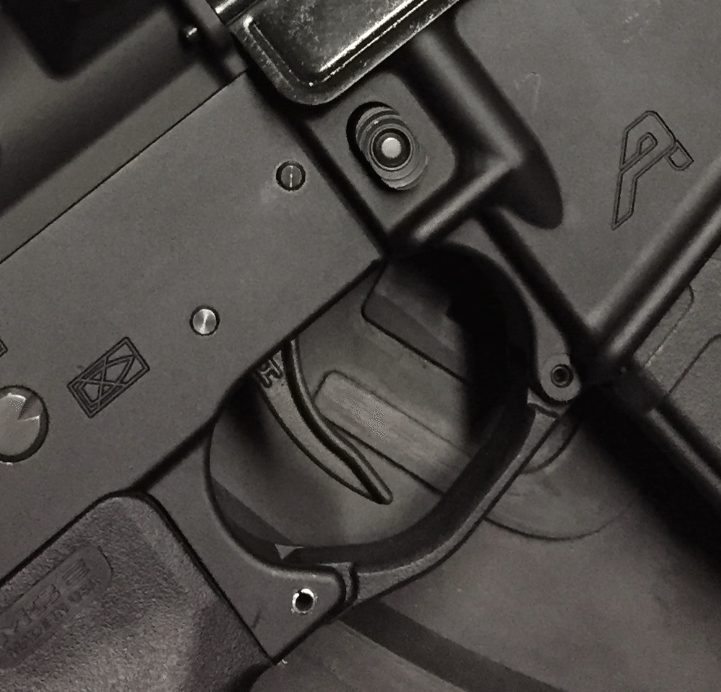 The trigger is the primary interface between a firearm and the person operating the firearm, and is one of the main variables that can determine whether a gun is considered “good” or “bad”. A good trigger can greatly enhance the overall shooting experience and make it much easier to shoot fast and accurately. The common qualities that discerning shooters look for in a good trigger are a desired trigger weight (usually around 5 lbs or more for duty weapons and as low as 2 lbs for competition guns), minimal trigger creep (defined as rearward trigger movement with no sear engagement), a clean break and a short reset. Different types of firearms will have different style of preferred triggers, for the purposes of this review i will be talking only about the AR-15 modern sporting rifle trigger.

The standard mil-spec AR-15 trigger works just fine in my opinion. It is a single stage trigger that usually breaks at about 7 lbs or more of pressure. However it can be gritty and heavier sometimes which is simply par for the course for a mass-produced mil-spec AR-15. Aftermarket triggers improve on the standard mil-spec trigger in several ways that really enhance the feel and performance of the gun. For instance, smoothing out and reducing the weight of the trigger pull makes it easier to shoot without disturbing the sight alignment, and reducing the creep of the trigger should help the shooter know exactly when the trigger will break the shot. Some shooters prefer two-stage triggers over single-stage triggers, but it really comes down to personal preference and how you intend on using the rifle.

I have the most trigger time behind ARs using standard mil-spec triggers, but I do run a 3.5 lb two stage trigger in my competition rifle and i can attest that a lighter trigger makes shooting accurate rapid strings or controlled pairs much easier. The trade off is the risk of accidental discharge when you weren’t intending on firing, which is not something you would want in a duty/service rifle when human lives are at stake, but is well worth the risk of a simple DQ during competition (of course an accidental discharge is always a failure of good personal safety protocols). A smooth, creep-less trigger pull and crisp break is the next best enhancement that a standard AR-15 trigger can benefit from, as it can help with accuracy and shooting rapid strings because you can more easily feel where the break is and accomplish a good clean cadence.

This is where my review of the HIPERTOUCH EDT3 begins. This offering from HIPERFIRE is designed to be the ultimate trigger upgrade for service rifles, and according to the official product page “designed for the broader high performance shooting market typified by three segments: Law Enforcement, NRA-type long-range competition shooting, and the multi-purpose sport, hunting and home defense rifle”. Its important to note that this trigger meets the minimum trigger pull weight requirements of 4.5 lbs for law-enforcement duty rifle and NRA service rifle-type competition. Click here to purchase Your purchase from our affiliate supports Spotter Up!

The Specifications of this trigger are as follows:

Additional engineering innovations of this trigger according to the HIPERFIRE product page include: an improved mechanical advantage* and improved hammer and sear design, which allows the trigger weight to be reduced while maintaining a heavy hammer fall, giving this trigger the added reliability and versatility of being effective for heavier cartridges such as .308 Winchester. The trigger design also include a self cleaning feature that allows debris or fouling to fall through the bottom of the disconnector and away from the mechanism, reducing the possibility of trigger failure under adverse environmental conditions. You can read more about the thoughtful and deliberate design features of the EDT series of triggers on the HIPERFIRE website here: https://www.hiperfire.com/product/hipertouchedt/.

*definition of mechanical advantage: the ratio of the force produced by a machine to the force applied to it, used in assessing the performance of a machine

While it wasn’t necessarily designed with run and gun competition shooting in mind, I decided to install this trigger (with the 4.5 lb hammer spring) on my 3 Gun competition rifle in order to put it through its paces and see how well i could run it under the pressure of competitive timed fire. Installation of the trigger was simple and included the standard trigger and hammer assemblies and their respective pins. However, HIPERFIRE made it easier by including a drift pin tool that holds the assemblies in place while you push the pins into position. This was a nice addition and i was grateful for this small simple tool during the installation process.

I ended up putting about between 400-500 rounds through the rifle in two weeks using this trigger, starting with zeroing a variable power scope and doing some distance precision shooting from 200-300 yards on steel, then moving on to movement drills and rapid fire strings between 10-25 yards. Finally i competed in a 3 Gun competition that included 6 timed stages of mostly CQB and some 50 yd small target shooting.

While shooting, the EDT3 performs like the perfect duty trigger. The pull really does have a “hint of creep”, which translates to practically no creep, then there is a clean break with no over travel and a short-but not too short-reset. It takes the feel and mechanics of a standard mil-spec AR trigger and enhances them to as near perfection as you could ask for from this type of trigger.

It definitely does not have the delicate lightweight pull of some of the competition triggers I’ve used, and i found that my trigger pulls had to be more deliberate to find a proper cadence when shooting rapid strings or controlled pairs. This seems like exactly what you would want for tactical shooting scenarios with a duty weapon. For slow precision shooting this trigger really shines. The lack of creep and a clean break means that your trigger pull starts at the wall, and you simply apply direct rearward pressure to break the shot with no other unnecessary movement. The simple, consistent and smooth single stage action is a great compliment to the AR-15 in a designated marksmen rifle (DMR) role. 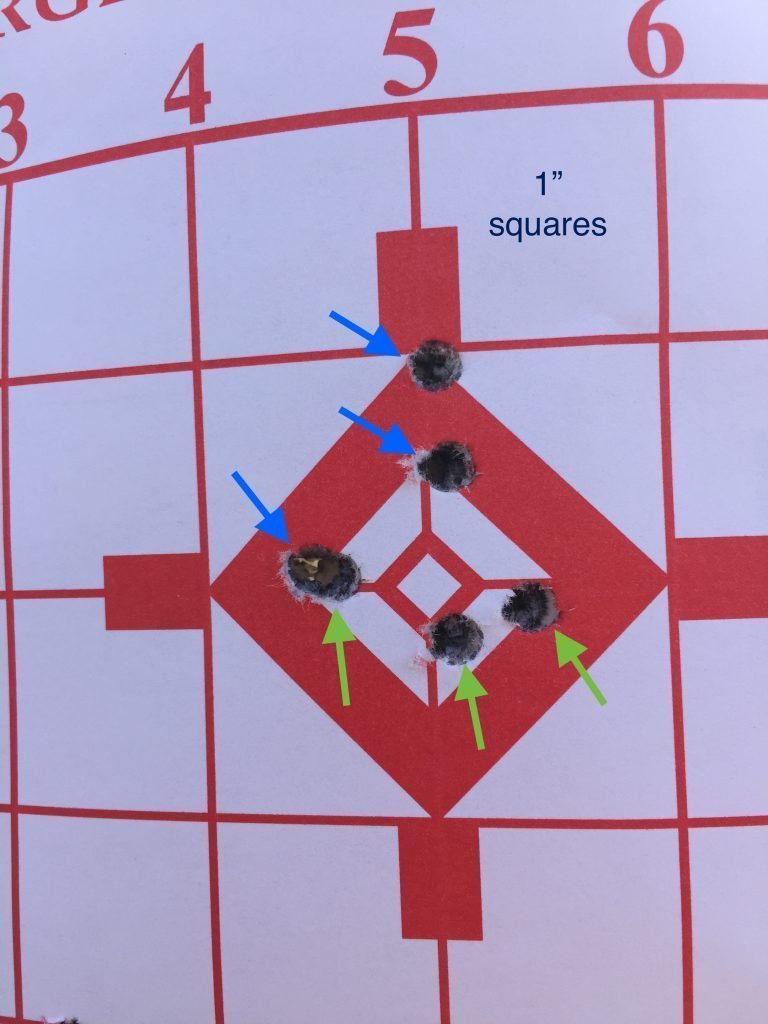 The most noticeable design feature for me was the “duplex trigger bow”, which is designed to give the shooter two options for “tactical” or “precision” shooting. The curved upper portion of the trigger feels like a traditional AR trigger and will give a slightly heavier trigger pull weight for tactical applications. The flat tip of the trigger will yield slightly lower trigger pull weights and is better suited for breaking slower precision shots. I think this is a really cool design and i made sure to try both aspects during bench rest precision shooting and competition. Using the curved portion of the trigger bow was instinctive when shooting fast CQB style on close targets, but when i had to catch my breath after running the length of a 50 yard bay and line up precise shots on small targets, it made sense for my finger to find the flat tip of the trigger to break the slower precise distance shots (which i shot clean). I really love this elegant and effective trigger design.

Overall i think that this is an excellent upgrade for a duty rifle, and i will be permanently installing it into my training/defensive carbine where it is perfectly suited for tactical/defensive shooting. This trigger is a definite performance enhancement for those looking to get the most out of their duty rifles affordably (MSRP $99), while maintaining trigger pull characteristics similar to the standard mil-spec AR-15 trigger.

Material Disclosure: I received the trigger from Spotterup and was not required to write a positive review. The opinions I have shared are my own.

This article comes from our friends at Spotter Up. The author is Joshua Shaw.