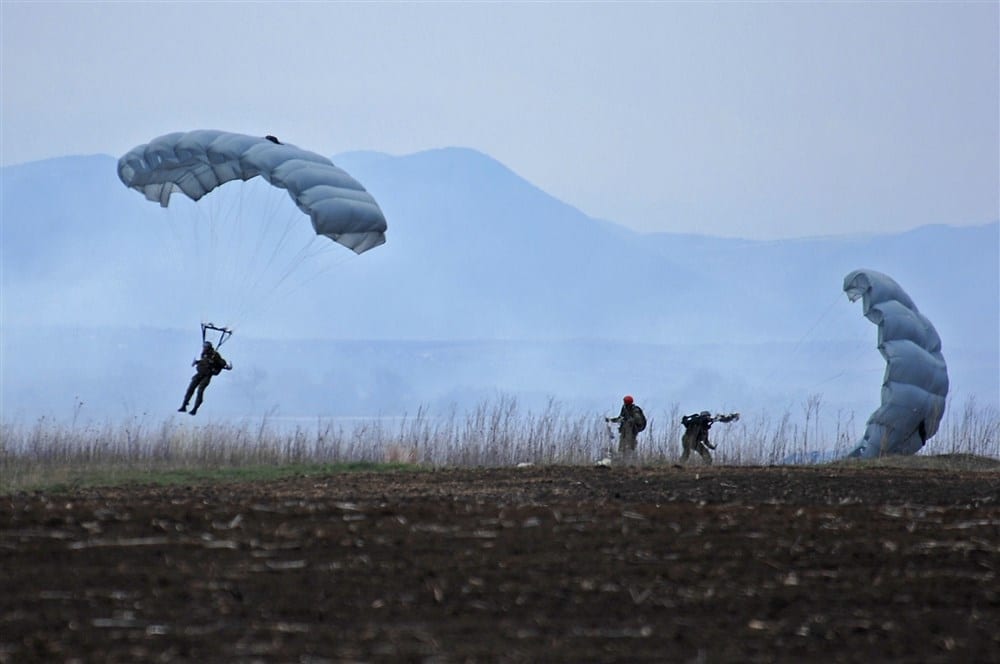 In these incredible pictures soldiers are seen leaping 10,000ft with their daredevil dogs in tandem parachute jumps. One four-legged recruit joined Special Forces troops on a parachute freefall into one of Europe’s biggest military training exercises in Norway.

The explosives sniffing dog, a member of Austria’s version of the SAS, took part in Operation Cold Response along with British Special Forces and Royal Marines assault teams. Securely strapped to his handler and with a muzzle to stop him damaging his mouth on landing, he plunged 10,000ft from a transporter plane over Narvik.

Until now, army dog trainers have had to go through specialist training in order to make the jump with their canine partners. But the Spanish Army has recently introduced the world’s first tandem parachute for dog and handler. In new trials at a drop zone in Santorcaz, Spain, both dogs and handlers have been safely delivered to the ground by the professional parachutist.

A dog specialised in sniffing out explosives was able to leap out of the plane with its owner and a soldier from the Parachute Regiment in the first jump. And in the second jump another dog called Jimy, specialised in tracking and attacking on command, made the leap. Spanish army spokesman Raul Ramon, 45, said: ‘Both dogs were Belgian shepherds. The jump was made from a height of 10,000 feet and the tests proved that both dogs and handler can work properly after the freefall.’