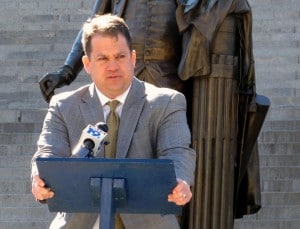 Although the Palmetto State’s legislature does not begin session until January, gun bills are flying during the prefiling period to include two that would block federal gun control measures and a third to take guns from domestic abusers.

The two gun rights bills, both sponsored by South Carolina Senate Republican Lee Bright, were filed Wednesday in Columbia. Titled the South Carolina Firearms Liberty Act and the Second Amendment Preservation Act, in tandem they would effectively nullify what the measures term unconstitutional actions taken by the federal government in regards to infringement of the right to keep and bear arms.

“Every state helps the feds enforce their gun control in major ways,” said Scott Landreth, spokesman for the Shall Not Campaign, a gun rights group that supports similar legislation. “The federal government simply cannot enforce gun control in South Carolina without the help of South Carolina.”

Bright’s bills, on file as S.117 and S.125, are referred to the Senate Committee on Judiciary.

Besides pushing to reject federal gun control measures past, present and future, the language of the legislation provide framework that would prohibit regulation over firearms made in the state. These guns would have to be stamped, “Made in South Carolina” on a central metallic part, and could not leave the state. Likewise, it would establish fines and penalties of up to $5,000 and five years imprisonment for authorities who would enforce federal regulations on these firearms.

This would be the third consecutive attempt by Bright to exempt the state from federal gun laws.

These South Carolina bills join others on the agenda for lawmakers in Texas and Kentucky to debate in coming weeks that take a similar stand to nullify all federal laws and regulations restricting ownership or possession of firearms.

This type of legislation began in 2009 when Montana passed the Firearms Freedom Act, a law that on paper exempts guns made in the state from federal regulations. Although it has been challenged in court and is largely seen as unenforceable in the face of federal gun laws, at least eight other states have passed similar measures.

In 1958, the U.S. Supreme Court rejected these types of so-called nullification laws in which states can choose which federal laws apply to them. However, the same court later ruled that local law enforcement had no obligation to enforce federal gun laws.

Bright for his part is no stranger to staunch support for gun rights. Just weeks after the mass killing at Sandy Hook Elementary in Newtown, Connecticut, he introduced a bill to the legislature that would have created elective shooting classes in state high schools.

He followed this up by offering a Palmetto State Armory AR-15 up for raffle in his failed bid for U.S. Sen. Lindsay Graham’s seat in Washington earlier this year. While Bright garnered more votes than the other half dozen would-be Republican contenders to Graham’s seat did, the incumbent still had enough steam to win both the primary and the general election.

A third Republican-sponsored bill referred to the Judiciary Committee is S.3 that would restructure the domestic violence laws in South Carolina. This would include barring those convicted of such charges or the subject of protective orders from possessing either firearms or a concealed carry permit.

“The idea, as far as I’m concerned, it’s a sensible proposal to eliminate opportunity to continue domestic violence that escalates to death,” Sen. Larry Martin, the Republican chair of the committee told the Charleston Post and Courier.

However, lawmakers in the House see the gun ban as an albatross circling the domestic violence bill.

“I am personally against that,” State Rep. Peter McCoy (R) said. “I think that is going to pose a real problem in terms of being passed.”

The regular session of the 121st South Carolina General Assembly will convene Jan. 13, 2015.