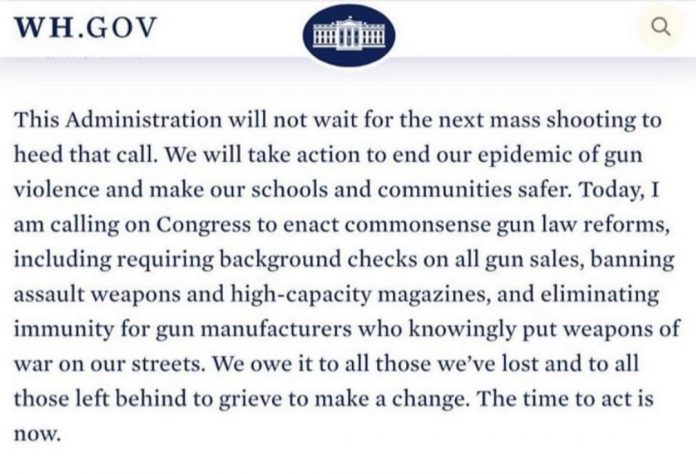 The White House has issued a direct call to action for gun controllers to rally around, and the full press of bad policies are on it… because of course they are.

Ban ‘Assault Weapons’ and high (standard) capacity magazines because… no credible data or study indicates that action would curb shooting deaths meaningfully or with any reliability. No one can credibly claim assault weapons or magazine bans would curb homicide rates. It is the most shot in the dark wishful thinking of proposals, but it certainly earns those feels points.

Make background checks ‘Universal’ because no one would abuse a public access to NICS. This wouldn’t place an undo burden on FFL’s to run checks for people not actually shopping with them, but needing a private transfer. Nor would it impose a financial and time burden on more destitute and vulnerable Americans, making this hurt the poor the most. It certainly wouldn’t be ignored by many as a completely unenforceable mandate, as the ATF and other federal agencies prosecute a meaningless number of prohibited transfer attempts when compared to the number of denies, and have a rather abysmal false positive rate by comparison.

And, of course, allow a direct assault against firearm manufacturers because people misusing their products is their fault directly and every single person employed by the gun industry has a heart filled with hate and evil for daring to make useful life saving tools owned by a hundred million Americans and used responsibly every single day…

Oh, and you have the right to be armed to defend your life, that has be infringed. That is an enshrined right enumerated in the Constitution of this nation and no sitting part of the government, elected or appointed, has the authority to deny you that right unless you give it to them.

Now our watch begins (to quote a great show with a terrible finale) and we must be vigilante, not only of the ridiculous proposals like H.R. 127 which ultimately doesn’t have a prayer of passing, but the proposals slipped in beside it because they look much more reasonable in scale. An old trick.

Universal Background Checks are going to be their goal. It is the most ‘reasonable’ proposal to attempt and the least invasive. It would be a win for them, a big one that they have been promising their demanding mayors and mothers for a long time. It is their most logical next bite of the elephant. It would win them political points without angering their more 2A supporting bases too much, because their voters who own guns still support them widely for other reasons and this will be seen as reasonable. It doesn’t ‘take the guns’ after all and the new owners will not understand the long slow boil that gun control is until they’ve been in the pot awhile.

An assault weapon and magazine ban are the rallying cry, UBC’s are the goal. The current one. Make no mistake, if there is an opportunity to attempt the rest they will certainly exert that pressure, but don’t assume that just because the loudest ideas are moronic that all the people trying to push these policies into place are morons. They are not.

These idiotic, feel good, ‘look at me helping’ policies will hurt millions, save no one, but they will claim it theoretically saved someone. Probably a kid. Then when the next tragedy strikes they will use that as leverage, that they weren’t allowed to go far enough. The next bite. Appeals to emotional feel-goods as ‘common sense’ is another old tactic. The appeal to have to ‘do something’ is too. Expect them all to be used and the useful idiots to line up behind them.

The good news is that Gun Culture 2.0 is switched on and ready to resist this in the information age. We aren’t dealing with a lulled base of gun owners like in the 90’s, when they pushed too far even then. We have an active, better informed, quicker on the digital trigger, base of owners that is larger than ever and fresh off of a world wide event that proved the government is not coming to help you… it is up to you.

So the White House can shout for their gun control base and the anti-gun US Congress critters can clap like the trained seals that they are, but the pressure will come back at them hotter than ever and quicker than ever as they try and weaken the Second Amendment.

Keep an eye on the small moves, removing protections on financial transactions and attacks on the PLCAA. Look for the UBC push as the “reasonable” compromise. And if you voted for a gun controller because the 2A is not a make or break issue for you personally, as a gun owner you must be ready to hold them to account when they put pressure against you.

The 2A is for everyone, which means anyone putting pressure on it is working against your best interests. Period. They are against you, no matter what issues you and they support together, they are attacking one of your most personal and closely held rights as a human being. The right to protect yourself.

Don’t entertain the derisive platitudes of “but we haven’t taken all the guns” or “nobody really needs that” because that hollow lie should concern you greatly. Anytime an entity of power doesn’t want you to have something that can threaten them, you should be suspicious. Anytime the are making emotional pleas instead of using reasoned rationale and logic, you know they are selling you a bill of rotten goods.

Good data stands on its own, and if banning any of what was listed would make a good damn bit of difference that information would be everywhere and solid. Sure there would still be detractors, flat-earthers are a thing. But in reality we have a steady diet of liars using framed statistics and of appeals to emotion over reason. Organizations not wanting to feel the state, federal, or social hammer of displeasure come for them so they parrot the lies to get by. They don’t really have a dog in the fight and can be pointed to as a voice of authority. When you hear doctors supporting gun control it is largely a self-interested move, it doesn’t harm them and might maybe do some good so what’s the harm?

The False Appeal to Victimhood

We don’t stack car crash labs full of car crash victims, we use safety engineers, material specialists, and product designers to pick an incident apart and see if something can be made better/safer/more survivable.

Yet we (or rather the gun control crowd) put David Hogg, a victim, up as a policy authority instead of physical security specialists?

In what other field do we allow emotion to overrun reason like this? Cars? Alcohol? Food? Tobacco products? Each of them has victims involved, but the crash victim of a drunk driver is not seriously entertained if they state vehemently that all cars and alcohol should be banned, or vehicle speeds should be limited, or even that someone convicted of drunk driving once should never be allowed to drive again and that it should be a serious felony to do so.

Yet we (they) allow this leeway, and encourage it, with the far less deadly firearms? Seriously, magnitudes less deadly. 95,000 alcohol related deaths to 39,707 firearm related deaths, CDC 2019.

It’s asinine through any objective lens, but it is our reality to oppose for the next few years.

However, we know our pressure matters. Look at how the ATF reacted and retracted on braces? It doesn’t mean they are done with that topic, but public servants do in fact have to give some credence to the ‘public’ that they serve too. Be sure not to miss an opportunity to make your position politely and firmly known on your state topics and federal topics.