I wrote about the new Army training standards awhile back. I was excited to see the Army finally roll out a training standard that was a bit closer to the ‘train how you fight’ concept than the old one.

But what I missed, and the Army editors whose job it is to check these apparently did too, was the fact that one of the authors slipped in a few well known references at this juncture. Props to Soldier Systems and Gun Grabbing Memes for making my day, and thus yours, more entertaining.

The very next name is Boogaloo. Staff Sergeant Samantha P. Boogaloo, perhaps our ordained leader during the Big Igloo, Luau, or uWu. (I’ve lost track of all the names, they are bountiful) and she will lead us into shenanigans. Who knows.

Then the piece de resistance…

All listed in the example record.

To you, oh bold soldier, I salute you. Meme on oh noble warrior of the internet.

Now the Army pulled the training doc to edit it and remove the possibly “offensive” example names but the original will be available somewhere online for all to find, I am certain. Personally, if this offended you as a serving soldier, I see deeper issues needing to be addressed.

It’s 2019. We live in the era of Terminal Lance and US Army WTF Moments. Our professional fighting forces can laugh a little, and then go chase the head of ISIS down an alley to his well earned demise. 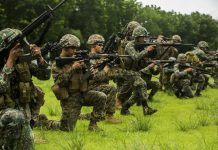