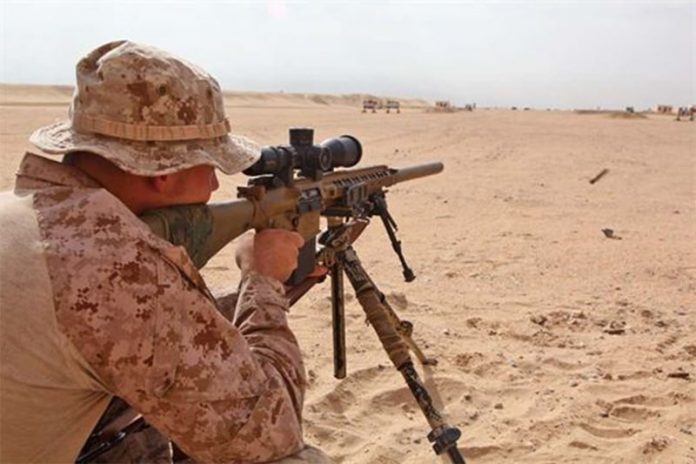 The Surveillance and Target Acquisition Platoon of 3rd Battalion 3rd Marines during the mid 1980s through the mid 1990s had their platoon t-shirts printed with this on it:  Invisible Souls – Leave .308 Holes; my favorite shirt ever.

First, this is in no way a slight on pilots, artilleryman, or anyone else.  This is to point out the idiocracy in maligning the evil sniper; which is actually a phobia – an irrational fear (snipaphobia).

American airmen (all services) have been absolutely brilliant during the recent wars.  They have destroyed more enemy personnel than we will ever know.  I might not be writing this right now if it were not for Marine aircraft and crews.  But you must realize aircraft bombardments, although they are getting better, are an ugly way of warfare, killing as much infrastructure as enemy.  God bless our American aircrews.

FYI, I have never heard anyone call a pilot or their aircrew cowards; in fact they make movies about pilots and their crews, to show their honor, courage, guts, and glory.  This is good because it gives civilians at least a little taste of what servicemen and women go through.

If you are a pilot and you kill 5 enemy planes then you are an ACE; a hero for life.  When your ground crew paints the silhouettes of enemy planes on your plane, well that is normal.  Cool, I agree.  They are all heroes.

Artillerymen; the kings of battle.   Anyone who has ever been on the receiving end of an enemy barrage knows that it is terrifying.  It is terrifying, but the fact is, historically artillery is a weapon of fear more than a weapon of death.  Oh, do not get me wrong, arty kills a lot and they have supported me so many times I could not give you a number.  These are great warriors.

Receive a BDA (Battle Damage Assessment) from your FO (forward observer) reporting 12 dead and total destruction of the neighborhood and start high-fiving each other and dancing around and no one blinks an eye.  It is normal; they have a euphoric feeling of relief that they have done their job protecting your own people.

FYI, I have never heard anyone call an artilleryman a coward; in fact they make movies showing these great warriors in action and it shows their honor, courage, guts, and glory.  This is good because it shows civilians at least a taste of what servicemen and women go through.

I could obviously continue with a bunch of other military occupations, but I am sure you get the idea from my examples.

Most soldiers (soldier used for a service members) who have engaged the enemy in direct combat have no idea how many people they have killed or even if they have ever killed any enemy at all.  Even, most infantryman, have no idea who killed who, because a firefight is chaotic – at best.

So with our air and arty, we have spent Billions of dollars killing bad-guys, plus some unfortunate friendlies, and have done massive amounts of damage to infrastructure.

Over the last 14 years coalition snipers have been highly effective.  Many times sniper put themselves at great risk to protect their fellow warriors.  The Marine Corps has lost dozens of scout snipers during the recent wars.  Per capita the Marine Corps Scout Sniper has a greater chance of being killed than any another MOS.  Understand that there are usually less than 400 scout snipers in the entire Marine Corps and they are not all working in a sniper billets.

What other weapon on the battlefield can actually be used with amazing efficiency and almost no collateral damage?

What other weapon can kill for about $1.00 a kill; that is one dollar?

What other weapon can select its’ target, ensure it is a threat, and then watch as the enemy dies in front of their eyes?  And they (the sniper) know they did it.

What other soldier can shoot an enemy 300 yards, yet in the scope, the enemy looks 30 yards away?  This is trying on the mind.

I could go on.  The point is, snipers are the cleanest weapons on the battlefield.  They select their target, confirm the threat, engage that threat, and move on.

The fact is, Snipers do more destruction through fear than they do with kills.  In the big picture of combat snipers make a very small percentage of the kills.  I’d guess about .000001 percent (obviously I do not know the number).  But when troops fear to move freely on the battlefield because ONE guy got shot two weeks ago, the snipers show their real value.  One sniper could fix a unit in place until his friends show up to finish the job.  Now a days, we will use a couple of teams to dominate an area; I mean dominate.

So, why are snipers called cowards, evil, etc?  If they are the most selective, cost efficient, effective weapons on the battlefield, why are they not honored?  I do not know.

If you are a pilot and you kill 5 enemy planes and you are an ACE your ground crew will paint the silhouettes of enemy planes on your airframe and everyone will call you a HERO; and you are.

If you are a sniper and you cut notches into your rifle stock you are a psychopath.

David K. Devaney SgtMaj USMC Retired 2009 City of Hit Iraq with PTT. David was born in Geneva New York and graduated from Geneva High School in 1980. He joined the Marine Corps on a guaranteed Infantry contract in April of 1983. After graduating boot camp he was stationed in Hawaii with 3rdBattalion 3rd Marines (3/3). While assigned to 3/3 he held billets as a rifleman, fire team leader, and squad leader. During 1986 Corporal (Cpl) Devaney was selected as a member of Surveillance and Target Acquisition (STA) Platoon, 3rd Battalion 3rd Marine. Upon graduation of Scout Sniper School he was assigned to the Scout Sniper Section of 3/3 STA Platoon. During his second deployment as a Scout Sniper with 3/3 he was promoted to Sergeant (Sgt). After a tour on the drill field from 1989-1991 Sgt Devaney returned to STA 3/3 were he deployed two more times. During 1994 Sgt Devaney was selected to the rank of Staff Sergeant (SSgt) and ordered to III Marine Expeditionary Force (III MEF), Special Operation Training Group (SOTG); while at SOTG SSgt Devaney was assigned as a Reconnaissance and Surveillance (R&S) and Urban Sniper Instructor and Chief Instructor. At the time III MEF SOTG Instructors were members of Joint Task Force 510 (JTF 510 CT); a Counter Terrorism Task Force. In 1998 he deployed to Operation Desert Fox with Battalion Landing Team (BLT) 2/4 and was attached to Operational Detachment Alpha (ODA) 572/594 as a sniper. SSgt Devaney deployed again, during 2000, with ODA 135/136/132 to Malaysia as member of JTF 510, working with the Malaysian National Police. After leaving SOTG Gunnery Sergeant (GySgt) Devaney was assigned to Company A 1st Battalion 7th Marine, and spent much of his time training the Scout Snipers of 1/7. Just before the invasion of Iraq, in 2003, he was selected to the rank of First Sergeant (1stSgt) and led 270 Marines, sailors, and soldiers during combat – receiving a Bronze Star Medal for destroying the enemy and their will to fight.