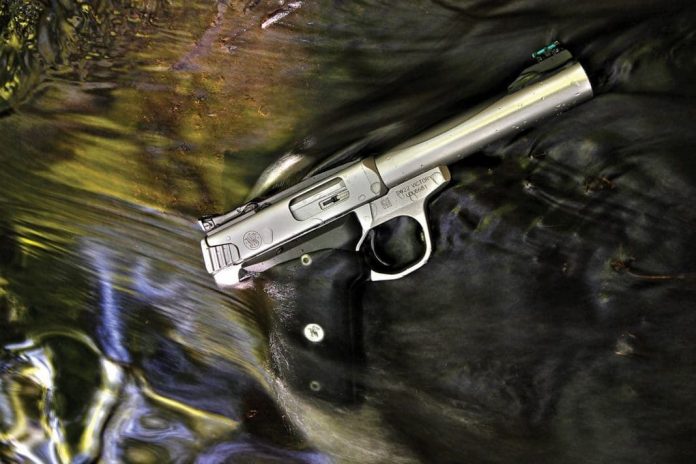 The new S&W Victory .22 is an amalgam of many proven features. A tubular receiver like the Ruger’s, though squared instead of rounded, with a bolt riding therein instead of a slide atop the pistol. A T-shaped grasping apparatus at the rear of the bolt, for the operator to charge the gun or lock it open as needed. The interchangeable but rock-solid-locked-in-place barrel that we first saw on the championship-winning High Standard .22 autoloaders. And an overall shape resembling the iconic Colt Woodsman that debuted over a hundred years ago, but with the pre-WWII Woodsman’s short grip-frame and round butt rendered as a longer round-butt configuration. And the adjustable sights had fiber optic inserts. The heft in the hand was solid, but certainly not too heavy for an adult shooter.

The first thing I noticed when my test sample arrived was that it had a magazine disconnector safety. I’m familiar with the arguments pro and con about this feature. Let me just say that I have no problem with it.

The test gun’s trigger pull averaged 3.54 pounds weighed from the toe, and 4.62 pounds when measured from the center of the trigger. There’s a bit of “backlash” on the Victory’s trigger, but S&W’s engineers have allowed for that, with an adjustable trigger stop built into the trigger itself. The people who designed this gun were apparently serious about good, deliverable accuracy.

I went with my usual testing protocols. Concrete bench with Caldwell Matrix rest. 25 yards. Measuring each 5-shot group center to center to the nearest 0.05” between the farthest apart shots, then doing that again for the best three hits in the same group.

This test sample shot a good four inches high at 25 yards using a post-in-notch sight picture, and centered about an inch or so left. Fortunately, it came with adjustable sights. The gun came out of the box with the rear sight cranked way up, clearly accounting for the disparity in elevation between point of aim and point of impact.

My dwindling hoard of .22 LR rounds only contained three brands designated as “match” ammo. One was Federal AutoMatch. The five shots measured 1.75”. The best three, however, were in exactly half an inch: 0.50”. That’s promising.

Another match-grade cartridge lives up to its name is CCI Pistol Match. The test Victory consumed the last five of these cartridges I had and I did my best to live up to them, but the group spanned 1.25” for all five shots. That would bring a smile to my face with a center-fire service pistol, but not so much with a .22 target pistol. However, the best three were in 0.85 inch.

The star of the accuracy test was the load from the Winchester Supreme Match. All five shots were well under an inch: 0.85”, to be exact. And the best three of those were in 0.40”. That was enough to make this old man happy.

When I talked with S&W reps at SHOT Show when this pistol was introduced last January, I heard them use the phrase “dime size groups” when asked about its accuracy.

With the “dime” thing in mind, I later fished in my pocket for change and dug out the Victory .22 target I had just shot from the 25-yard bench. The dime covered the “best three” in the AutoMatch group. Ditto the best three with CCI Pistol Match. And that dime would have swallowed four of the five hits in the Winchester Supreme group. Suffice it to say that the S&W Victory is an accurate .22 pistol.

One definition of “value” is what’s delivered for the price. We found this pistol to be 100% reliable, a non-negotiable baseline of handgun value. The Victory series starts at $409 MSRP.

I personally think the Victory has a better trigger pull than what I’ve found on Ruger .22 auto pistols since 1959, and in an economy priced, entry level “starting choice” for a .22 target pistol, I’d have to give the S&W Victory the nod right now. Given that in the S&W catalog, for the price of one premium grade Model 41 target pistol you can buy a Victory .22 for yourself, a second for your spouse, and a third for your kid and have some money left over for ammo, I would again give the nod to the Victory model Smith & Wesson .22 target pistol. Once you start winning trophies and moving up in your marksmanship classes in competition and feel the need for a more refined trigger pull and balance, the more costly Model 41 will start to have added value.