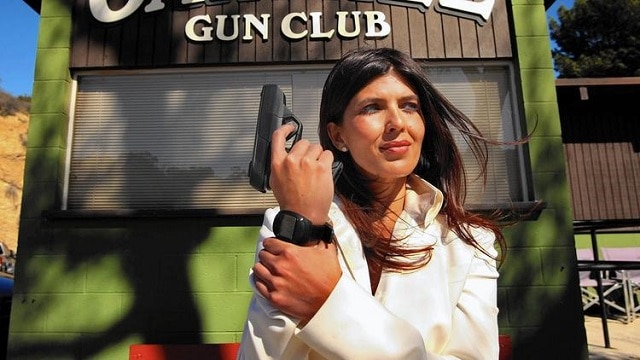 When you say “smart gun” in the past few years in the United States, the first company likely to spring to mind is Armatix, a German-based firearms concern that has been pushing their iP1 pistol, which uses a RFID-equipped watch that, once it is further than a few inches from the gun, locks out the gun.

The company has had its ups and downs, mainly downs, and although championed by left-leaning politicians and former U.S. Attorney Generals, is facing bankruptcy due to its inability to sell many of its guns in the states.

According to an image tied to an article that ran in Tuesday’s LA Times, however, the company that bills itself as perhaps the safest in the world may have issues with basic firearms safety rules.

The image shows Belinda Padilla, chief executive of Armatix USA Inc., based in a strip mall in Los Angeles, with one of the company’s iP1 pistols at the Oak Tree shooting range, which controversially stocked the gun in early 2014.

Padilla in the photo breaks at least two out of three of the National Rifle Association’s Rules of Safe Gun Handling.

Courtesy of the NRA:

1. ALWAYS keep the gun pointed in a safe direction.
This is the primary rule of gun safety. Never pointing a gun at yourself or others ensures that it will not cause harm if it goes off. When outdoors, point the gun toward the ground or towards the target. If you are indoors, be mindful that a bullet can penetrate ceilings, floors, walls, windows, and doors. Use common sense to dictate the safest direction.

3. ALWAYS keep the gun unloaded until ready to use.
When you pick up a gun, immediately engage the safety device and remove the magazine before opening the action and checking the chamber(s). If you do not know how to open the action or inspect the chamber(s), leave the gun alone and get help from someone who does.