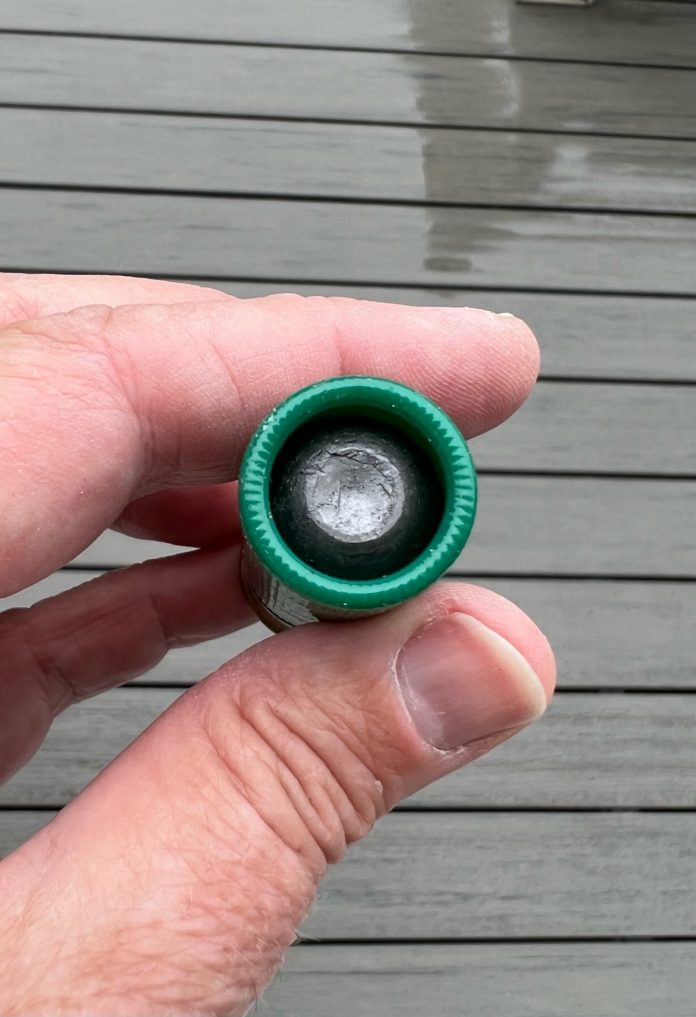 For today’s post I thought I would talk a bit about the vagaries of the English language. Wait don’t go to sleep yet, I promise I’ll try to keep it interesting and fun.

For instance, if I say the word “slug” what comes first to your mind? This page being what it is I’ll bet you think of a large rounded piece of lead commonly fired out of a shotgun, right? Well, that’s one definition out of many that come from Merriam-Webster, which actually says, ”a lump, disk, or cylinder of material (such as plastic or metal): such as a(1): a musket ball (2): BULLET’

That type of slug isn’t actually my favorite though. In fact I’ll wager that almost anyone who has taken a defensive shotgun course with a pump gun will agree – 12 gauge slugs are not a lot of fun to shoot in rapid succession. Unless you get the giggles making ridiculous size holes in your targets, which is admittedly legit. I just prefer not to be in a sling the day after a shoot.

I’ve got a silly variety of 12 gauge slugs which I’ve tried over the years for 3-gun and defense, trying to find something that is accurate-ish and doesn’t beat me up too much. Despite those efforts and acknowledging that there is a niche for them, I STILL don’t love them. But there are other slugs with which I am familiar as well.

Another definition of slug you may have thought of is a verb – as in to slug someone with a fist. I have not personally had the dubious pleasure of giving or receiving such since childhood. But having been raised with brothers and neighbor boys it was definitely a thing. In fact I remember my father saying he heard his sweet little five-year-old daughter yelling “I’m gonna SLUG you!”, and he knew she wasn’t so sweet anymore. I have been admittedly fortunate in my life that this hasn’t happened since childhood. I would imagine that the memories of many of you aren’t quite so charming, however.

Yet another definition that may go well on this page is “A quantity of liquor drunk in one swallow”. The previous definition above is sometimes known to happen after several episodes of THIS definition. Some of you may be familiar with that as well. That’s probably enough said, right there.

There’s also the definition of slug which comes from it actually being a shortened form of “sluggard” – a lazy worthless person. I’m sure we all know a few examples of that as well.

Then there is the definition which caused me to think of writing this article. Given all my endless gardening posts I need to mention,

“: any of numerous chiefly terrestrial pulmonate gastropods (order Stylommatophora) that are found in most parts of the world where there is a reasonable supply of moisture and are closely related to the land snails but are long and wormlike and have only a rudimentary shell often buried in the mantle or entirely absent.”

Yes, garden slugs have arrived on the scene in my cultivated paradise. The slimy little b@stards were eating my snap peas and cabbage, and I had to break out the soapy bucket of death in which to drown them. I’ve had my share of garden pests over the last few growing seasons but slugs are a first. Ewww.

It’s been a pretty rainy spring, and I think that the raised beds and containers have been in place and amended often enough and long enough now to no longer be just store bought potting soil – they are now part of the ecosystem – to include “terrestrial pulmonate gastropods”. I’ve been told beer can help, but I found out afterwards that I was supposed to set it out for the slugs, not drink it myself. Oh well, better luck next weekend.

But after all of those, by far my favorite definition of slug from the dictionary is:

“: the gravitational unit of mass in the foot-pound-second system to which a pound force can impart an acceleration of one foot per second per second and which is equal to the mass of an object weighing 32 pounds.”

I know I was lying awake nights wondering about that, so if you were too – you’re welcome.

Come to think of it, you might use that definition of slug to win a bar contest, after which a customer who has had too many slugs may choose to slug you, forcing the bartender to bring out his slugs to calm things down and throw both of you sluggards out of the bar.

Given all of those slugs from which to choose, which one is YOUR favorite?