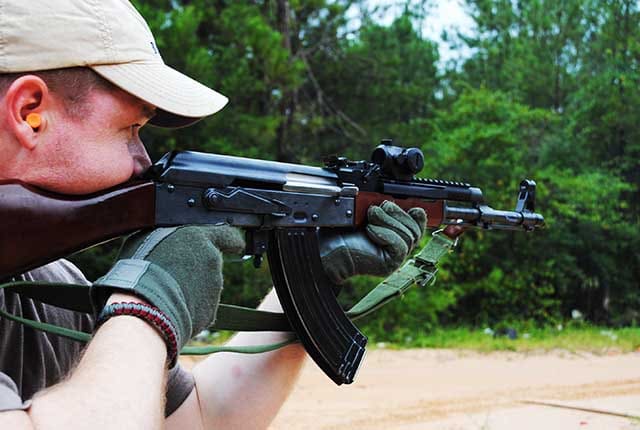 Half the fun of collecting guns is accumulating the stuff that goes with them. In the case of military rifles like the AKM and its numerous civilian-legal clones, the gear and accessory choices are nearly endless. With that in mind, here are six items I consider “must-haves” to maximize your 7.62x39mm AKM rifle setup.

Shooting an AK at a square range is a lot of fun, and it has the advantage of allowing you to keep your magazines in a range bag on the bench, but if you want to shoot 3-gun matches or take training classes, you’ll need a way to carry reloads. That’s where the chest rig or load bearing vest comes in.

Standard issue belt pouches work well enough, but are heavy, uncomfortable and tend to drag a shooter’s pants down when stocked with loaded mags. A chest rig will help distribute that weight more efficiently, and leaves more real estate on your belt for other gear.

Eagle Industries Universal MOLLE chest rig, my current favorite, is a set of two Condor MOLLE pouches that hold a total of eight 7.62×39 magazines. If you’re on a budget, the Chinese three cell AK chest rig is a solid design that was used and even copied by the Soviets in Afghanistan can still be found for as little as $20. Custom and semi-custom designs take the chest rig concept even further, and several vendors deal in hard to find, but well-designed Russian load bearing gear that is purpose-built for this venerable weapon.

There was a time when surplus AK magazines were so cheap and numerous that most people couldn’t believe we would ever run out. Ban scares and import restrictions, coupled with the increasing popularity of the AK platform have combined to make prices go through the roof for magazines that used to be dirt cheap. I bought my first Chinese AK magazines for $2.99 a piece from Classic Arms in 1993. Those same magazines are going for almost $30 each now, and have attained somewhat of a collector status, but all is not lost!

So many countries produced AK variants that surplus magazines are widely available, and importers are unearthing new surplus  magazine caches every day. There have been recent imports of surplus Yugoslavian, Romanian, Polish, Bulgarian and Russian magazines, as well as new production commercial Croatian magazines that can be had for as low as $10 each. The best thing about AK magazines is that even rusty, well-loved mags work as well as brand new ones with a little TLC. That’s the beauty of the Kalashnikov system – it takes serious abuse to stop it from working.

Every new AK comes with a cleaning kit, and while pretty basic compared to new commercial kits, it has several neat features that aid in rifle disassembly.

I made my own cleaning kit by combining the standard AK toolkit with an old USGI weapons cleaning kit, and I take it with me every time I go to the range. It’s very handy to be able to run a wet patch with bore solvent through the bore and gas system, so that the stuff can be pre-cleaning on the trip home. A good cleaning kit will have oil, solvent-patches tools a sectional rod and appropriate brushes for a weapon.

Additionally it should be in a MOLLE-compatible pouch that goes with you and your weapon everywhere. Another good option if you’re on a budget is to use the East German “tobacco can” cleaning kit, which is a high quality kit that you can tailor to your needs quite easily. These kits can be found for as little as $4 apiece, and are just the right size to stick in a pocket or pouch.

As a collector, I tend to use the standard AK slings that are specific to the rifles I own, and I’ve found them to be solid, reliable slings that get the job done. For those who prefer to take it up a notch, there are several companies making neat adapters and single, two- and three-point slings for these great rifles.

Regardless of what type or make of AK, or what kind of shooting you do, a sling is a great thing to have if you have to walk or run any appreciable distance with your weapon. For some weapons, you’ll need a sling adapter of some type, but those can be purchased or made very easily. Just be sure your chosen sling actually makes carrying the rifle easier, and is durable enough for hard use.

The AK is notoriously hard to mount a scope on, as we quickly realized in the early days when imported rifles had no side rails or other methods of scope attachment. There have been a number of ingenious developments in optics and mounting systems for the AK platform, and now shooters have everything from receiver cover mounts to handguard rail systems that can accommodate all sorts of optics, lights and accessories available.

My two rifles, a pre ban Chinese Type 56 and a Maadi MISR-SA both wear UltiMAK rails and the excellent Primary Arms MD-06 micro red dots, and this setup is tough to beat for the money.

Half the day is night time, so why wouldn’t you have a way to light up the things that go bump in the night? The rail systems available today, coupled with the excellent lights, night vision and mounting systems, can help make your AK into a formidable night fighting tool with a solid 7.62mm punch. A flash suppressor (as opposed to a muzzle brake) is a must-have for such a setup, as un-suppressed AKs tend to throw enormous fireballs out the muzzle at night, blinding the shooter.

Proper target identification is worth every penny, and good weapon lights are getting more competitively priced. Finally taking the sting out of outfitting a weapon to its fullest potential. My Maadi will be soon be sporting an Vltor low profile light mount, coupled with a Surefire G2 LED, which will complete the mods I have had in mind, at least until something better comes along.

As with everything else these days, prices on AK variants and the numerous AK accessories have gone up quite a bit, but this is due in part to the huge increase in consumer demand for rifles that used to be scorned as “inaccurate commie junk.” That said, good deals are still out there, and a smart shopper can still put together a really good complete rifle kit with magazines, ammo and all the rest for less than $700.

Amazingly reliable and more accurate than they’re given credit for, these rifles are great for first-time buyers and still relatively cheap to shoot. Just like when you’re eating potato chips, once you buy your first AK, it’s hard to stop with just one, and there are still good deals out there that will allow up-and-coming shooters to enjoy the fun without breaking the bank.