SIPA is one of the youngest agencies in Bosnia and Herzegovina law enforcement created with one goal – to counter terrorism and organized crime on state level. SIPA stands for State Investigation and Protection Agency. They were trained and equipped with support of western countries. After SIPA was created, there was a need for a their own special unit which will support the work of main parts of agencies, like the Organised Crime Department, Department for War Crimes and similar because they was dealing with dangerous persons, war criminals, kingpins, members of organized crime, drug dillers and all other bad guys.

In 2005, the agency created their own special unit named “Jedinica za specijalističku podršku” what means “Special Support Unit”. First members where trained by United States instructor and they spent some time abroad, in United States. Unit is well-trained and well-equipped, one of most elite in Bosnia and Herzegovina. From the 2005 to now, they conducted few thousands of raids and dangerous arrests.

They are made from three units, Alpha, Beta and Gama. First two units are ordinary SWAT teams with offensive tactics, and the third one Gama, beside ordinary tasks, has specialties like Scuba Diving, Sky Diving, alpine climbing.

The new members, who apply for special units, are coming from other Bosnia and Herzegovina law enforcement units. They are going through excessive medical, physical and mental evaluation during 7-days course, and only toughest are welcomed to join the unit. After the new members enter unit, they are newbie’s, what means that they are not involved in operations for six months after join. In that six months, they are going through basic special training for this special unit, whey they learn basics of tactics, shooting, marital arts and similar techniques used by such type of unit. Their goal is to became specialist and take place in one of the teams. After they finish their basic training they are assigned to the teams where they working in their further training and need to choose one specialty. 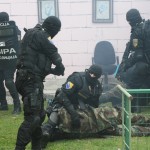 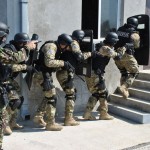 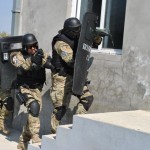 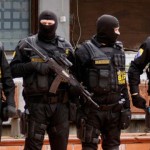 The special support unit is equipped with various weapons. From assault rifle, in their inventory they have M21 Zastava and SCAR. As submachine gun they prefer Heckler and Koch MP5. They also use and conduct training on other weapons such as a sniper rifles, shotguns, anti-riot guns, grenade launchers and similar. For sidearm, they are using Austrian GLOCK 17.