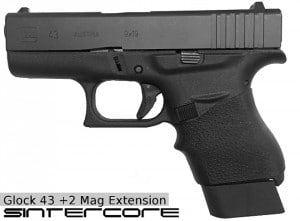 Sintercore, the company behind the world’s first commercial 3D-printed Inconel alloy flash-hiding muzzle brake, is following up on the groundbreaking work with a real crowd-pleaser, the 3Dplus2, an extended magazine for the Glock 43.

Like the 3DX brake, the 3Dplus2 is 3D-printed, but with a composite better suited for the polymer pistol. The 3Dplus2 is printed with carbon-reinforced nylon designed to exceed the factory magazine components and is “tougher than the magazine itself.”

The extension add two rounds to the concealed-carry pistol, bring the Glock 43 capacity up to 8+1 rounds of 9mm Luger. It also extends lower than the standard baseplape, providing extra finger space for a better grip and more control over the single-stack subcompact.

The magazine extension was developed for Sintercore with the help of Erich Mutchler. If the name doesn’t ring a bell his work as a pioneer in both 3D printing and firearms might be more familiar. Mutchler is the man behind the world’s first 3D-printed stainless steel and Inconel .45 ACP 1911 and the limited edition Reason series that followed it in 2013.

With 3D-printed parts standing up to real-world abuse it’s no surprise that we’re seeing more of this technology in commercial manufacturing, not just rapid prototyping and proofs-of-concept. It’s fast and easy to get a design into production even if you have to make changes because you can do on the fly between prints.

This is much faster than traditional manufacturing techniques, which have a much longer development time. It can take weeks and months to get a polymer mold up and running at full speed, all of which adds to the cost of the system. 3D printing has a higher cost to the manufacturer per-unit but the overhead is all in 3D printers, which are a one-and-done expense.

While 3D-printed parts typically carry a price premium over parts made using conventional systems that’s not the case for the 3Dplus2 Glock 43 magazine extension. Pre-orders are priced at $19 per extension and the extensions are drop-in upgrades, requiring no additional parts or components and they work with factory magazine springs.