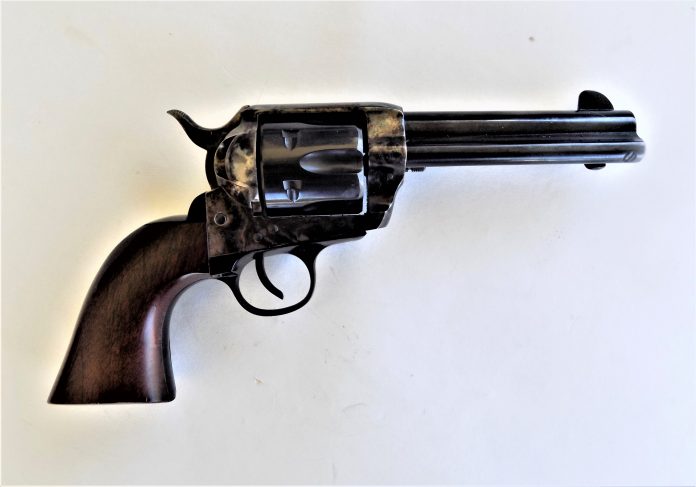 They need to stop encouraging such tactical misapplication.

Don’t get me wrong the SAA is a great recreational firearm with much history behind it. But there are much, much better choices for personal defense. That new fangled double action revolver is among them!

A point in fact to study. In 1858 Starr firearms introduced a quality solid frame revolver with good sights, a relatively smooth action, a safety notch making carrying the revolver fully loaded viable, and excellent accuracy to 100  yards per period testing. The Starr was perhaps the Les Baer of its day. Starr went out of business because it could not sell its revolver as cheaply as Colt! The Starr made all single action revolvers obsolete. This was a long time ago—

The single action requires the hammer be cocked before it is fired.

This is a set of problems. As the revolver is drawn the thumb rears the hammer to the rear. You don’t do this in the holster, but you begin cocking the hammer as the handgun is getting on target. Once cocked, you have a nice short trigger press. (Leg shots are not humorous and the reason that fast draw shooters use blanks.) Then fire the piece until empty, once it is empty you will resort to tactics used during Cro Magnon times as the revolver cannot be quickly loaded.

The loading gate must be opened and the cartridges knocked out with an ejector rod one at a time. Hopefully you will have chosen a modern revolver of good steel and one with a transfer bar system that allows carrying the piece fully loaded. No matter how good you are- and many who engage in single action shooting in Cowboy Action Shooting are pretty smart with the old single action- a less well trained individual with a double action revolver is faster.

I understand the revolver has many applications, particularly in outdoors use. As an example the big cats and bears typically attack suddenly and go for the upper body. Those who have saved themselves from these attacks have done so by jamming the handgun into the beast’s body and firing repeatedly. A self loader would jam. It is difficult to work the single action hammer when the wrist is bent around in this manner.

I like the balance of the SAA and once carried a real Colt when hiking and on the trail. I like the way it sets and hangs on the hip. A 4 ¾ inch barrel SAA is no more difficult to carry than a 4 inch barrel .38. But a quality .357 Magnum totally outclasses the SAA .45 for field use and concealed carry. A few minutes on the range solidly confirms this.

Nostalgia is great, don’t get me wrong, but the pundit actually advocating for this handgun isn’t doing the reader any favors. Slow to load, unload, fire and handle, the SAA has seen its day and was obsolete by 1907 for any practical use. The Mexican Revolution kept the SAA going twenty years past its prime! Don’t get caught up in this hardware. Take the time and ammunition you would expend mastering this old beast and apply to more modern technology. You will be glad you did!

Lever action cowboy rifles are a different matter. While they are far inferior to the AR rifle for personal defense, they still have mechanical merit. Sometimes called the Brooklyn Special they are available and acceptable in places handguns and AR type rifles are not, due to laws and mores. The lever action is flat and easy to store and snag free coming into action. The piece is reliable, accurate, hits hard and offers good handling. The cowboy ‘assault rifle’ has much merit in many situations. Affordability was once an advantage, but today a good quality lever gun is more expensive than ever.

The AR is starting to look even better.