We use the latest hardware to bolt together a performance Ruger 10-22 that won’t break the bank. 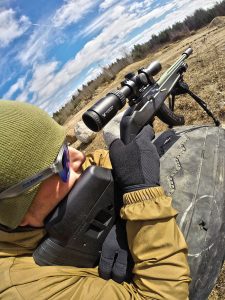 When Bill Ruger introduced his blowback operated, semi-automatic 10/22 rifle in 1964, it was an instant success. With over 5 million sold since—in seemingly countless variations—it has been a mainstay of the Ruger brand for over 50 years.
The original 10/22 was chambered in .22 LR, but Ruger also produced a .22 Magnum version from 1998 to 2006 as well as a .17 HMR model from 2004 to 2006. All current production 10/22s are available chambered only in .22 LR.
Every member of our staff has either owned—or currently owns—a 10/22, and they all have nothing but good to say about the rifle. It’s light, fast and reliable, and is equally well suited to plinking or small game hunting.
This project involved taking a staff owned 10/22 and upgrading it to a ultra-precision .22 rifle for target shooting and hunting—quickly and inexpensively—by retaining the existing receiver and bolt group and simply fitting it with a new precision stock, barrel, sound suppressor, Ruger BX-Trigger, and adding a variable power riflescope.

The key ingredient in this build was the barrel, so the first task was to remove the factory stock. Then the factory barrel was taken out—a process which involves nothing more than removing two Allen head machine screws and pulling the barrel forward and out of the receiver. The hole deal took about two minutes.

For a replacement barrel we chose a Green Mountain Rifle Barrel Co. 18-inch, stainless steel, fluted precision bull barrel (.920” outside diameter) in Army Green ($193.95) rifled at a 1:16” twist rate. We seen outstanding performance from Green Mountain’s 10-22 and AR-15 barrels with previous builds, and this one proved no different. Founded in 1976, Green Mountain Rifle Barrel is now the largest independent barrel manufacturer in the country, and supplys barrels to more than a handfull of O.E.M.s.

Since it’s getting to the point that whenever a limp-wrested liberal hears a gun shot around here, they call the cops, so we wanted to equip our project gun with a suppressor. Green Mountain’s barrel threading option is only $75, and enabled us to mount our Gemtech G5 .22LR suppressor and Q.D. mount. The new barrel went in just as fast as the factory barrel came out, and now we were ready to install the new trigger assembly.

Ruger’s new BX-Trigger ($89.95) is a drop-in replacement for the factory trigger group on any 10/22 rifle or Charger pistol. Installation is quick and simple with good written directions provided and an installation video on Ruger’s website (www.Ruger.com/BX-Trigger). The BX-Trigger provides a crisper, lighter trigger, with a pull weight of 2.5 to 3.0 pounds, with minimal overtravel and positive reset. Being “experts,” of course, we didn’t bother watching the video, and had the new trigger group installed in less than two minutes. And it’s an excellent trigger—way better than the relatively heavy, sort of mushy factory trigger—and a “must-do” precision upgrade to the 10/22.

We chose the Magpul Hunter X-22 full-length stock for our project gun. Made from high-quality, reinforced polymer, it’s available in black, flat dark earth, stealth gray or OD green (all $139.95). The Hunter X-22 features an ergonomic pistol grip, adjustable length of pull and adjustable comb height to fit virtually any shooter, as well as multiple sling mounting options, a non-slip rubber butt-pad and M-LOK slots on the forend sides and bottom for accessory attachment. It fits standard 10/22 rifles with no gunsmithing, and a reversible barrel tray ensures proper fit with both factory pencil profile and heavy bull barrels up to 0.920” diameter.

The Hunter X-22 is a truly “drop-in” stock, and employs the standard Ruger factory stock bolt for attachment. Dropping in and securing our newly barreled receiver was a one-minute task. Made in U.S.A., it features a 60 degree grip angle (from the bore axis) and employs four 1/2-inch spacers forward of the grooved rubber butt pad to permit adjustment of length of pull from 12.5 to 14.5 inches. It weighs 2.45 pounds and has left and right rear 1.25-inch Footman’s Loops for sling attachment. It also includes two dimpled drill points for installation of standard sling-swivel studs (10-32 x 3/8” long-$dome stud) and is compatible with push-button QD swivels in the rear using optional Magpul Sling Mount kits.
The Hunter X-22’s comb can be removed and replaced with optional Cheek Riser kits that will increase the comb height by 0.25”, 0.50” or 0.75” for use with high-mounted optics. And it will accept all capacities of factory Ruger 10/22 magazines.

To put our newly assembeled rifle to the test and see how our ingredient list stacked up, we set up at 50-yards with four different brands of www.vortexoptics.comready to run through it. The best performance from all didn’t exceed the one-inch mark for five-shots, but the standout load was the Eley 40-grain-lead Subsonic (which you can read about elswhere in this issue), printing an impressively-small 0.40” cluster. Runner up was the Aguila 40-grain-lead Super Extra load at 0.72” for five-shots; this barrel showed a distinct prefference for non-copper-jacketed ammunition. No malfunctions whatsoever were recorded. Success!