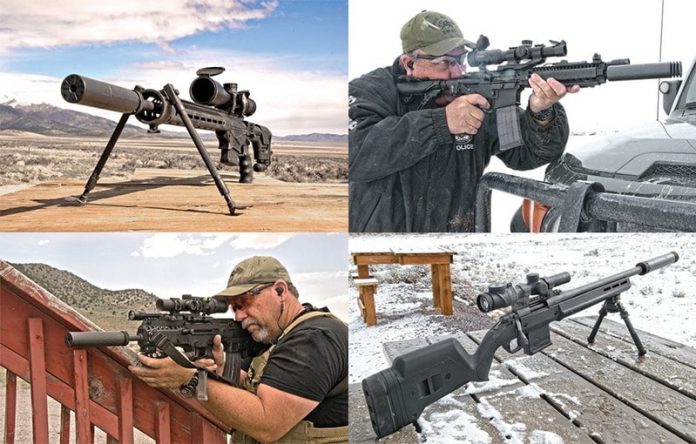 Suppressors are finally gaining the recognition they deserve as a means to enhance your shooting experience. The only people left considering them evil assassins’ tools are the anti-gun crowd. Most of that ilk wouldn’t know a suppressor if they saw one, are against anything gun related by default, and their ignorance about anything firearms related shows itself every time they speak. Nothing will change their minds, but thankfully outside media and politics they are few…it’s a voice amplified by the primarily anti-gun mainstream media and political left. The middle however, even those who don’t use guns frequently, have started to figure out suppressors have value. While no panacea of perfection, they offer advantages given the intended use, many of which fall outside the tactical, military, and law enforcement realm. Home defense and hunting are amongst the most beneficial, but they are also perfect for new shooters, or just fun on the range. Like any tool, they perform as designed, and suppressors are better now than ever; lighter, quieter, more efficient, and even less costly as they continue to improve. Maybe the most beneficial change of late however is versatility.

Like any costly tool, the more it will do the better. Having customers save for a year or more to buy a suppressor was the norm for years, only altered by the frenzy brought on by the fear of a ban. Well, the frenzy is over. Coupled with the fantasy of the Hearing Protection Act passing in the near future the buyer has become far more hesitant to part with his money. Buyers are also better educated about suppressors. It takes more than a slick brochure, cool website, and polished sales pitch to sell them. Suppressors have to actually work. The more they do and better they work the more likely they are to sell. Most can only afford one and it needs to be versatile. One of the most versatile today is the SilencerCo Omega.

Introduced in 2015 the Omega 300 was billed as “the best of all worlds”. Acquiring one shortly after their introduction I have spent the last couple years testing that theory. Rated up to and including 300 Winchester Magnum, it can be configured as a direct thread or quick connect using the ASR mount. Front attachments include a flat end cap or a brake of sorts with ports. Using the direct thread and flat end cap nets a six inch suppressor. Adding the ASR mount extends it an inch, the brake another inch. Use both and its right at 8 inches OAL. Made of Titanium, Stellite, and stainless steel it weighs in at 14 ounces. Priced at $1,130 retail, it is within reach of most, especially given its versatility. ASR muzzle brakes and flash hiders are available threaded to fit everything from a 22 LR to 30 caliber too include 9/16 x 24 LH. The Flash Hider adds 15mm x 1mm RH. End Caps are available in 5.56mm and 7.62mm. Direct Thread adapters accommodate typical 5.56mm and 7.62mm thread patterns and include M18 x 1mm, M18 x 1.5mm and 5/8” x 24. All of these attachments can be swapped around with tools included with the suppressor. About the only thing you can’t get is a M14x1mm LH for an AK. That system is just so inconsistent the risk of baffle strikes means SilencerCo will not sell one. It can be adapted with care to make sure it is centered, but not from SilencerCo.

This Omega has seen use on at least a dozen different rifles over the last couple years ranging from 5.56mm to 300 Win. Mag. Both direct thread and ASR attachments have been used, to include adapting it to fit a couple of AK47 rifles. It has been a workhorse and go to for several tests and articles. Most of its time has been spent on 300BLK ARs and a couple of bolt rifles. It was used on a Ruger Precision rifles in 6.5 Creedmoor, .308, and .243 Win.. Most of the time it was threaded directly to bolt rifles and 300 BLK ARs. For my .308 Win. and 6.5mm ARs it used the ASR flash hider or muzzle brake attachment. Flat end caps were the norm for me to keep it short, but it was also tested using the longer brake attachment. Traveling to media events or training it was always in the truck and served on more than one occasion in a pinch. If something could be suppressed it was possible to do so with the Omega making it a workhorse.

Keep the Omega short and it’s one of the lightest on the market, rated to .300 Win Mag. Even on 16-inch ARs it remains handy. Mated to a 20-inch or less bolt rifle keeps it short enough to fit in most bags. Add the longer attachments and it can be close, but that brake attachment does make it a bit quieter. Attached to my SBRs it is very handy. At 1.56 inches in diameter, it fit under the handguard of my Seekins Precision 300 BLK SBR nicely. Moving to an ASR flash hider or break adds just a little length, and some weight, and precludes use under a hand guard. My default configuration used the 5/8” x 24 direct thread mount and end cap. Much of my time is spent with a bolt rifle in 6mm, 6.5mm or 7.62mm, making it an easy fit. Add the ASR mount and brake and it is a bit heavier and longer. Not unwieldy by any means, but it makes it close to most other suppressors on the market. Keeping flash hiders that fit 5.56mm and 7.62mm thread patterns meant it fit most anything in a pinch.

Back pressure on the Omega is less than most, although it still remains. Attaching it directly to an AR, even a 5.56mm, meant a visible change in bolt speed and excess gas from the ejection port. Most current designs suffer the same effects, only a couple had less back pressure than the Omega. Any standard baffle design is going to have back pressure, it just comes with the territory, but the Omega has less than most in this length. My Daniel Defense 10.5 inch SBR in 300 BLK was a solid match. Having an adjustable gas block helps so it worked really well on the Seekins 9” SBR. Any consistent use on a .308 based AR (in any caliber) required tuning, generally an adjustable gas block. It would work on some, not on others, all with significant gas in the shooters face. That is true of just about any suppressor available today not mated to a rifle tuned to work suppressed. There are a couple that work better on AR10s, both are an extra $500 and lack the versatility of the Omega.

Sound suppression was right there with most modern suppressors in this length. Posted numbers make it “hearing safe” in just about every configuration. Some configurations get it close to that rather arbitrary 140dB, but most are less. Sound levels are kind of a third rail in the industry with no real standard. It depends on where it is measured in relationship to the suppressor and or the shooter. Atmospheric conditions can effect it, as well as ammunition used, barrel length, and a number of factors. Hearing safe suppressors fired in an enclosed space are still loud—nothing like a brake or flash hider, but “ninja quiet” they are not. Used on 5.56mm with a .308 end cap and its louder than with the 5.56mm cap. The shorter the barrel the louder it is. There are more quiet suppressors, but with common designs that generally means more back pressure. It’s a balancing act, and the Omega does a good job with that.

I often recommend the Omega to those looking to buy one suppressor. With a dozen or more different suppressors at my immediate disposal the Omega remains one of the most user friendly and versatile at hand. Since its introduction other companies have started to build similar designs so the amount of choices is getting better, but the Omega remains a top choice. Solidly built it will last a lifetime, it’s light, and it does not make your rifle unwieldy or unbalanced. Reasonably priced, it is available to most. If you need a suppressor that pretty much does it all—and does it well—the Omega should be looked at very closely. See it at your Class 3 dealer, or for more information contact SilencerCo, Dept. OT; Tel.: (801) 417-5384: Web: www.silencerco.com