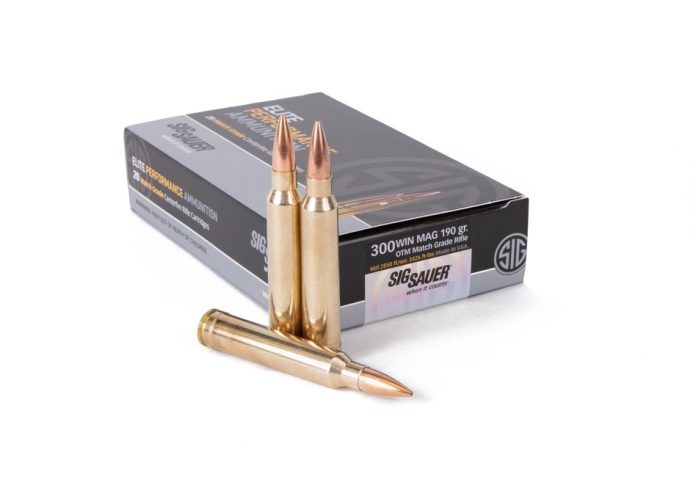 Chalk another win up for Sig.

The firm-fixed-price contract, made public Tuesday, is for the procurement of .300 Winchester Magnum ammunition. While Sig is headquartered in New Hampshire, work locations will be determined with each order and the contract is set to run through September 2024. Sniper ammunition contracts are smaller segments of the overall consumption requirements of the U.S. Military and can be far more easily made separate from the Lake City plant, recently bid to be run by Winchester, and in required quantities.

In a solicitation published by the ACC in July, requests for bids were sought for MK 248 Mod 1 and Mod 0 .300 Win Mag ammo with the latter listed as using a 180-grain bullet loaded to SAAMI specs and subject to a wide range of lot verification tests.

The Army and SOCOM units have fielded precision rifles chambered in .300 Win Mag for over a decade, noting that it allowed for shots at ranges past 1,300 meters. Current platforms chambered for the round include the M2010 ESR, the AICS/Remington Mk.13, and the new Mk 21 Precision Sniper Rifle (MSR).

.300 Win Mag rifles have largely supplanted or augmented earlier 7.62’s in the bolt action roles. Increasing use of accurate semi-auto 7.62, and more recently 6.5 rifles, for the close to mid-range precision roles allowed emphasis on more efficient long range cartridges to enter service. .300 Win Mag is an old and well known performer without changing the characteristics of the base rifles drastically from short action platforms. A Remington 700 action type in 7.62 NATO and .300 Win Mag are, operationally speaking, nearly identical platforms to gear around and support, but the .300 nearly doubles the effective range.