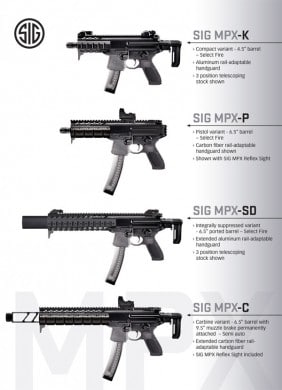 SeaCoastOnline has reported that the lawsuit between the Sig Sauer and the BATFE is now suspended pending the ATF’s reevaluation of the MPX muzzle brake. The suspension is mutually agreed upon by both the ATF and Sig until the ATF concludes a formal third evaluation of the device due August 6th. If the ATF rules against the device again, the lawsuit will resume. Sig Sauer had originally filed suit against the ATF alleging after a ruling that the civilian-legal MPX-C with an extended muzzle brake was considered a “silencer” and thus subject all applicable NFA regulations. Sig disagreed with this assessment claiming:

…it designed the muzzle brake which “effectively reduces recoil and muzzle rise when a shot is discharged” and as such, it’s not subject to regulation under the federal Gun Control Act.

“Accordingly, it will be highly marketable to consumers and will generate profit,” according to the suit.

If classified as a silencer or muffler, “no market would exist for the device,” because consumers would not subject themselves to the “required burdens” associated with silencers, to buy a device that doesn’t perform as a silencer, Sig claims.

The ATF originally asserted that the brake was designed solely to serve as a “monolithic baffle stack” suppressor. The fact that it was welded to the barrel made no difference. The ATF stuck to its original determination after a follow-up letter from September 2013 in which Sig produced evidence that the brake did not suppress sound (in fact, it amplified it) and did reduce recoil to the shooter. My take?  With the recent decision on the “arm brace” Sig is going for broke. Assuming they brake cannot be “easily converted” to a suppressor (which it does bear an uncanny resemblance to a can), Sig will likely win. If it goes to trial, it will be beneficial for the industry to understand what criteria the ATF uses to determine a “silencer”. If they do not have guidelines, this will force the ATF to create them, likely allowing similar devices to the MPX-C.

That said, from a financial aspect, this suit is almost moot. Sig will likely sell significantly more of the arm brace versions than the MPS than the “C”, which will be popular only in restricted locales.