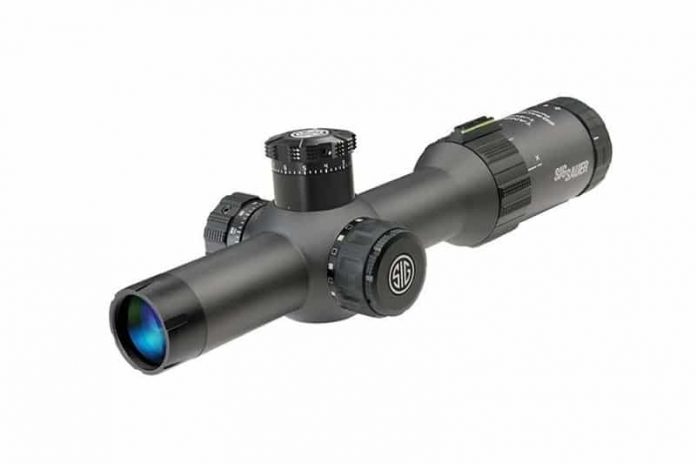 Sig Sauer is well known for their complete lines of pistols and rifles, but what you may not know is that Sig Sauer has an entire optics division that is known as the Sig Sauers Electro-Optics Division. While the world focuses on the Sig Sauer P 320 pistol and its recent accomplishments many people overlook what could be Sig Sauer’s best kept secret, their glass. The company has released an entire line of red dot style and other electro-optics that will be sure to fit almost any budget and need. In the past we have shown you the Sig Sauer Romeo 5 and its full size brother the Romeo 7, today we want to bring you an inside look at the Sig Sauer Tango 4, variable power optic. The Tango 4 is a 1x-4x x 24mm scope that is packed full of features.

The Tango 4 is the smaller brother to the bigger and much more expensive Tango 6, an optic that was featured by Erik Meisner in June of 2016 on his precision rifle build project. Smaller doesn’t mean inferior in anyway, it’s just built for a different purpose than the Tango 6. This optic is built specifically with military style rifle shooters in mind, with an emphasis on competitive 3 gun style shooters. Don’t let that turn you away from this optic by any means, even if you don’t ever intend to shoot competitively this handy scope can still handle your shooting needs. The think tank at Sig Sauers Optics made decided to make this particular 1x-4x optic available in four different reticles to suit the needs of more than one group of shooters. Let take a deeper look into the specifications and attention to detail Sig packed into this optic. Sig really changed the game on this one, offering a few specialty features not found on other optics.

My first thoughts on the Sig Sauer Tango 4 was that Sig has taken aim at the market for mid priced 1x-4x and has really hit a home run on this one. Make no mistake this optic is priced considerably higher than other optics in the market but the Tango 4 is designed to compete with the high end Vortex and Eotech Vudu optics. That being said I was really taken back by the attention to detail that the design team put into this optic. The weight of the optic shocked me a bit, I always expect this lower powered variable optics to be lighter than they are but at nearly 20 ounces it is defiantly stout.

The second thing that jumped out at me is the the controls of the Tango 4. The adjustment turrets and the illumination turret are textured and cut in a way that they are aggressive enough to provide a solid grip even with gloves, but not so aggressive as to cause issues for shooters without gloves. When I adjusted the turrets each time it turned to the left or to the right it was the same sound and crispness. A solid snap and no hint of any of the turrets turning back without an effort. Bumping these turrets and making the point of aim move wasn’t going to happen accidentally. The Sig Sauer Tango 4 was racking up good points on my unofficial tests.

The magnification dial on the rear of the Tango 4 is interesting for several reasons. First the markings on the body of the scope allows a user to easily see what magnification setting the scope was on, including 1/2 power settings between each full magnification. This is a nice added feature that gives shooters more flexibility and knowledge of their exact settings. The large knurled dial on the eye piece, much like the adjustment turrets gives the shooter plenty of textured surface to grasp while making adjustments. The engineers at Sig also added a pair of small tritium rods on the dial so a shooter can check their settings under low light conditions. It’s a small feature that shows the engineers and design team are listening to their customers.

In what some people may find trivial, but Sig Sauer found important enough to offer, is that the Tango 4 is available with custom engraved turrets. What that means is that if you always shoot a particular projectile type and powder combination and zero your gun for it you can have some of that information engraved on your adjustment turrets. It’s a nice feature that I can’t think of anyone else offering, I might be wrong but off the top of my head I can’t think of another manufacturer that offers that level of customer service.

When you take a step back and look at the detail of the Sig Sauer Tango 4 its easy to see that the engineering and design team really put a ton of thought into this. The four available reticle choices combined with the lifetime warranty and the technology packed into this little optic is really pretty staggering. The Sig MOTAC system all by itself is a great idea, the system automatically powers down the Tango 4 and then when it senses movement it re-powers the optic back to the setting it was last on. This anti run down feature greatly extends the battery life. Even with all of the technology and innovations in the Tango 4, Sig Sauers was able to blend great looks with rugged dependability and a price point that doesn’t totally destroy your wallet.

The short term plan for the Sig Sauer Tango 4 is to mount it onto one of my 16″ barreled test bed AR-15’s and run a few hundred rounds through it in the very near future. This optic is only on loan to us here at the site for 120 days so there will be no heavy destructive style testing or chest freezer testing since it has to go back at the end of the cycle. I will however be testing this out to ranges of 300 yards and seeing how it performs. The target that will be used in these trials is the Defense Targets RST Steel Target, which is a 3/8″ think AR500 target rated to handle much heavier rounds than the 55 7 62 grain 5.56mm loads we will be shooting at it.

If you are in the market for either a 1-4X or a 1-6X optic then I have to tell you it truly is a buyers market out there lately. Many new lower powered 3 gun style optics have hit the market in the last twelve months and from what we are seeing here the competition for your dollars is heating up. The combination of the saturation of the military sporting rifle market and the large amount of affordable variable optics on the market has made it a perfect time to try 3 gun competitions. If you stop to think that you can get a basic AR-15 and 1-4 X optic for $1100 that’s the type of deal we haven’t seen in the firearms world in a very long time.

What do you think of the Sig Sauers Tango 4 ? How do you think it stacks up against the other optics that we have featured here on the site lately like the Eotech Vudu or the Primary Arms Generation III ? We are very interesting to see, especially since we have the Primary Arms Generation III 1 X-4 X sitting on the work bench next to the Tango 4. If things work out right we might be able to put the Sig Sauer Tango 4 up against at least two other highly anticipated 1 x- 4x optics, That plan is still being worked on though. If you are a 3 gun competitor we are interested in hearing from you on your thoughts about the size and weight of the Sig Sauer Tango 4.