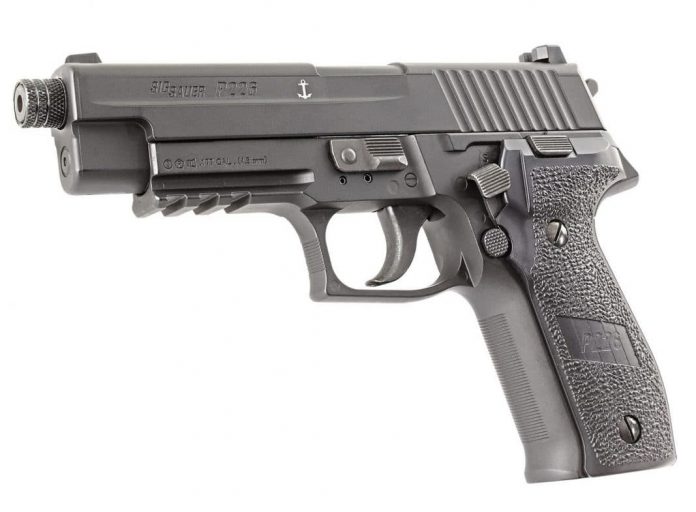 What would you give for a CO2 powered, semi-automatic, .177 Cal. pellet pistol that looked just like, weighed about the same as, had all the same controls—including the trigger system—and fit in the same holster as your center-fire P226? How about $110.99?

If your center-fire P226 happens to be a MK25 Navy—the same pistol that’s been in use the by U. S. Navy SEALS since 1984—you’ll slap down out that credit card so fast it’ll make the gun counter guy’s head spin. That’s because the P226 MK25 pellet gun has the SEAL anchor etched in white on the left-hand side of the slide just like the real thing. (Sorry, no UID identification label).

The P226 MK25 pellet pistol is powered by standard 12-gram CO2 cartridges and fires standard .177 Cal. lead pellets, both available at any firearms or sporting goods store. With an all-metal blowback slide, metal frame and rifled steel barrel, it weighs in at 39.4 oz. empty with a magazine and CO2 cartridge installed, which is actually 5 oz. more than an empty center-fire P226 MK 25.

Visually, the pistol is almost indistinguishable from a real P226 Navy. The most obvious difference is that the pellet pistol has a threaded muzzle with screw-off thread protector. Why? Don’t ask us. We just report the facts. Closer inspection reveals that the barrel hood is simply a recess machined into the top and right side of the slide. Actually handling it will divulge that the slide stop and take-down levers are inoperative, and are just there for an authentic appearance. The decocker does, in fact, safely decock the hammer, but instead of rebounding after being depressed it stays down and serves as a manual safety. The DA/SA trigger system operates identically to that of the real thing, but the double-action pull weight is somewhat lighter (7 lbs. 3 oz.) than that of the genuine article (about 10 lbs.). The single-action pull weight (4 lbs. 0 oz.), however, is pretty close to the advertised single-action pull weight of the center-fire P226 (4 lbs. 4 oz.).

The authentic looking mag release drops a double-ended polymer magazine with an 8-round rotary drum at each end. When your first eight shots are done, just drop the mag, reverse it and you’re good to go for eight more. SIG reports a muzzle velocity of 510 f.p.s.

The back strap has a locking latch at the top, and when pushed down the back strap swings downward from the top to reveal the CO2 cartridge compartment. You’ll get about 64 shots per CO2 cartridge—two full magazines worth—and the cartridges are quick and simple to replace. Other features include fixed 3-dot sights, an integral 3-slot equipment rail under the dust cover, rear slide serrations, front strap checkering and genuine looking black polymer grip panels. Available in black or flat dark earth, it comes with two magazines.