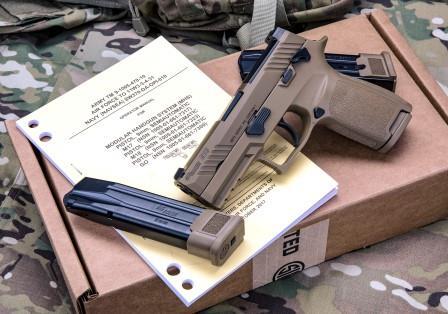 Historically, Lot Acceptance Testing would test handguns to 5,000 rounds and allow for up to 12 stoppages to pass.  The recent MHS Material Reliability Test consisted of firing three M18 pistols to an unprecedented 12,000 rounds each, and in an extraordinary display of reliability, the M18 performed with zero stoppages.

Additionally, despite undergoing this level of strenuous testing the M18 passed a parts interchange test, met all of the stringent accuracy and dispersion requirements, was tested for firing pin indent and trigger pull measurements to ensure consistency, and conformed to all workmanship standards.

The success of the MHS program, and the performance of both the M17 and M18 pistols, was further confirmed in the recently published Director of Operation Testing and Evaluation (DOT&E) Annual Report, which provides an independent review and analysis of the U.S. Department of Defense weapons systems.

The report states that, “the MHS meets or exceeds requirements for accuracy, lethality, ergonomics, and safety,” in addition to stating that, “both the XM17 and the XM18 are operationally effective and suitable.”

Ron Cohen, President & CEO of SIG SAUER, Inc., began, “the results of this testing for the M18 pistol is truly impressive.  The M18 withstood the harsh testing and performance requirements set forth in the MHS contract and has set a new standard for reliability in service pistols.”

After one of the most rigorous and highly competitive selection processes in the history of military firearms, SIG SAUER was awarded the Modular Handgun System (MHS) contract for the full-size M17 and the compact M18 with the P320-based pistol platform.  Both the M17 and M18 pistols are being adopted by the Army, Air Force, Navy, Marine Corps, and Coast Guard.  The MHS contract was awarded to SIG SAUER in January 2017 for delivery of 480,000 pistols over a period of ten years; to date SIG SAUER has delivered over 20,000 pistols

“For this testing the U.S. Army set very high standards for quality and performance, and at SIG we relish the opportunity to meet a challenge and exceed expectations.  The performance of the M18 not only surpassed the U.S. Army’s testing requirements, its performance was simply outstanding and nothing short of perfection,” concluded Cohen.

SIG SAUER, Inc. is a leading provider and manufacturer of firearms, electro-optics, ammunition, airguns, suppressors, and training.  For over 100 years SIG SAUER, Inc. has evolved, and thrived, by blending American ingenuity, German engineering, and Swiss precision.   Today, SIG SAUER is synonymous with industry-leading quality and innovation which has made it the brand of choice amongst the U.S. Military, the global defense community, law enforcement, competitive shooters, hunters, and responsible citizens.  Additionally, SIG SAUER is the premier provider of elite firearms instruction and tactical training at the SIG SAUER Academy – a world class, state-of-the-art, 140-acre training facility.  SIG SAUER is headquartered in Newington, New Hampshire, and has more than 1,700 employees across eight locations, and is the largest member of a worldwide business group that includes SIG SAUER GmbH & Co. KG in Germany.  For more information about the company and product line visit: sigsauer.com.