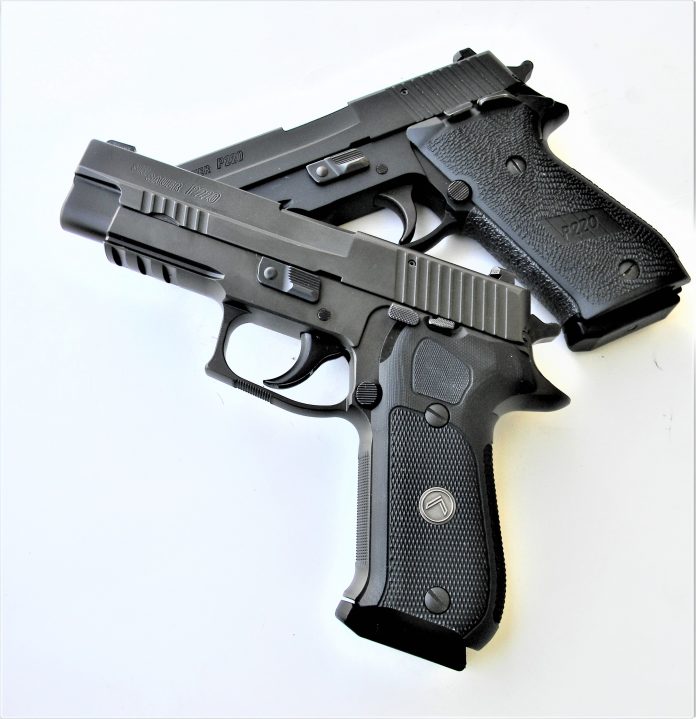 When I was a young man, Germany took the unprecedented path of conducting extensive police trails to choose a modern police sidearm. The new tactical doctrine demanded that the handgun be simple to use and be no manual safety, but good safety features.

The double action first shot SIG P220 was a clear winner. The SIG also met stringent accuracy requirements. The double action first shot SIG has set a standard for reliability and accuracy ever since. The first P220 was a 9mm handgun. Later .38 Super and .45 ACP versions were added. The P220 spawned off other excellent handguns including the P226, P227, P228, and P229.

The double action first shot pistol remains popular with those that value handling and simplicity. The SIG represents the high water mark in double action first shot pistols, also known as DA/SA or TDA. The P220 is a first class .45 ACP pistol with a great deal of history behind it. This is a proven pistol that offers superlative reliability and surprising accuracy. I prefer the .45 ACP cartridge based on modest pressure, a full powder burn, and excellent wound ballistics. The P220 is my favorite SIG and the Legion my favorite P220.

The Legion series offers several important improvements over the standard SIG pistol. These include the Legion Gray PVD finish, a durable and attractive final coating. An extended grip tang, SIG calls an Elite Beavertail, makes for better recoil control. Additionally, the frame is relieved under the trigger guard to lower the bore axis, the grips are nicely checkered G10, and there is custom grade 25 line per inch grip strap checkering. The trigger guard is also checkered.  The SRT is an improvement that should be standard on all SIG pistols. This short reset trigger makes for a sharper reset and excellent all around control. The SIG trigger breaks 11 pounds in double action. Single action trigger compression is 4 ¼ pounds.

The pistol is provided with three eight round magazines, a nice touch in a day when many pistols are delivered with a single magazine.

The pistol features the standard SIG frame mounted decocker. This lever is much easier to use quickly and intuitively than a slide mounted decocker.  It is common for shooters to ride the thumb on the slide stop during firing resulting in the pistol failing to lock open on the last shot. The SIG Legion features a redesigned slide lock to mitigate that tendency. SIG X-Ray sights are a combination of a serrated rear sight and a bright green roundel in the front sight with a tritium front dot. These are ideal for all around defense use.

Many shooters prefer the safety features and handling of a double action first shot pistol over either the single action 1911 or the striker fired Glock/P320. The pistol may be kept at home ready safely- even under the pillow, a common night time ready mod in my neck of the woods. The SIG P220 is arguably the smoothest of double action pistols and among a very few .45 caliber DA first shot pistols available. I have no reservations concerning the SIG P220 Legion. The P220 has always seemed the best SIG pistol and the P220 Legion the finest P220 yet manufactured.

For this review I loaded the magazines with Winchester 230 grain ball ammunition. The pistol was fired at combat ranges of 5, 7, and 10 yards. Firing double action demands attention to detail. Get on target and make a smooth straight to the rear press. The pistol turned in excellent combat groups. The cadence of fire isn’t set by how quickly you are able to press the trigger but by how quickly you are able to return the sights to the target and control recoil. The pistol is a first class performer in all regards. I also fired a few groups off the benchrest for accuracy testing at 15 yards. I fired three shot groups in respect for the current ammunition shortage.

Here are the results

The P220 is clearly accurate enough for any chore.  I ordered the Protective Services Epitome holster from Advancedperformanceshooting.com as a daily carry holster for the P220. This isn’t the lightest pistol and some thought went into the choice. The Epitome isn’t an inside the waistband holster, but is designed to be worn outside the pants and behind the belt. The result is a holster that is concealable under a relatively light covering garment but which offers a sharp draw and good retention. The 15 degree cant makes for a clean draw and the handgun is naturally drawn into the target. This combination makes for an excellent all around daily carry piece when a covering garment is worn. 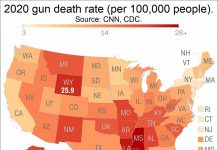 A Tale Of Three States: California’s Gun Laws Aren’t The Cause Of Its Low Gun Homicide Rate