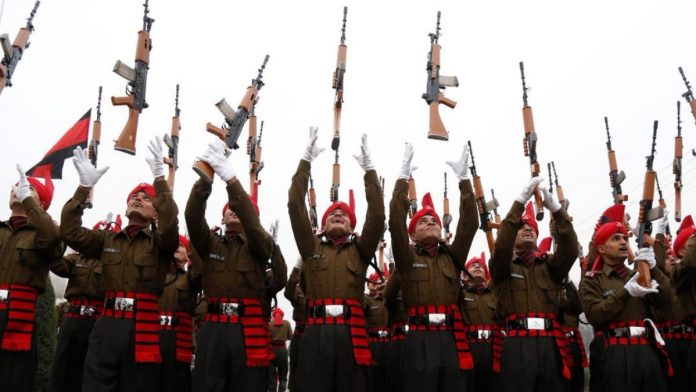 India has been attempting to replace their INSAS rifles for a decade, and Sig Sauer will provide over 70,000 new ones to help jump-start that effort (Photo: Basit Zargar via Indian Ministry of Defense)

A deal 10 years in the making to supply the Indian Army with new rifles has been closed by Sig Sauer who will make the guns in the U.S. for export.

With 1.2 million active soldiers, India has the second largest standing army in the world and has been using the domestically-made INSAS 5.56mm rifle — augmented by AK47s — as standard since the 1980s. For the past decade, Delhi has been trying to upgrade their small arms without much luck but this week made it official that Sig would supply at least 72,400 new guns for starters.

“Ten years wait ends,” said the Indian Ministry of Defense on Tuesday about the fast-tracked contract, promising that the complete order would “be delivered in a year from today.”

The guns, 7.62x51mm SIG716 rifles, are an enhanced AR platform featuring a 16-inch barrel, M-LOK handguards, and a six-position telescoping stock. The company confirmed on Wednesday they will be American-made in their New Hampshire factories.

“This is the first large firearms procurement of the Indian Government in decades, and the explicit mission for this tender was to modernize the infantry troopers of the Indian Army with the best rifle available,” said Ron Cohen, Sig’s president and CEO.

Cohen said the 716 competed in an open tender against manufacturers from around the globe and “underwent a comprehensive and exhaustive testing and evaluation process where it outperformed the competition, and was ultimately chosen, and met all the criteria, as the best rifle to modernize the Indian Army.”

AK factory to spin up in joint Indio-Russian deal

In addition to the Sigs, Indian officials are expected on Friday to finalize a contract with Russia’s Kalashnikov Concern to produce upwards of 750,000 AK-203 rifles in 7.62x39mm caliber at the state-owned Ordnance Factory Board facility in Korwa as part of the mandated “Make in India” program. Established in 1802, OFB produced the INSAS as well as domestic variants of the FN FAL and Lee-Enfield rifles for the military. The AK deal will see OFB with a 50.5 percent share in the joint venture while Kalashnikov will have a minority 49.5 share. Headed by a serving major general in the Indian Army, the OFB-AK plant will eventually aim to export the AK-203 internationally.