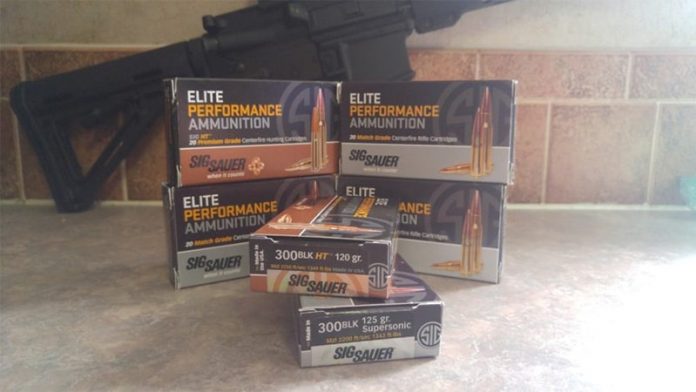 SIG’s becoming a behemoth in the firearms industry. Less than 5 years ago SIG was mainly known for their P series of pistols. In 2017 they are known for their pistols, their suppressors, optics, rifles, optics, and of course ammunition. SIG Sauer seems to be aiming to become a one stop shop in the firearms industry. I’d bet 5 bucks we’ll see Sig brand polymer AR magazines in the next year. Right now we are looking at two the SIG 300 Blackout rounds. These are pretty new to the market and address the need for premium ammunition for the 300 Blackout. 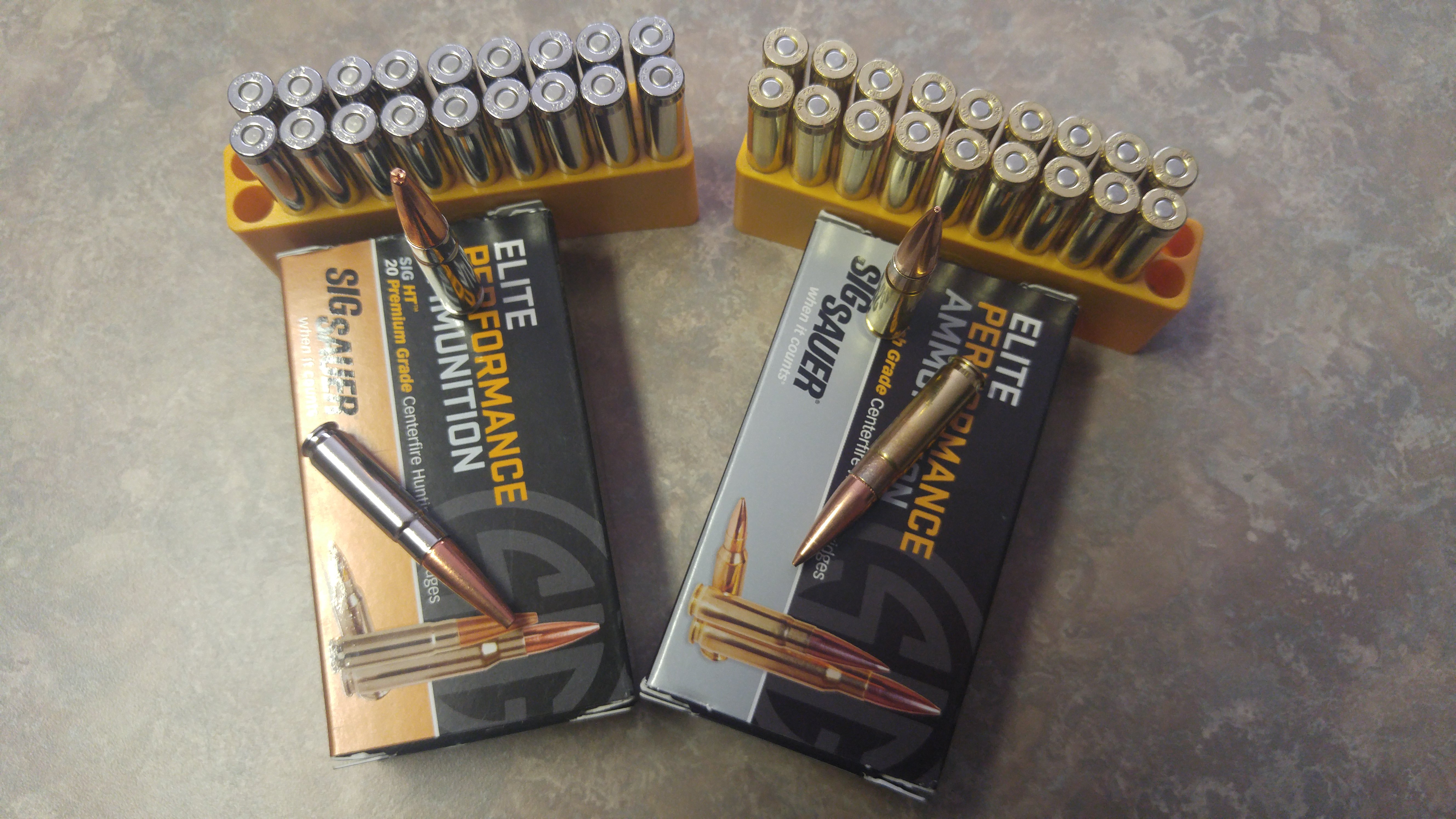 The 300 Blackout is a round I hunt with. I live in Florida and find the 300 Blackout to be a perfect round for hunting here. Northwest Florida is a combination jungle and swamp. Shots are limited to a hundred or hundred and fifty yards at most. While whitetail deer is my preferred game we do have a feral hog issue in Florida. 300 Blackout is pretty much perfect for whitetail and capable of taking hogs easily. In an AR platform, I also have the option of fast follow up shots. 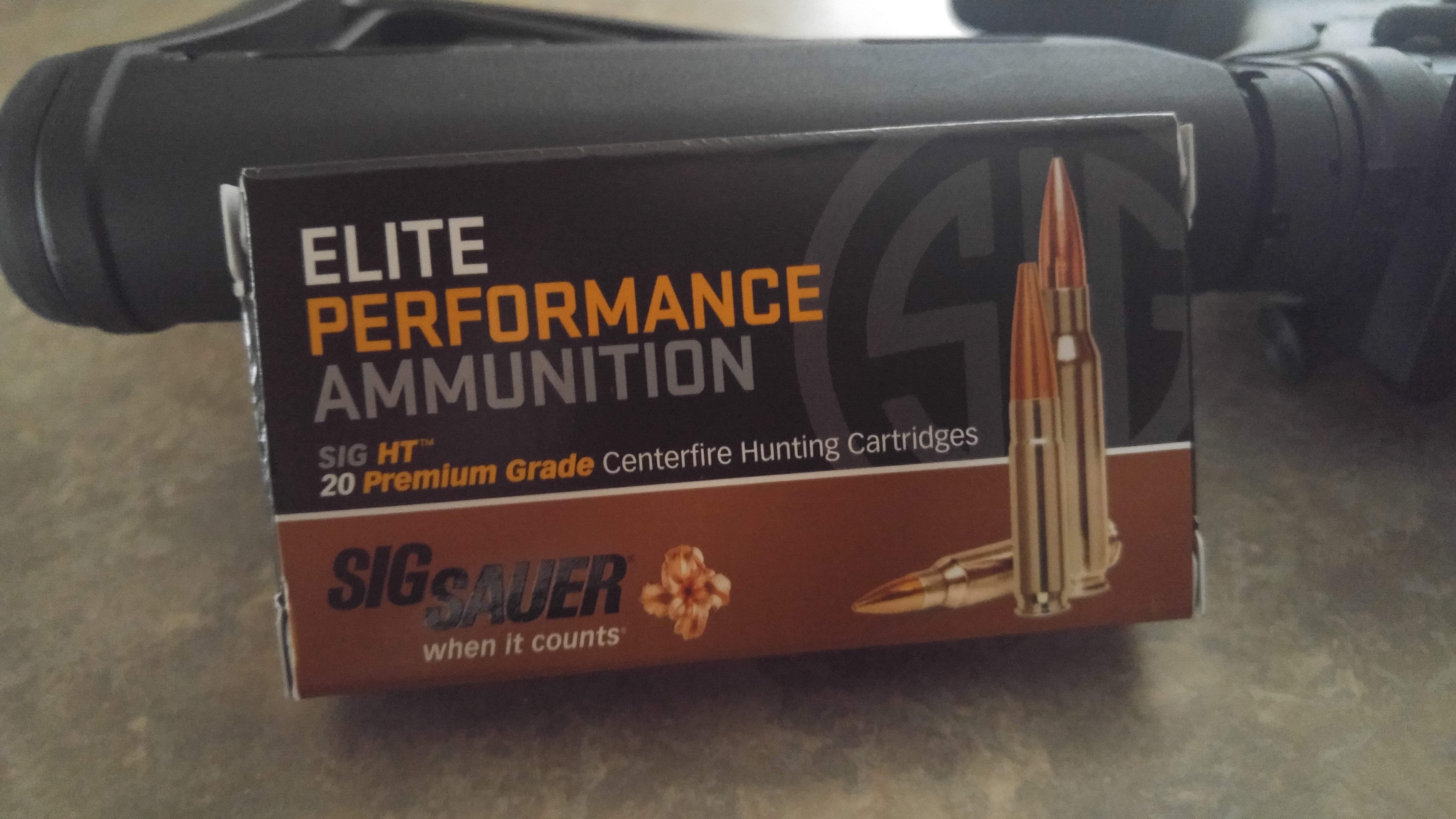 SIG 300 Blackout HT is a round made entirely from copper. This is perfect for those folks that live in states than ban lead ammunition for hunting. This is a supersonic 120-grain projectile that reaches a little over 2200 feet per second and hits with 1349 foot-pounds of force. The projectile is designed for feeding in AR 15 rifles with optimized nose geometry. The HT projectiles are proven to reliably expand 1.8X their normal size while retaining almost all of their weight.

The shells are coated with nickel which isn’t just to make shiny and pretty rounds. The nickel resists corrosion and keeps the ammo live and safe for a long period of time.

If you need to stress accuracy from your rifle, and I mean minimal variance between rounds then SIG has you covered. This Match Grade 300 Blackout load by SIG is a Supersonic 2200 feet per second load. The bullet is a 125 grains and is a Sierra MatchKing projectile. SIG also produces a subsonic, match grade 300 Blackout round. Sierra Matchkings are proven to be some of the most consistent projectiles on the market. The Matchking projectiles are used because they retain accuracy when suppressed. SIG 300 Blackout ammunition is designed with suppressor use in mind, which is a good idea because one of the biggest reason to run 300 Blackout is to suppress it. The Subsonic 220 grain 300 Blackout load is going to a lot quieter, but you’ll have a little more range with this supersonic load.

I’ll also be shooting cheaper American Eagle brand 150-grain ammunition to see if there is a difference between SIG’s premium 300 Blackout and cheaper, plinker ammo.

Why the Ten Round Mag?

That’s actually a five round mag, its ten round length but pinned to five rounds. I have a few reasons for this, first, when I hunt I have to use a 5 round magazine by law. Second I was shooting in the prone position and a shorter mag is just easier to handle.

The Match grade ammunition performed exactly how I expected it to. It was clean and very precise. I was shooting with Troy sights with XS night sight insert. I must have had some supernatural force guide these rounds because it’s the best 100-yard group I’ve ever fired with iron sights. Of the 100 rounds, this group was certainly above average. If you’ve ever just had one of those moments where everything clicks into place when shooting, this was one of these moments.

When it came to the hunting ammunition I was also suitably impressed. The final group wasn’t as tight as the match grade ammo but it was perfectly suitable. I’m not that great of a shot, and I’m far from a pro. However, if I was hunting any of these shots would’ve done the job.

The American eagle ammunition was a little outclassed. Federal makes some awesome premium ammo, but the American Eagle is made for plinking and training and is about half the cost of match grade and hunting SIG 300 Blackout ammo. It was pretty good honestly, it wasn’t as precise, but who could expect it to be? It does illustrate the difference between Premium ammo, and standard plinking ammo.

Both brands of SIG 300 Blackout ammunition performed admirably. If you need to put several bullets in a small group these will work. I’ve been suitably impressed by SIG 300 Blackout, 9mm FMJ, 9mm JHP, and 223 ammunition. SIG Sauer is killing it lately. Check out SIG Sauer and their ammunition here.