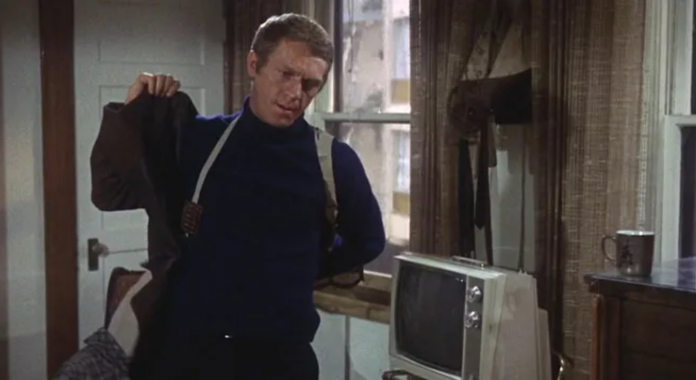 You can’t point to a single cop show or action movie where the shoulder holster isn’t prominently displayed.

Despite it being an iconic “plain clothes” carry method, it’s been oft relegated to the preference of “fudds” in recent years. Why is that?

With the glut of appendix/inside the waistband options these days, it’s understandable that older carry methods would fall by the wayside, but is the shoulder holster obsolete, or just misunderstood?

[FYI: Appendix is no spring chicken of a carry method either.]

I’m inclined to say the latter, and here’s why.

I’ve been fortunate enough to fall under the tutelage of Darryl Bolke in the last couple of years, and he has seen fit to share with me not only some of his own personal experiences but conversations that he’s had with other industry experts as well.

So what was the death knell for shoulder holsters? In a word: square range training.

For institutional training (law enforcement), it’s far more challenging for a Rangemaster to operate a safe course of fire with a line of shoulder holsters than it is working off of duty belts. For competition, it’s virtually impossible for someone not to violate the 180 rule without some very intentional body positioning on the draw and holstering.

So they didn’t so much fall out of favor as they were forced out of favor, due to the existing administrative rule sets.

So was this an example of natural selection, or is the shoulder rig still viable?

From a purely concealment standpoint I do feel that there are better options that will allow you to hide a comparably sized gun without the wardrobe limitation. Hollywood has given us a false idea of just how easy it is to effectively conceal with a shoulder holster, mostly because it’s not actually in use unless it’s on display for the scene.

With that being said, if you look at the shoulder rig less as a concealment solution, and more as a “gentleman’s LBE*” as Jack Clemons called it, it suddenly becomes a bit more appealing.

Shoulder holsters make larger guns easier to live with, donning and doffing is simple, and the shoulder holster will always keep the gun in the same spot regardless of what you’re wearing (obviously keeping it hidden requires some wardrobe considerations).

If you look at where shoulder holsters were most commonplace, it was with investigators and bodyguards. Both roles have you seated for extended periods of time. Instances like that certainly benefit from bringing gear up off the beltline to make it more accessible (look at the GWOT trend of mounted combat arms troops attaching holsters to their body armor).

While I doubt I’d ever recommend one to someone as their first holster, I do still think there are circumstance where a shoulder holster could be an appropriate choice.