Smart gun technology is generally met with some resistance by firearm enthusiasts. There are a few reasons for this: smart technology is generally intrusive when it comes to personal data and privacy, and potentially opens doors for hacking or other nefarious activity. Some also see smartguns as a violation of the Second Amendment. Regardless, this hasn’t stopped some companies from breaking into the emerging industry.

ShotView, developed by TrackingPoint Labs, is a new project by the creators of the precision-guided firearm. It’s an app intended to be used with Google Glass that enables a shooter to better scope out an environment. In a video recently released, a man wears Glass and uses the device to aim and fire around corners.

“Science fiction comes closer to reality,” the video narration states. Check out the video to see how it works.

ShotView essentially serves as a head’s up display and allows the user to view data like direction, shot angle, rifle cant, and zoom settings.

“When paired with wearable technology, PGFs [precision-guided firearms] can provide unprecedented benefits to shooters, such as the ability to shoot around corners, from behind low walls, and from other positions that provide exceptional cover,” the company said.

TrackingPoint Solutions is an Austin, Texas-based technology startup. Learn more about ShotView and their other products on their website. The ShotView app is available through the Google and Apple apps stores for those interested in trying out the interface. Their other app, also called TrackingPoint, is used in conjunction with their PGFs. 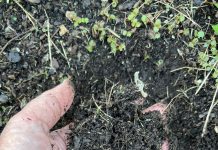