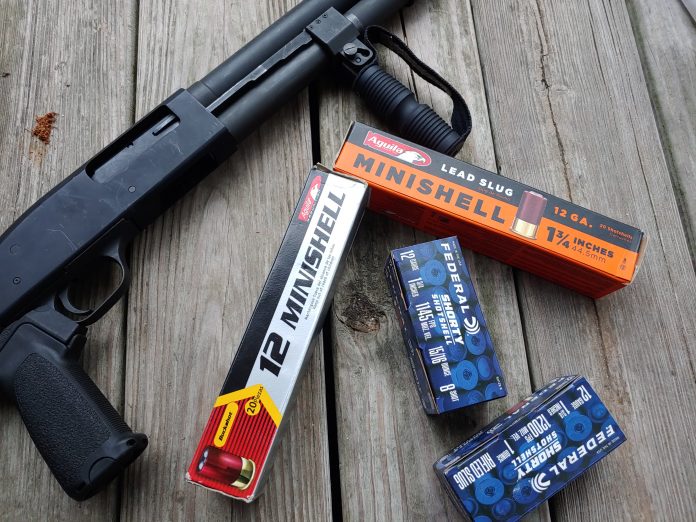 In 2017 I saw the first Mossberg Shockwave at SHOT show. I got some time behind the gun and fell in love. It’s a fun gun. However, more importantly at SHOT they were loading it full of mini shells. This combined with the Opsol Mini Clip gave us a 12 gauge shotgun with a 14-inch barrel that could hold 9 rounds and cycle perfectly. These mini shells were fascinating to me and since then I’ve purchased and played with buckshot, slugs, and birdshot in the mini shell variety.

The two main producers of mini shells are Aguila and Federal. Federal entered the mini shell game earlier this year and was polite enough to send me both the bird shot and slug varieties of ammunition. Unfortunately, the buckshot wasn’t ready just yet. I also have some Aguila slugs and buckshot

I’ve shot a lot of this ammo and I feel I can give you an accurate assessment of mini shells.

You can go ahead assume semi-autos are off the table, as are any mag-fed shotguns. However, what about pump shotguns? Will they work? Well…. Sometimes.

Any pump gun can run mini shells, however, they may not run reliably. Reportedly they work perfectly in the Kel-Tec KSG, and with the Opsol Mini Clip they run 100% in Mossberg 500 series shotguns. However, in most guns, they tend to hang up. They can flip, and slide, and make it impossible to cycle reliably. The Opsol works with the Mossberg because of the skeletonized shell lifter.

I’ve had them run in Winchesters and Remington, but you have to run the pump very hard and very fast. Even then it’s still spotty as to whether they will work or not.

Single and double barrel shotguns eat these things up with zero issues. At the end of the day a Mossberg 500 series with the Opsol Mini Clip, or a break barrel gun are what I’d suggest. The Mossberg Shockwave can be a challenge to shoot, but with these shells, it’s light recoiling, and easy to control.

I have to say no when it comes to any kind of home defense or duty use. Yes, in a pump gun with a magazine tube it will increase your capacity a lot. However, you are giving up the main feature of a shotgun, that devastating single shot power.

Of course these are still lethal, don’t mistake. The slugs are hitting as hard as a 44 magnum. That’s a lot of force for sure, but a regular 2 3/4″ shotgun shell is going to hit even harder. Plus, in a home defense scenario buckshot is often preferred. The spread of shot as it strikes the body making multiple wound channels simultaneously, a regular shell has more shot at a faster velocity.

Plus, the reliability aspect is always present. Federal advertises these are sporting rounds for the range, not as defensive loads.

Here is a serious task these shells can excel at. Shotgun ammo is big and heavy, but shotguns are incredibly common and very versatile. This ammo will allow you to carry more shotgun ammo. At close ranges, these are great hunting rounds. Especially when we look at the slugs.

In a pinch, these could be a self-defense choice if your main rifle is down.

Here is another excellent task for these shells. If you only own a 12 gauge shotgun and want to teach new shooters mini shells are excellent. These shells will allow you to teach new shooters the basics of a shotgun without the fearsome recoil. They can learn how to load, shoot, and use shotguns without nearly the risk of injury or scaring themselves.

Here is where these shells really shine. When paired with a Mossberg Shockwave these shells are an absolute blast. They make it easy to handle, and fun to shoot without the control challenge standard shells have.

Ringing steel at 50 yards with the slug mini shells is pretty damn fun. It gives you a real sense of pride and accomplishment. If you have the ability to I also suggest trying to hit some clays with the mini shell birdshot.

Ultimately Mini shells are like any other shotgun load out there. They have their place and are a tool to put in the box. The shotgun is a versatile weapon and these provide one more option for shotgunners. Be it for prepping, for fun, or for small game hunting.