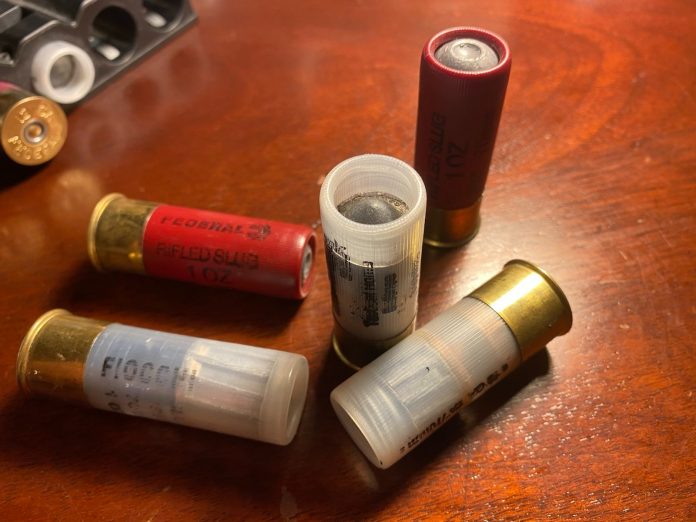 Cover Photo: A selection of slugs, including Brenneke Home Defense slugs, Federal Foster slugs, and a pair of Fiocchi Extrema Aero-Slugs, which resemble Brenneke slugs more than they do Foster slugs.

Besides buckshot or birdshot, shotgun slugs are another common type of shotgun ammunition and are typically used for hunting or protection from dangerous animals. Due to their penetration and accuracy potential, slugs also have a role in tactical and self defense shotgun use.

Unlike birdshot or buckshot with their payloads of several smaller pellets, a shotgun slug consists of a single and heavier projectile in front of a wad. The wads may separate in flight or be attached to the slug itself (as in the case of Brenneke slugs). Slugs can increase the shotgun’s effective range and provide a degree of precision that no shot pattern is capable of. Generally speaking, most slugs extend the shotgun’s effective distance to approximately 150-200 yards (also depending on the sights). Due to their shape, slugs can offer deeper penetration when compared to buckshot as well.

At the aggregate level, shotgun slugs are nothing more than plastic encased Minié balls that happen to be fired out of modern muskets.

The two main types of slugs that are relevant to defensive or tactical shotgun applications are the Brenneke and Foster slugs, respectively.

The Brenneke slug dates back to the late 1890s and was designed by the German ammunition engineer, Wilhelm Brenneke. These slugs are fully solid and have a permanently attached wad that also acts as a gas check (seal) when the slug is traveling down the bore. Brenneke slugs also have several “ribs” along their outer circumference, and these serve two purposes. First, they reduce bearing friction as the slug moves down the bore and they act as malleable buffers in case a slug passes through a constricting choke. Having a deformity on the slug as opposed to these outer ribs would result in very poor ballistic performance. Brenneke slugs are known for their deep penetration ability, as they are solid projectiles with a very sharp “cutting” shoulder, not unlike an enormous version of a .38 Special lead wadcutter bullet.

The Foster slug dates back to the early 1930s and was invented by Karl Foster whose aim was to create a versatile projectile that could be fired through any choked smoothbore shotgun in order for Great Depression era families to easily harvest big game with the “bird guns” they already owned. Like the older Brenneke design, Foster slugs have external ribs on their outer surfaces for much the same reasons: to reduce drag and protect the slug itself from constricting chokes. Foster slugs are frequently described as rifled slugs because of these ribs. Despite the name, these ribs do not impart any spin on Foster slugs and therefore do not have a true “rifling” effect. Foster slugs mostly resemble a round thimble as they have hollow bases. The intention is that focusing most of their weight forward will help them fly straighter, much like a shuttlecock. While perhaps the Brennke slug profile will beat a Foster slug on penetration, the capability of the Foster is nothing to sneeze at either. Federal Ammunition loads a Foster slug for both hunting and defensive use known as the Tru-Ball slug. These have a plastic ball wedged behind the hollow cavity of the slug in order to help them keep their shape while cutting through a target. The hollow ball is still light enough to not disturb the slug’s balance during flight.

Another type of slug found on the market is the saboted slug. These require shotguns with specialized barrels that are actually rifled and are only typically used for hunting applications. They fall out of the general purview of tactical or defensive shotgun use as these typically involve smoothbore shotguns only. However, the performance and accuracy that someone can get from a shotgun with a rifled barrel and sabot slugs is nothing short of amazing.

In general, most slugs found on the market weigh around one ounce and are pushed with a muzzle velocity ranging from 1300 feet per second through 1600 feet per second. They are usually made from lead, but solid copper slugs for maximum penetration are also available for maximum penetration or dealing with dangerous animals. Most modern slugs are typically loaded in 2 ¾ inch roll-crimped shells and the nose of the slug is left exposed. It is very easy to visually determine whether a shell is loaded with shot or a slug by checking for this exposed lead and seeing that there is no star crimp. Red dot sights mounted on shotguns are perhaps best suited for slug shooting, if nothing else. Slugs excel in tactical or defensive use when scenarios involving working around barriers and extended types of cover, such as automotive glass and vehicles themselves. Performing maneuvers like quick slug changeovers can give a shotgun user a leg up in accuracy and precision at the last minute, if such as shot is called for.

Regardless of whether it is a Foster, Brenneke, or even a saboted-slug, shotgun slugs are extremely powerful ammunition options and another great choice to keep in the “shotgun toolbox.” Just like they did when they were first coming out, shotgun slugs still allow modern shooters to get more use and versatility from their shotguns today. Nowadays it is not uncommon to find a slug or three on the side-saddle of any switched-on defensive shotgun user or police officer either.

A Note on Slug Penetration: At the recent Thunderstick Summit, a premier shotgun focused training even held during a September 2022 weekend in north Texas, I watched video footage of shotgun slugs penetrate car windshields and fly through the entire interior of the car and embed themselves past the back seats almost into the trunk area. Slugs had no problem penetrating through door windows or car doors either.

To close this short article, dear reader, I leave with parting gift of a video clip I found on Instagram showcasing the power of the shotgun slug.