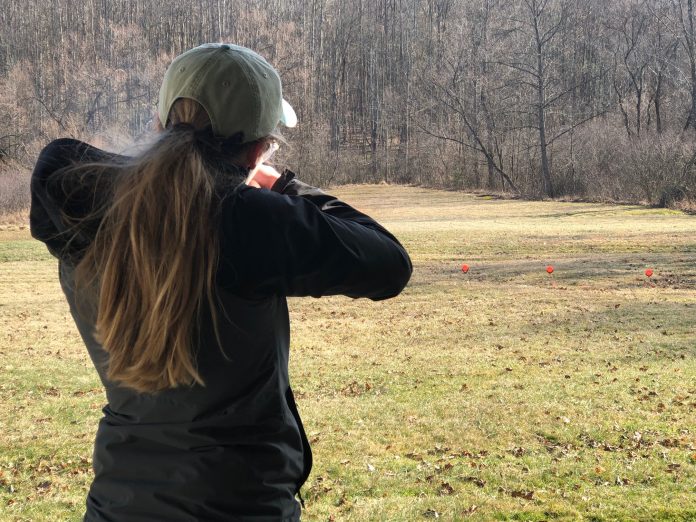 When it comes to firearms, usually I am in the position of learner not teacher, but I had my very own adventure in mentorship last weekend. I took my adult daughter to the shotgun field for a +ONE day.

For those who haven’t heard of it, the +ONE Movement is a mentorship initiative launched by the National Shooting Sports Foundation. This goes hand-in-glove with the websites letsgoshooting.org and letsgohunting.org, and is aimed at increasing the ranks of shooters and hunters by having experienced folks bring another person (plus one) into the ranks.

Both of my daughters learned 9mm handgun several years ago under the tutelage of Babes With Bullets Camp, but neither one had ever handled or shot a shotgun before. (I’ve only been doing it myself for 3 or 4 years). This daughter (the forestry major) had expressed an interest in starting to learn hunting with me, so we ventured out together on a recent Saturday afternoon.

I brought four of my shotguns to the range for her to try.

After refreshing her on the Four Rules of Gun Safety and how they applied to shotguns versus pistols, I introduced her to each style of shotgun in turn. We started with my over and under Benelli, then progressed to the pump guns, up to the semiauto.

This girl (she may be 27, but she will always be my little girl) was all about the shuck-shuck. You should have seen the grin when she racked that first pump gun!

As we worked our way through my guns, she “liked” my Benelli 828U, and she appreciated the heritage of her grandfather’s gun, but racking that Mossberg became her new mission.

The way she explained the pump preference to me was that unlike the OU or the semiauto, when she racked a new shell with the pump she KNEW she was ready to go. She also liked that on the 500 the safety was on the tang for thumb operation. It seemed more natural to her.

The youth stock Mossberg fit her comfortably, and that’s the gun she stuck with the rest of the time we were on the range. It was a cold Saturday with temps in the 30’s, so we had the shotgun field all to ourselves for two whole hours. She just kept asking for more shells and we kept setting up more clays on stands.

I was actually thankful for our solitude. I didn’t want her to feel any pressure at all from well-meaning strangers. We took our time, she got to try a new skill at her own pace, and we didn’t have an “audience”. Because we were alone I also let her shoot from a seated position as if she were at the base of a tree, hunting squirrels.

The girl shot almost 75 shells on her first time out before her arms started getting tired. I was so proud of her! I checked in with her by text the next day and she said she wasn’t even too sore. That’s my girl …

Next time maybe we’ll work on some flying clays, but I need to get her to an actual shotgun instructor now too. I don’t want to let too many of my own bad habits get ingrained in her and I don’t know how to “fix” things like little aiming issues with shotguns.

I’ll leave the rest to the professionals, but it was an auspicious beginning that I hope will be the start of great adventures for her in the future. She’s even got her hunter safety course all lined up already! Judging by the grin, I think we’ve got a permanent +ONE.