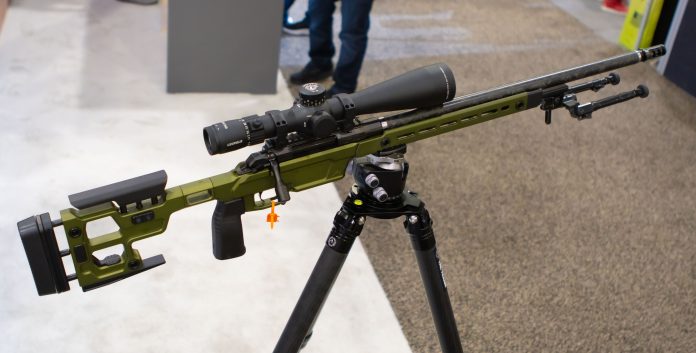 Companies have kept on innovating and moving product forward to the consumer and several have kept their releases in this traditional beginning of the year schedule. Whether they are at SHOT or not they’re bringing us a new guns and gear list to consider for 2022.

Most of the exciting items I’ve seen right now are optics. Dots are getting better and more diverse. LPVOs are continuing to trend lighter and more robust. 2022 is looking to be a good year for glass.

Aero Precision was the Day 1 winner, in my opinion

2022 is also going to be a good year for bolt guns and Aero Precision is among the chief reasons why.

Their new precision rifle action and chassis are going to allow the end user to put together their own short-action (for now) from scratch or in a partially assembled group that you then finalize yourself. This is bringing the popularity of the DIY or FIY (Finish It Yourself) marketplace to bolt guns from another popular partsmaker.

This will come as a standalone chassis and a standalone action, offered both barreled and unbarreled (for those who want to add a Savage pattern barrel of their own choosing) and drop into the Aero chassis or any Remington 700 chassis.

The action isn’t a Remington action, it is of their own design, but its mounting surfaces are Remington pattern.

Barrel offerings are planned in most of the popular short action calibers, starting with 6.5 Creedmoor and .308 Winchester. Barrels will be steel offerings from Ballistic Advantage with Carbon Fiber collaborations being worked on as well.

The precision rifle chassis is a clean work of aluminum art, QD’s, adjustable cheek and LOP, comfortable and convertible grips, all your modern creature comforts. Getting these guns built out for under $2k shouldn’t be a problem either when they are released to the wild later this year.

Seriously… All the dots.

Pistol dots continue to pour out of the optical houses. Holosun released several. EOTech dropped the EFlx you see above. Meopta, Sig, Steiner, the optical market is starting to fill out like the AR market when it comes to choice.

Gone are the days where your red dot choice was an Aimpoint Comp series at the premium price and a Bushnell TRS-25. The $129 offering of today is magnitudes better than that of even a few years ago.

I think we’re going to start to see the leveling off of the RDS market though. We’ll continue to see improvements, but like the AR market before it we have the common roles well covered in the space and the most common improvements going forward will be efficiency increases.

Don’t get me wrong, you can still run into a crowded booth. Between 3 and 5 when kegs start making appearances and folks are getting tired on their feet things get fairly full up in certain locales.

There isn’t the can’t get anywhere without swimming the sea of humanity, gotten my toes run over seven times, did I just run into a man wearing nothing but overalls type of crowding that shows can often see.

Part of this is due to Caesars. Part is due to attendance. But the result is that I’ve never been able to move around this show this fast, and that does not suck at all.

There seems to be a direct correlation between how tired everyone is and how much effort anyone is putting into chasing down the maskless. That is to say, this is a chaotic sea of humanity like it always is and with Omicron peaking nationally I don’t foresee this year’s SHOT crud being much cruddier than any other year’s SHOT crud. Staff just politely remind people that the rules say mask unless you’re doing a thing that the rules say no mask. Most people are moving to fast in any given direction for it to be anything other than what it will be. Lots of hand sanitizer and hand washing, but that was always a part of SHOT.