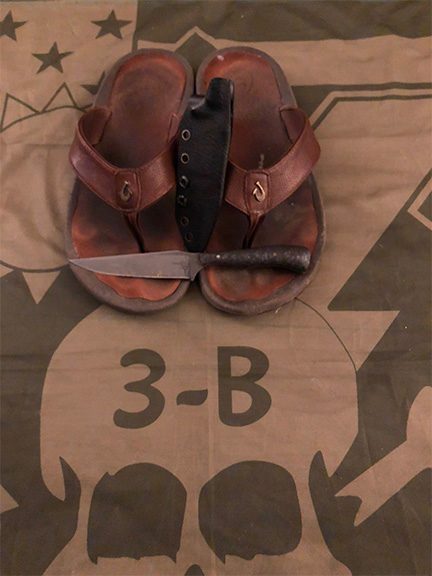 It started off as a typical Monday; some PT (Physical Training), a little admin nonsense and a short brief on the day’s planned shenanigans (I didn’t know what shenanigans were in store for that day). My coworker Nick is something of an avid fisherman. Normally, it is more of a casual dalliance but with the majority of our company working abroad, it has grown to more of an obsession. Any chance he gets he’ll go throw a line or at least scout for a new location. On this particular day I overheard him talking to Chris, the guy he’s wrangled into being his boon fishing companion, after the morning brief. They were talking about going fishing after work, hitting the local bass pro shop to get a new fishing pole for nick and some new lures to replace ones that had been lost.

As I prepared myself to go back to the paperwork, that keeps a bureaucracy running, Nick hit me with the “you wanna come with?” Initially, I dragged my feet, using the excuse of not having a pole and having work to do. Somehow, a short time later, I found myself in Nick’s truck driving to Bass Pro. Since I have only recently started my fishing career I ended up wearing my PT shorts from earlier that morning, a black t-shirt… and a pair of OluKai sandals (I bought these sandals a couple of years ago and they are the best pair I’ve owned).

a borrowed fishing pole from Chris and my trusty Toor knife (I couldn’t tell you the model, as it was a limited conceal carry run they did) strapped to my waist with a Hanks Kydex Reinforced Gunbelt. This is the second of three Toor knives that I’ve owned having lost the first one (a TK Tanto) on deployment last year and replaced with the same model afterward.

We drove about an hour out to their preferred fishing grounds where they had caught 3 King Salmon the day before. I’m sure it was something of a strange sight, two men fully rigged out in ballcaps, waders, fishing poles, and tackle boxes. Then tagging along with them is another young man in shorts and flip-flops. We hiked a good half to full mile out to the river and the spot they preferred. Once we reached the end of the trail we were traipsing along my two friends took a sharp turn off the trail and blasted their way into the river… in hip deep water. After a deep sigh and resigned shrug of my shoulders I took the plunge after them. The water we walked through comes from the glacier melt of Mt Rainier, so it was a little chilly.

Once I had successfully traversed the frigid river, with it’s very accommodating water rounded stones, Chris helped me rig up a line. To my slight horror, he then told me that I was going to need to get back into the river for the best fishing. He then left me ashore to wade, his very well insulated self, out into the swift-flowing waters. Not to be outdone I shivered my way in after him, in my very un-insulated PT shorts. The longer the day went the deeper I found myself venturing, until at one point I ended up nipple deep in the river. Unable to move because any step I took would have swept my legs out from under me and sent me tumbling downstream. Nick had to come out and save me from my flip-flop induced dilemma.

The first spot we fished gave us several bites but no “FISH ON!” So, we wandered further upstream until we found the miracle spot, which netted us 5 King Salmon between the three of us and my very first. Boy was she a fighter; after Nick hooked her he passed the line off to me. The battle raged for a solid three minutes, with the drag screaming and my shoulders aching, before I was able to land her. I gilled her and gutted her with my trusty Toor knife. I washed my knife in some river water and three weeks after, without any other attempts at cleaning, my Toor knife had only a few flecks of rust that I quickly scrubbed off. For those fishermen out there wondering, we used squids with spinners for bait.

That night my friend Nick fileted them, we put them on ice and my friend Chris smoked them later on. The manner in which, we smoked our fish was almost as deeply improvised as my fishing outfit. We took a Weber Smokey Mountain 22” Grill, some smoking pellets, mixed in some lit charcoal to keep the pellets burning and let those filets smoke for a few hours. Surprising all of us they turned out great! The point in this being, you don’t need a lot of the fancy gizmos that the outdoor world promotes (although they sure help), to have a great time in outdoor activities. Take what you have or can borrow and get out there. I went out with nothing more than a couple friends, myself, a trusted knife and what else I could find at hand. Turned out to the most fun I’ve ever had fishing.

All anyone needs to have a great time outdoors is to simply get out there.

John Gobby is a member of 2nd Battalion 75th Ranger Regiment. He has served with them for eight years and seven combat deployments. He has experience with both tactical direct action, tactical reconnaissance and covert operations. Recently he has started participating in competition pistol shoots and has a passion for long range shooting.