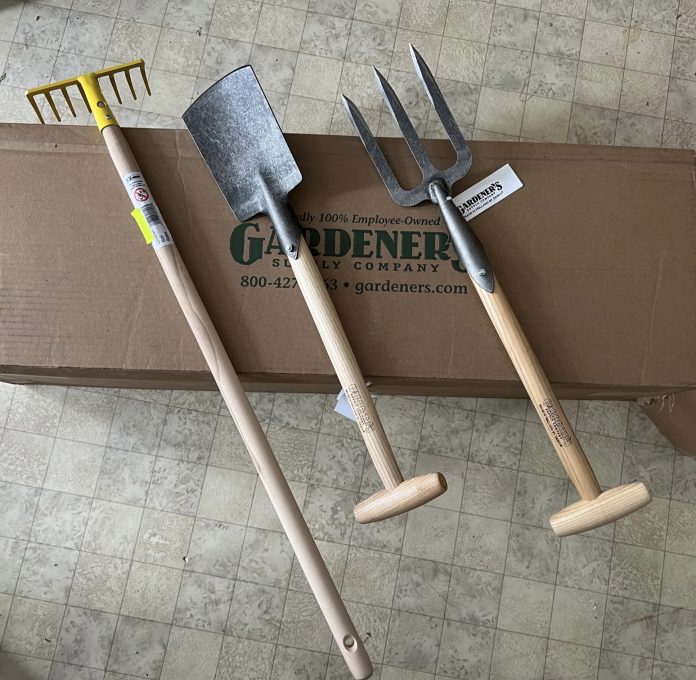 You know how my goal for this survival garden has always been to spend as little money as possible? This is because the more money you spend on the garden the more your produce actually costs you and you can end up with a sixty-four dollar tomato.

This is why I am always prattling on about creating free fertilizer,  and making your own compost, and saving seeds from year-to-year, and making raised beds out of salvaged junk, and starting seeds in waste materials like toilet paper rolls and take out containers. I want to make my garden veggies as close to “free” as humanly possible. It’s also good practice, because if something bad happens to the economy or the world, I won’t be able to just order whatever I want anymore.

Well, I broke my own rules last weekend and spent money on something other than soil. I bought three “short handled” garden tools to use in my raised beds.  I found them at Gardeners Supply and bought them because I am short, and my long handled tools were a bit unwieldy in my raised beds. These tools also have a lifetime guarantee, for what that’s worth. The shorter handles let me tend to the beds while sitting on an upturned bucket to avoid a lot of bending over.

I was also trying to save some money on storage.  Instead of spending $400 on a plastic shed to shelter my tools from the weather, I spent $60 on a 64 gallon lidded plastic tote/footlocker to keep in my garden. This allows me to have my tools sealed up yet close at hand without spending a fortune. These short tools fit nicely in this tote/tub and I don’t have to walk fifty yards back and forth to go get my tools from the garage. So though it cost money, it was a worth-it-to-me kind of expense. Sometimes you just have to make life a little easier on yourself and not feel guilty about it. There’s also something to be said for having the right tools for the job and having them where you need them when you need them.

So with all that said, let me talk a little bit about these tools and why I bought them.

The first tool I ordered was actually a child’s tool. It is a cute little rake that gives me a nice one-handed reach across the bed. Unlike the usual plastic kids tools though, this has a sturdy wooden handle and an actual steel head. It should last me quite a while with proper care. I can rake in some compost with it. Or upend it and use it to tamp down new soil or break up clods.

The second tool I ordered was a short-handled “made in Holland” garden fork. I think it’s supposed to be for lifting bulbs and such, but I wanted it for pitching compost around and breaking up clay. It has a lifetime guarantee, so we shall see.  The handle is a little shorter than I thought it might be, but from the perspective of sitting on a bucket it looks to be about right.

The third tool I ordered was a short-handled “made in Holland” spade. I bought this for the jobs which are too big for a hand trowel, but which don’t require my full size clay-busting shovel. This handle also seems to be the right length for sitting on a bucket working in a raised bed or transferring soil from one container to another.

At the end of all this I actually added a fourth tool which some of you may be intimately familiar with – a folding entrenching tool. This too has a short/folding handle and I can use it as a shovel, as a hoe, and as a pick,  (or reportedly as a latrine toilet seat, so I hear) so it’s really a four-in-one garden tool (I bought another one for my car). This too can be used while perched on a bucket working in the raised beds. I just used it yesterday to shovel out my compost tumbler. To top it off, it’s made the the USA, which you have to look hard for to find these days.

So while I strive to not spend money on my garden, these tools will ultimately make my job easier and are necessary for doing the job properly. Sometimes you just have to break your own rules.