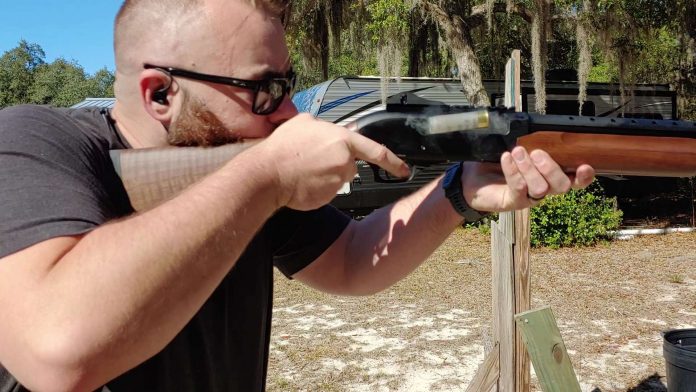 You know I love a good excuse to shoot shotguns. Most recently, I stumbled across a shotgun qualification from the state of Georgia. My northerly neighbors seem to publish a number of their firearm quals, and at first sight, I knew I needed to jump on the Georgia shotgun qual. I looked it over, loaded up my range bag, and hit the range on a fine Saturday morning.

The Georgia shotgun qual is a relatively short course of fire with three different stages of fire and various strings of fire. The round count is somewhat low like most shotgun quals and most shotgun engagements. What we need ammo wise is: 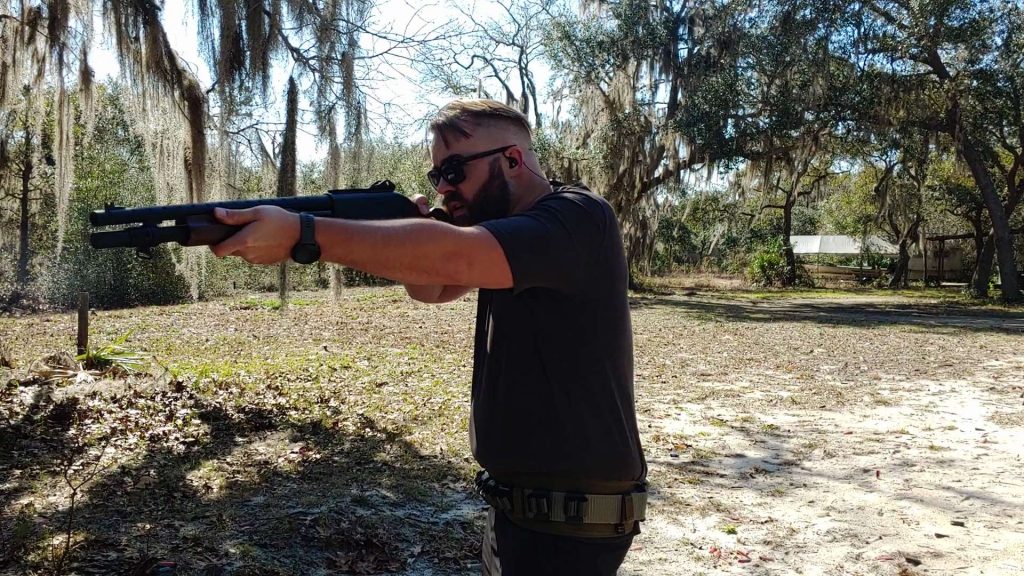 You’ll need a shotgun, and you’ll need a holstered handgun as well. Shooters will need two targets, preferably human-sized. The state of Georgia uses SQT A-1 targets, but you need a target with a head and body portion. I used the VTAC targets for my run. You’ll also need something to act as cover. I used a PTSB-Lite barrier and a small table to elevate it. Also, a shot timer is kind of a must-have.

Before shooting, the manual, which you can find here, encourages you to pattern your weapon, and I strongly agree. Pattern your shotgun! It’s critical to your success. Also, since this involves slugs, make sure you know where they are going. 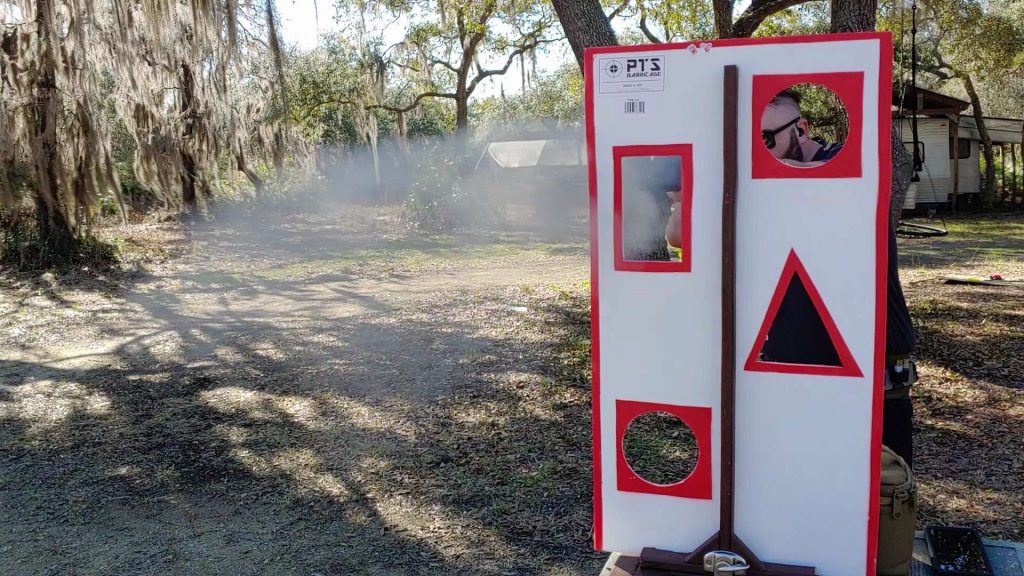 You’ll repeat this drill once more, but this time you’ll pie around the left corner of cover and engage the left target.

Four seconds isn’t a ton of time to move behind cover, pie around cover, and engage a target. It can be done without a ton of difficulty, but you’ll feel the pressure of the timer. You need to engage the threat zone accurately, and I went for chest shots. I’m not cocky enough to try headshots at this range. The Georgia Shotgun qual doesn’t require a headshot at this range.

At 15 yards, we are well within buckshot range and in the range that shotguns dominate at. Load four rounds into the magazine tube and keep the magazine empty. You’ll be outside of cover first, and at the beep, you’ll dive behind cover and pie around cover.

As you see the two targets, you’ll engage each target with two rounds, and you’ll need to do so in eight seconds. The time is a little more generous here. Eight seconds is more than enough at close range with a shotgun. Challenge yourself a bit more and see if you can do the whole thing in six seconds. 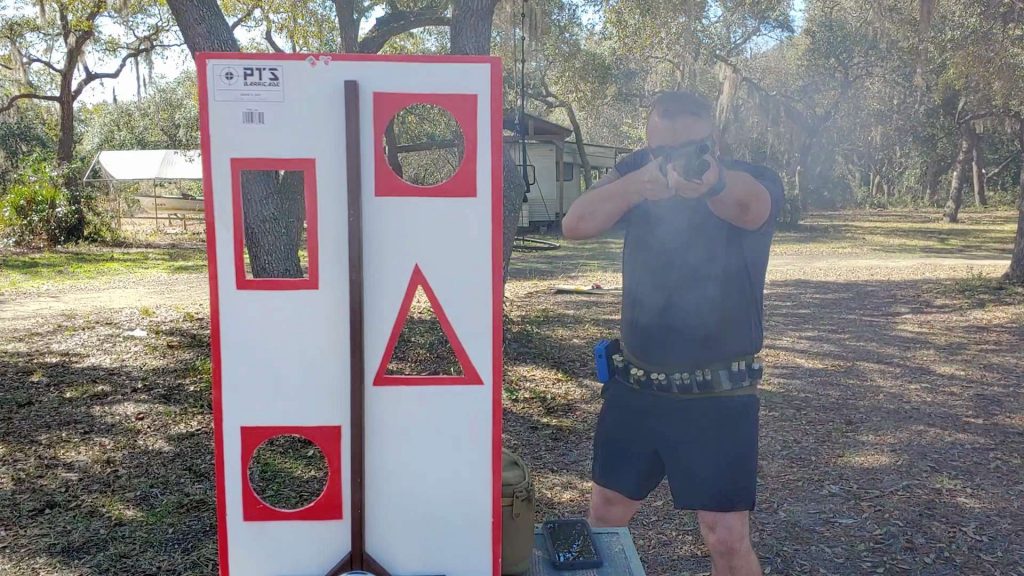 After you run the gun dry port, load one slug into the chamber and a second slug into the magazine tube. The Georgia shotgun qual calls for an instructor to issue the order, but I’m sure you can figure it out solo. This is not timed, but go fast if you can.

For string two, you’ll start behind cover. At the fire command, lean out from behind cover and palace slugs into the brain housing group of each target. Six seconds isn’t super generous, but not overly challenging either. If you can do it in four seconds, you’ll feel the time constraint.

Although the manual lists this as stage four, I assume it’s just due to the Georgia public education system. Anywho, scoot it on up to the seven-yard line. Now we are in a range where a shotgun does more than dominate. It reigns supreme as the battle-ax of CQB. 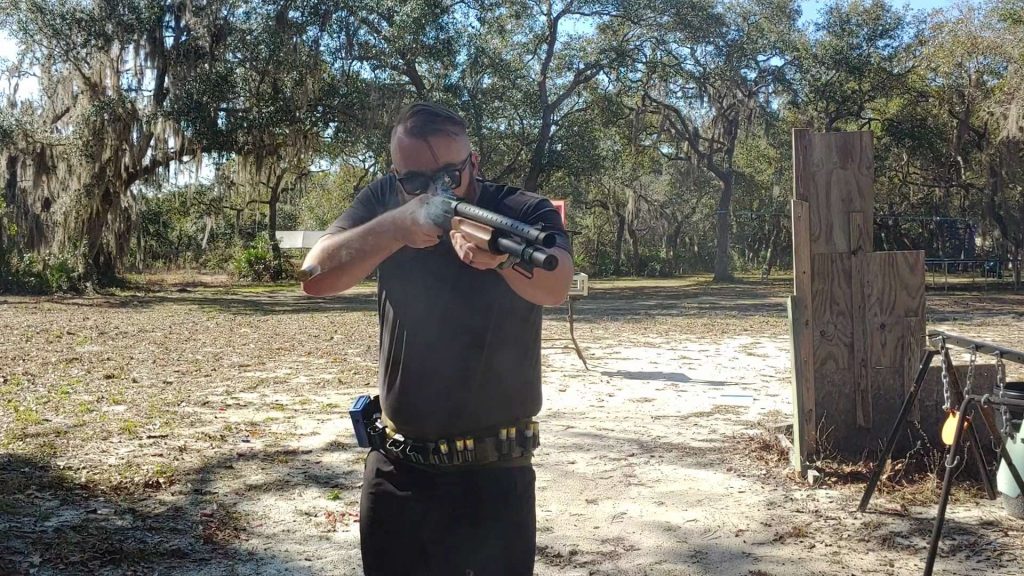 Six seconds is still somewhat generous. At seven yards, it’s tough to mess up and miss, so accuracy isn’t a major issue. However, if you gum up the draw, you’ll find yourself tight for time. I do love that this part of the qual calls for a transition. Shotguns are low-capacity weapons, and if you run dry, they are slow to reload.

Having solid transition skills with a shotgun is a must for duty use.

Here’s what the manual says on scoring the Georgia Shotgun qual. 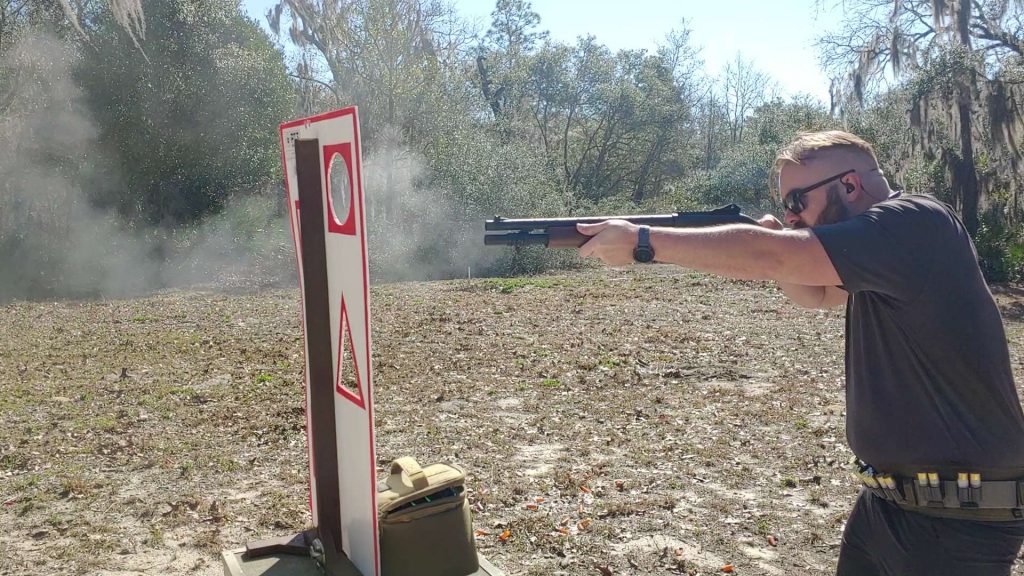 I’d tighten down the times on stages 2 and 3, just hair. They are a little loose. I will give Georgia credit, and the times are nowhere near as generous as other quals out there. They have a lot of good stuff in this qual, but I would implement port, and tactical reloads under time and as part of the drills.

Keeping the shotgun topped off and ready is critical to its employment, and doing so under time can be tricky. Overall, it’s a good piece of training and if you’re a shotgun nerd, give it a spin.