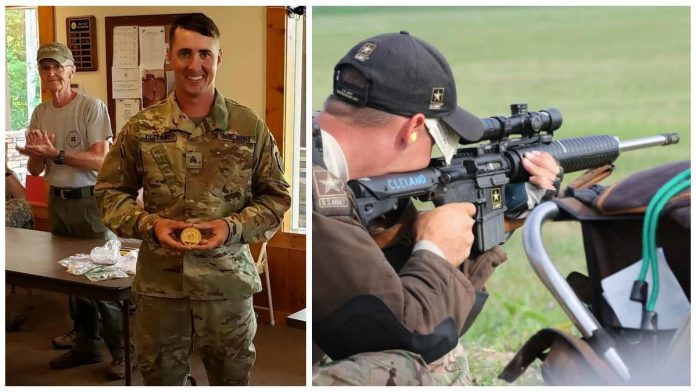 A member of the U.S. Army Marksmanship Unit’s Service Rifle Team landed all 80 rounds in the 10-ring at a High-Power Rifle Course earlier this month.

The competitor, Sgt. Benjamin Cleland of Swanton, Ohio, pulled off the feat at the National Rifle Association’s 2019 Charlie Smart Memorial Regional in Oak Ridge, Tennessee on June 2, with a score of 800-34x. This means Cleland not only notched 80 back-to-back hits in the 10-ring but that 34 of those nailed the even smaller “X” ring at the target’s dead center. For reference, at 600 yards, the 10-ring measures 12 inches while the “X” is 6 inches. Cleland’s feat, landing a perfect 80-out-of-80 inside the 10-ring, according to the Army, is something that has never been recorded as on a service rifle in this type of match. (Photo: U.S. Army)

The 80-shot course is fired in four stages. This begins by firing 20 rounds from 200 yards in a standing position, followed by 20 sitting/kneeling, rapid-fire rounds before delivering 20 rounds from a prone position at 300 yards. The final stage, at 600 yards, consists of a further 20 rounds. A perfect score is 800, or 10 points for each round in the 10 ring.

The previous high score with a service rifle was a 798 set by Marine Gunnery Sgt. Julia L. Watson.

Service rifles in the match are limited to M16s, M14s and M1 Garands with a maximum of a 4.5x power scope.