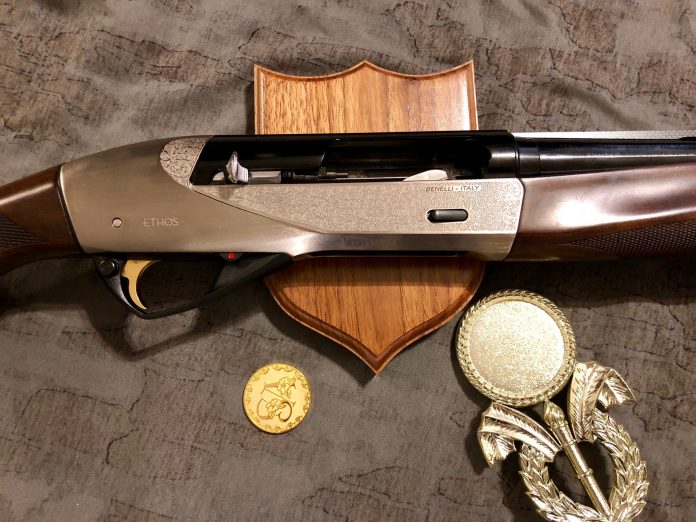 If I mention the name Kim Rhode would you know who that was? How about Ginny Thrasher? Mckenna Dahl? Even if “you” know, the likelihood is that most of the rest of American society would give you a blank look. That’s because, though these women are Olympic medal winners, their sport isn’t a politically correct one. These American Olympic champions compete in the shooting sports. In case you haven’t heard of any of these outstanding women either allow me to enlighten you.

With such an outstanding Olympic record, why has no one in the general public ever heard of her? Why have feminists not embraced her and trumpeted her story? Because the primary equipment of Kim Rhode’s sport isn’t a balance beam or a soccer ball – it’s a shotgun. Kim Rhode is a skeet shooter, currently using a Beretta DT11 .

Ginny Thrasher’s events are the 10m Air Rifle, and Three Position Rifle.
Thrasher was a Gold Medalist in air rifle in the 2016 Summer Olympics, and the first American gold medalist of any type in that Olympic games. That was in addition to being an NCAA individual rifle champion and a standout on the multi-time NCAA champion West Virginia University Rifle Team.

Has anyone in the general public (let alone young girls) heard of her? Probably not – because even though Thrasher’s air rifle is nothing more than a high tech pellet gun, even the small amount of coverage she got from the Washington Post at the time of her medal win characterized her air rifle as a “high-powered, German-made weapon“.

Mckenna Dahl is a 2016 Paralympic Bronze medal winner in Air Rifle, in addition to being a previous medalist in the national championships. She won her Olympic medal with an Anschutz 9003 Precise.

So why isn’t Dahl’s picture pasted on the walls of young girls’ bedrooms? Because her sports equipment has a stock, a barrel, and a trigger.

There are strong upcoming female competitors in handgun as well. In addition to all of the above Olympic glory, just this past week a 13 year-old girl named Justine Williams achieved the rank of Grand Master in the Production Division of the United States Practical Shooting Association. This teenage phenomenon already holds Master Rankings in three other divisions. If this were any other sport but shooting, this girl would have news media crawling all over her. And Feminists. And talk show hosts.

But nope. Because even worse than shotguns and air rifles, Williams used a semi-automatic handgun for her achievement.

If ever there were strong female role models in sport, it is these female competitors. In fact, I would argue that these women are BETTER role models.

Other sports “heroes” can be arrested or be involved with drugs, alcohol, and violence yet are still eligible to play their sport. Pro football and pro basketball have especially egregious records in this regard. The shooting sports however involve owning and using firearms. Criminal behavior is, of necessity, disqualifying in the shooting sports. If you want to find a sports competition with sparkling athlete records – follow competitive shooters.

Female shooting champs provide young girls with excellent positive role models. Unlike dance or cheer or gymnastics, or other “traditional” women’s sports, the shooting sports do NOT promote an unhealthy body image, or subtly reinforce disordered eating. Unlike some other women’s sports, there is no advantage to be gained by the use of performance-enhancing substances, hormones, etc. (Does anyone else remember the East German Women’s swim team in the 1970’s and wondering how often they had to shave their mustaches?)

Also, unlike other sports where children are often pushed beyond their physical limitations to the point of injury, the shooting sports have a fantastic safety record.

In fact, because of their nature, the shooting sports stress concentration, safety, and personal responsibility far beyond what most other children are exposed to. There aren’t any consequences to misusing a soccer ball. But misuse of a competition shotgun, rifle or pistol, in addition to endangering one’s fellow competitors, can break any one of a myriad of local, national and (in the case of world stage competition) international laws. There is no screwing around with the equipment when you are on a shooting team.

In an era when feminists are clamoring for attention to be paid to positive female role models in sports and everywhere else, why aren’t these female Olympic medal winners getting the attention they deserve? And why aren’t the shooting sports promoted to young women as the wholesome, responsibility-filled, body-image-friendly competition sports that they are?

Because “Guns are Evil”, that’s why.