It’s been a good year for training. Autumn is by far the best season for it too. The lingering summer heat isn’t stifling but it’s warm enough to be comfortable and cool enough to avoid heat stroke. I’ve focused heavily on carbine this year as the area I am developing. Yes, I need to dust off and work handgun too. Handgun only or joint handgun and carbine courses will be of great benefit.

However, before all that.

Steve Fisher is Sentinel Concepts. Since the 90’s Steve has been teaching and advancing firearms instruction. Magpul Dynamics catapulted private firearms training with Art of the Dynamic Carbine and Steve was one of the lead instructors in that space.

I’ll admit I binge watched that DVD set on repeat as an eager Marine.

At this moment Sentinel Concepts is offering their full 2019 course calendar at 10% off for early registration. Steve’s class compendium is already a tremendous value but early sign up will save you cash that can be reinvested in ammo, equipment, travel, or upgraded lodging.

Take advantage of it.

Essential Carbine Employment is structured in just that mentality. What is absolutely necessary for you to get into the fight with your rifle and win quickly? Less time in a shooting scenario = less time being shot at. 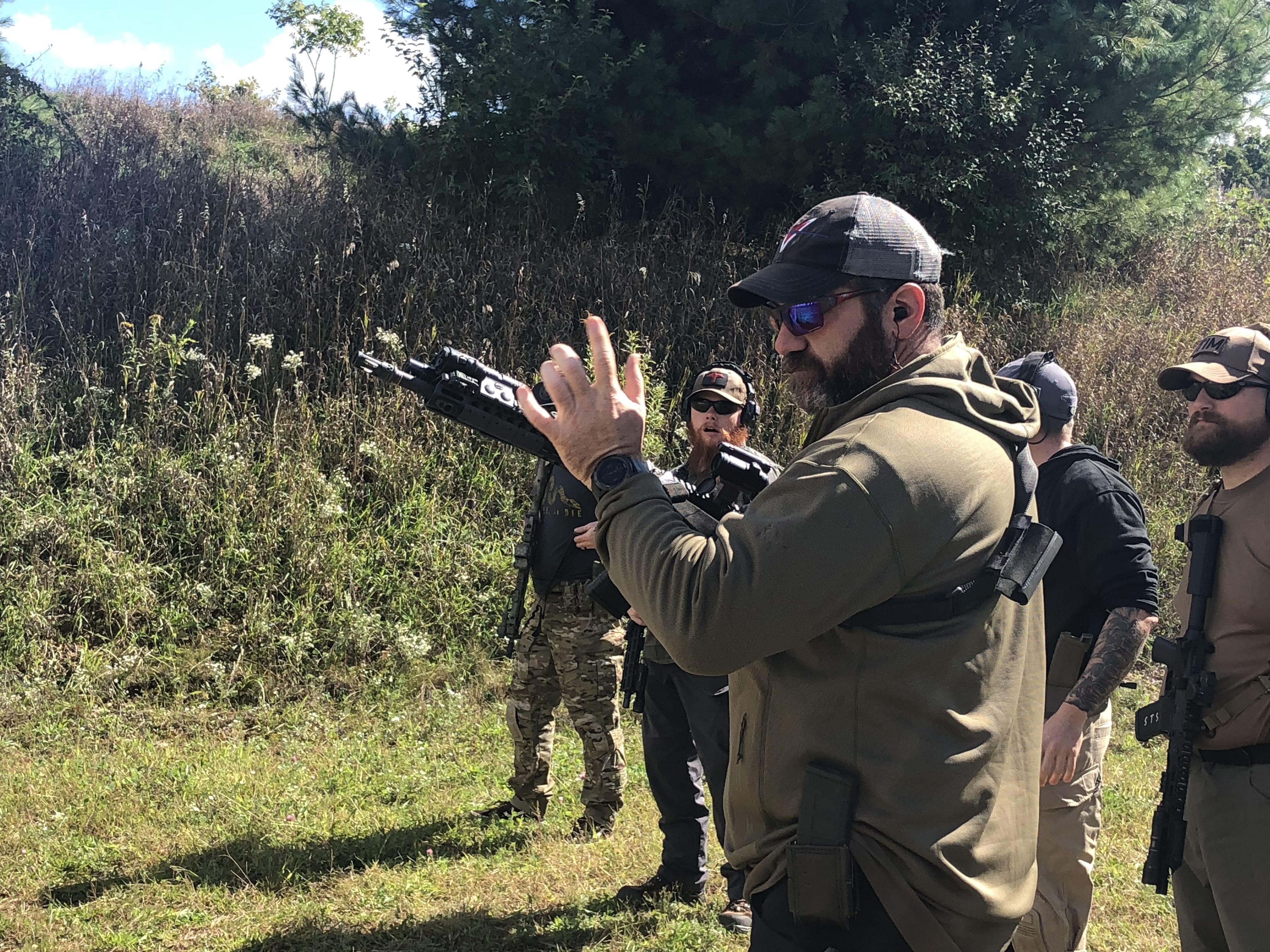 This is a defensive fighting course. It’s a reactionary design framework that centers around the concept of quickly grabbing your rifle and putting it to use against immediate threats.

This framework is universal in application. Grab the rifle and fight from a car, patrol or personal. Pick up the carbine and fight through to defend you home, day or night. Enemy contact, point and shoot. An armed reaction has the same goal regardless of your personal status as citizen, sworn officer, or troops in contact.

Training with live munitions is a moderate to high risk activity. When done safely it’s of great value. Furthermore it is a mitigated risk by simply being smart about what you are doing. For that increased risk we start slowing down and thinking about everything that is occurring on the range.

“Do not shoot each other, if it looks like we’re going to have a problem with that you are going home.”

There was a trauma kit staged center of the range with supporting equipment in most vehicles and tourniquets on each individual student. Everything in place to minimize time spent openly bleeding out.

As student you should also know your training location and communication plan. The instructor will remind you. If they don’t it is incumbent on you to ask about it to remind the course. This isn’t rude (unless you are) it is safety. Everything starts with a good zero on your optics. It doesn’t matter if you’re shooting iron sights, RDS, LPVO, Holographic, or an ACOG like me, you need the carbine shooting where you point it.

Therefore, do everything in your power to have a zeroed rifle. Use a bipod, bags, anything to mechanically secure the rifle and shoot effective groups to adjust off of.

Come to class with a zeroed rifle. Furthermore if you’re using an unzeroed rifle for self defense… you’re doing it wrong. Essential Carbine is a ‘pickup’ course. You grab your rifle and shoot. The zero you have on your gun at that moment is the zero you’re fighting with.

Which brings us to the next topic.

The absolute or ‘mechanical’ zero is found and refined through repeated slow fire grouping and adjustment. In a perfect world it would take two, maybe three groups to do. In reality it can take hours at a course or training event. This time consuming process is circumvented by prior preparation and a fighting zero exercise.

Firing 5 rounds off hand standing at 50 yards. If rounds are center mass on the target, good. If not, throw a quick adjustment on the sight and fire once more. You’ve got what you got.

The framework of the fighting zero, picking your rifle and engaging a direct immediate threat to your life. You don’t have time to shoot a few groups before going to the gunfight.

The ACOG excelled at this course. I was the only crotchety stubborn Marine clinging to my RCO and irons while everyone else was in the RDS camp with an LPVO or two floating around also however the ACOG ran.

I did run an LPVO on an M16A4, with many an admiring nod, and an RDS on an MP5 during the course too for shits and giggles. Overall modern optics of all varieties surpass iron sight effectiveness. 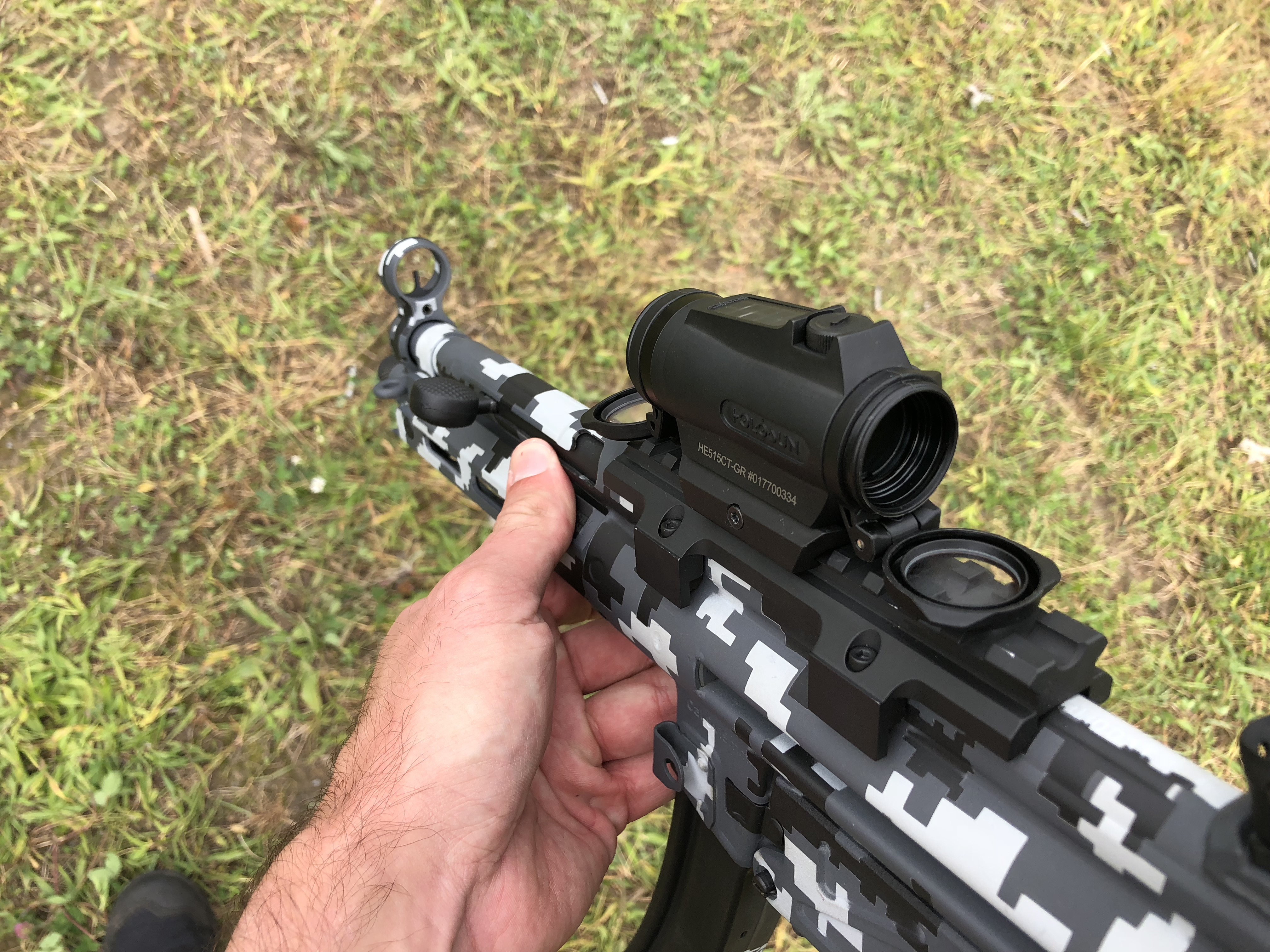 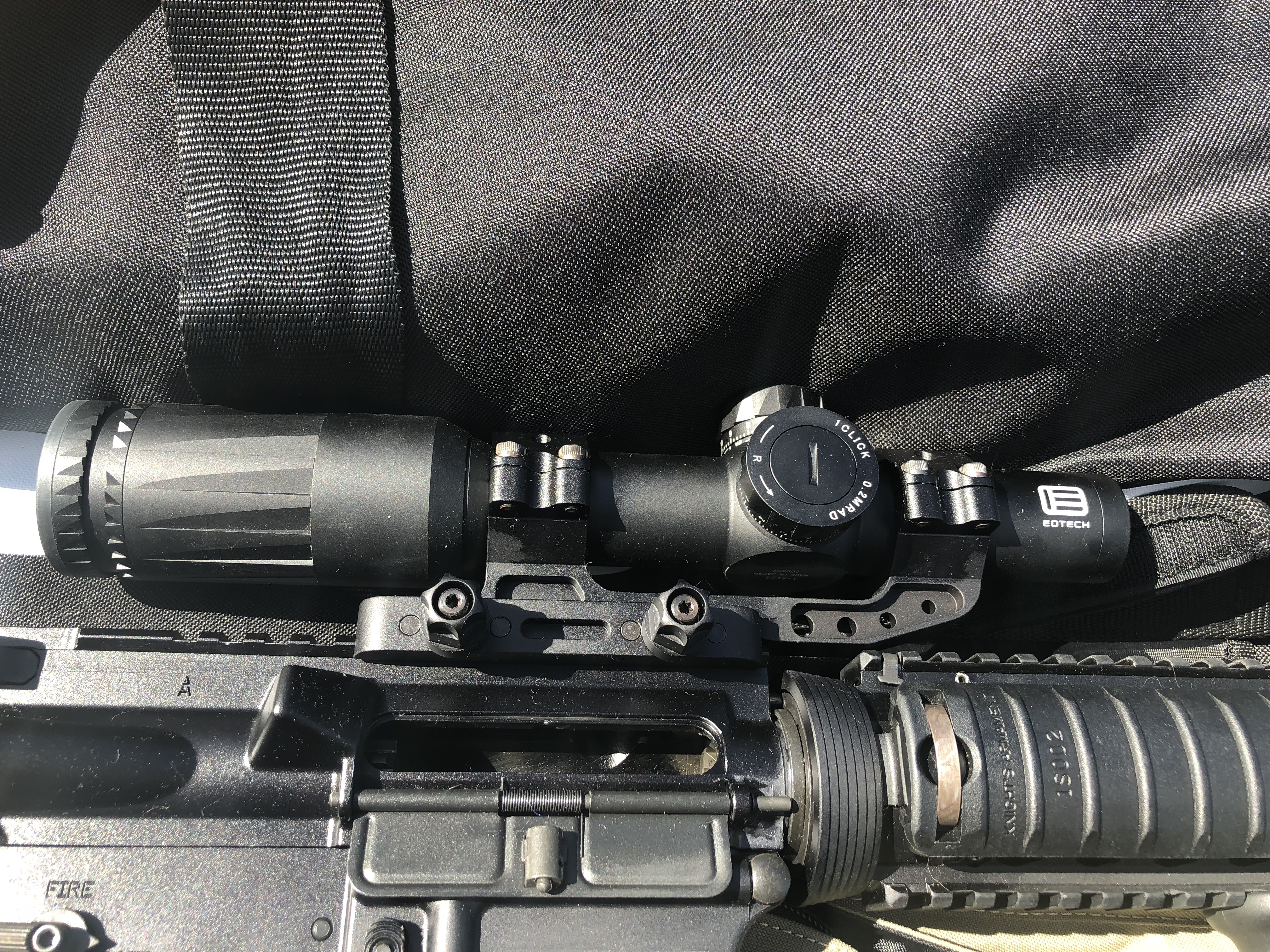 All the rifles brought were FN‘s minus the Zenith MP5. Damn fine firearms.

Originally intending to shoot the rifles all in a circuit, I instead just stuck to my favorite for most of the course. 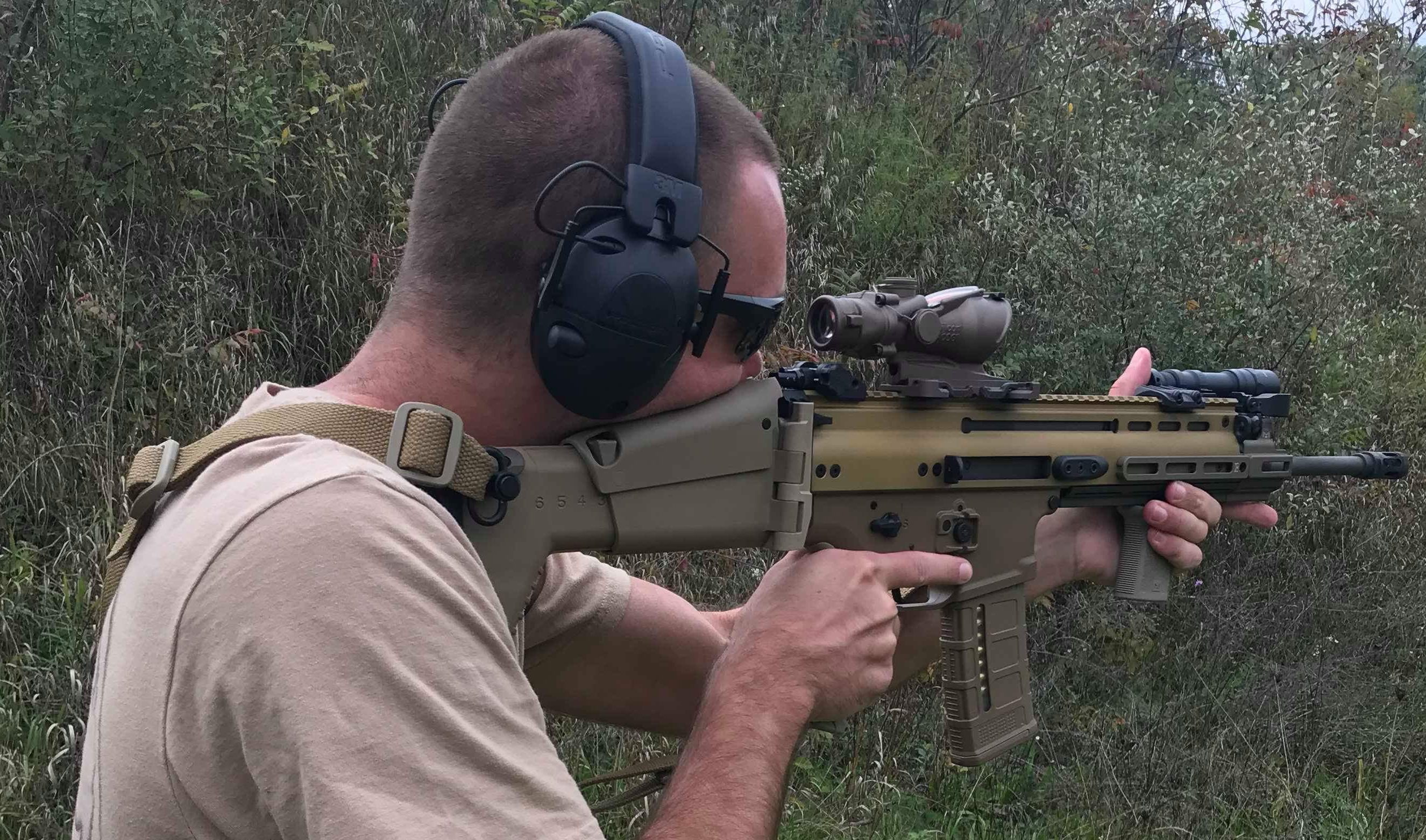 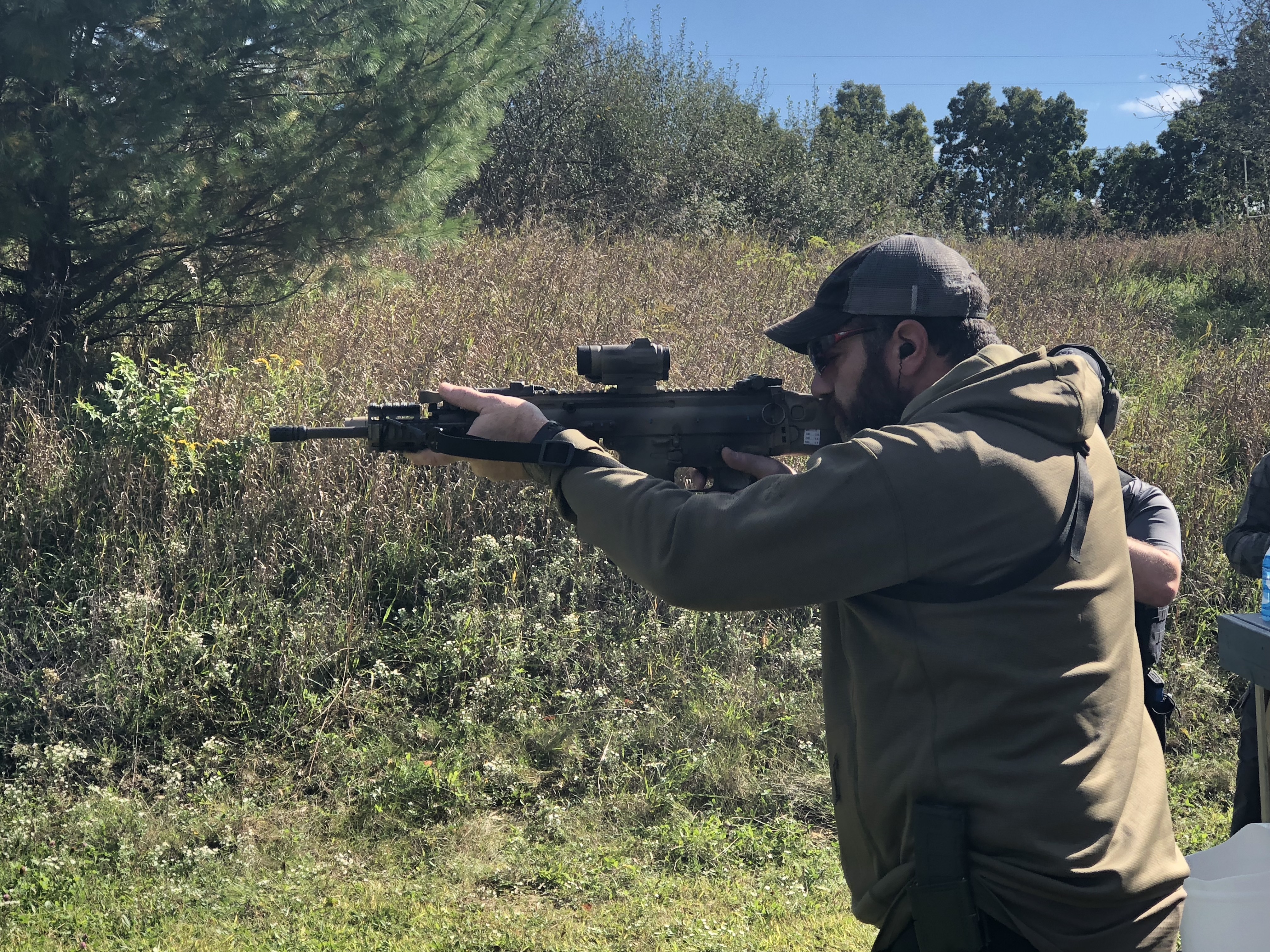 The understood mechanics of how to mount a gun to your body have evolved in this golden age of firearm practical sciences. Steve ascertains a student’s current habit and then nudges it to refine and streamline it.

What does that mean?

The premise is simple. The rifle and the handgun are co-partnered mechanically in many more ways than people realize. Think of shouldering the carbine in the exact same manner as your draw your sidearm. This change in practice turns the swing turret like motion of the traditional ‘low ready’ into a more useable presentation.

Old low ready’s fatal flaw is that no one actually carries their rifle like that for long. You aren’t grabbing the rifle, getting in low ready, and then shooting. The middle step doesn’t exist but we practice like it does. In certain circles, especially competitive ones it absolutely does but that’s highly limited application. The low ready is very fast when the motion is short. When that motion is turned into a full swing over shooting the target and swinging past is all but assured.

The rifle ‘draw’ Steve covers brings the controls into the same space your pistol occupies and presents it an a near identical manner. Rifle comes up and presses out before locking onto the stock pulling into the shoulder. The lever motion on your shoulder is mitigated and you end up with a far more accurate presentation.

It sounds a little crazy but it works. 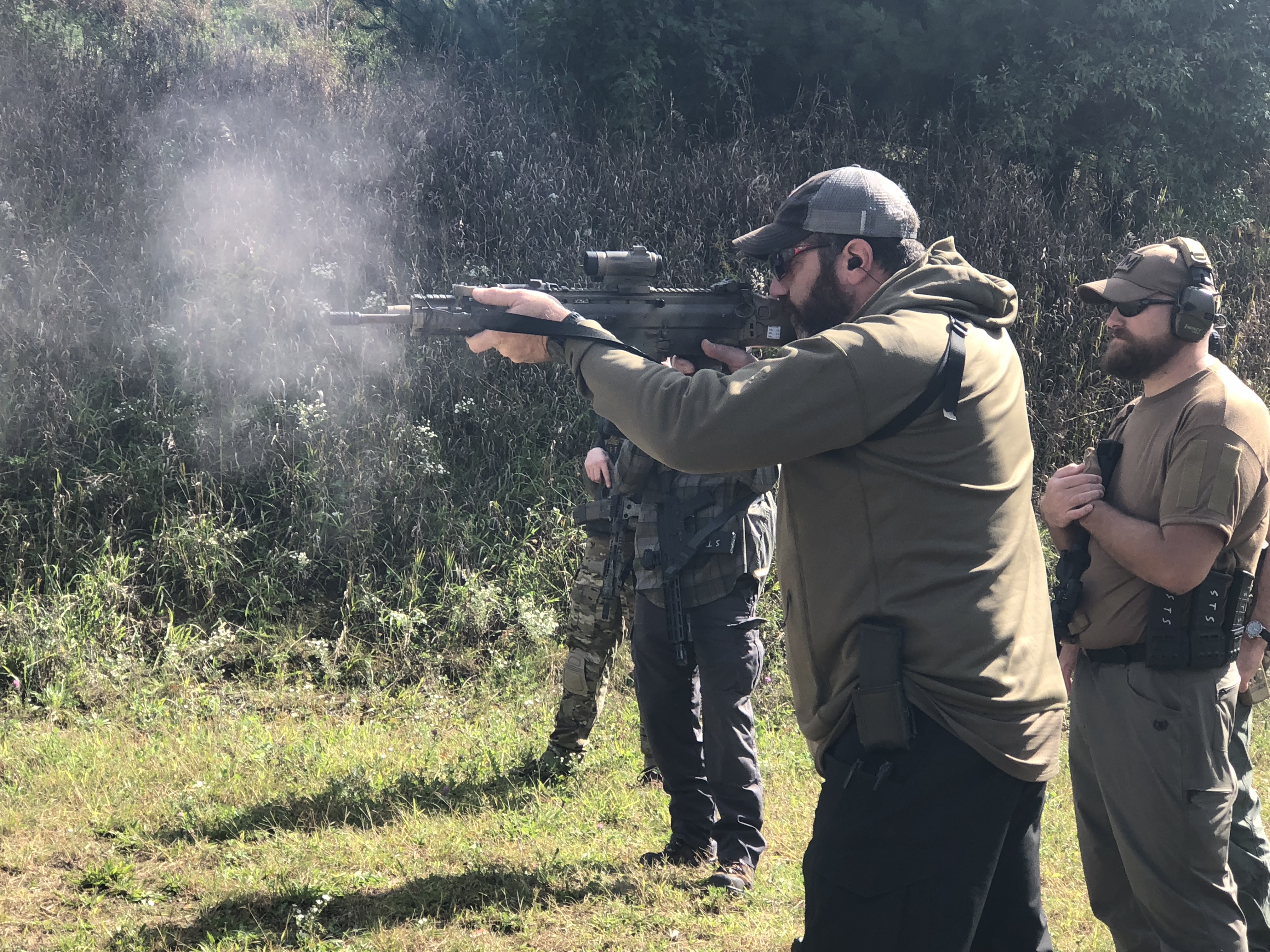 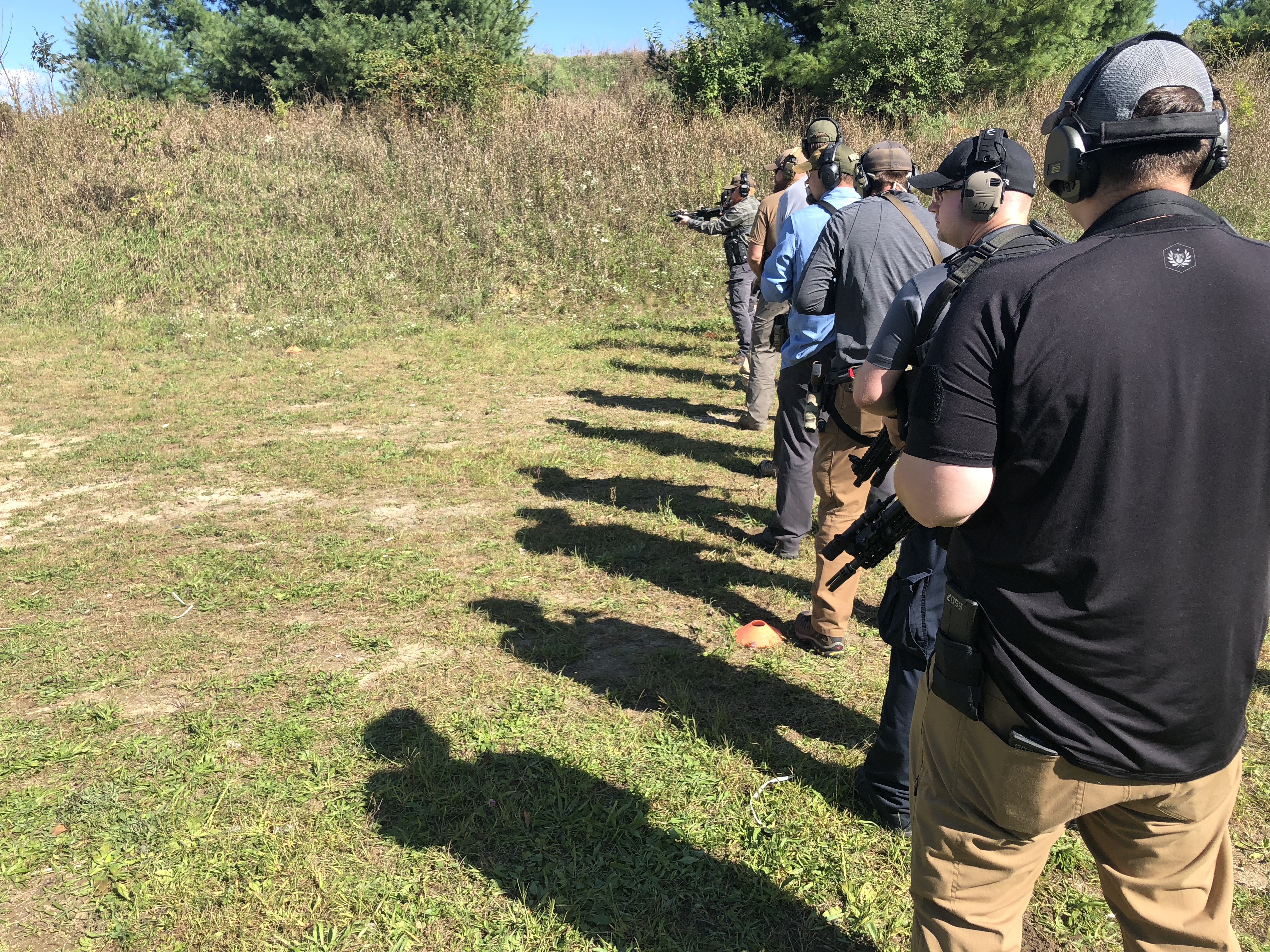 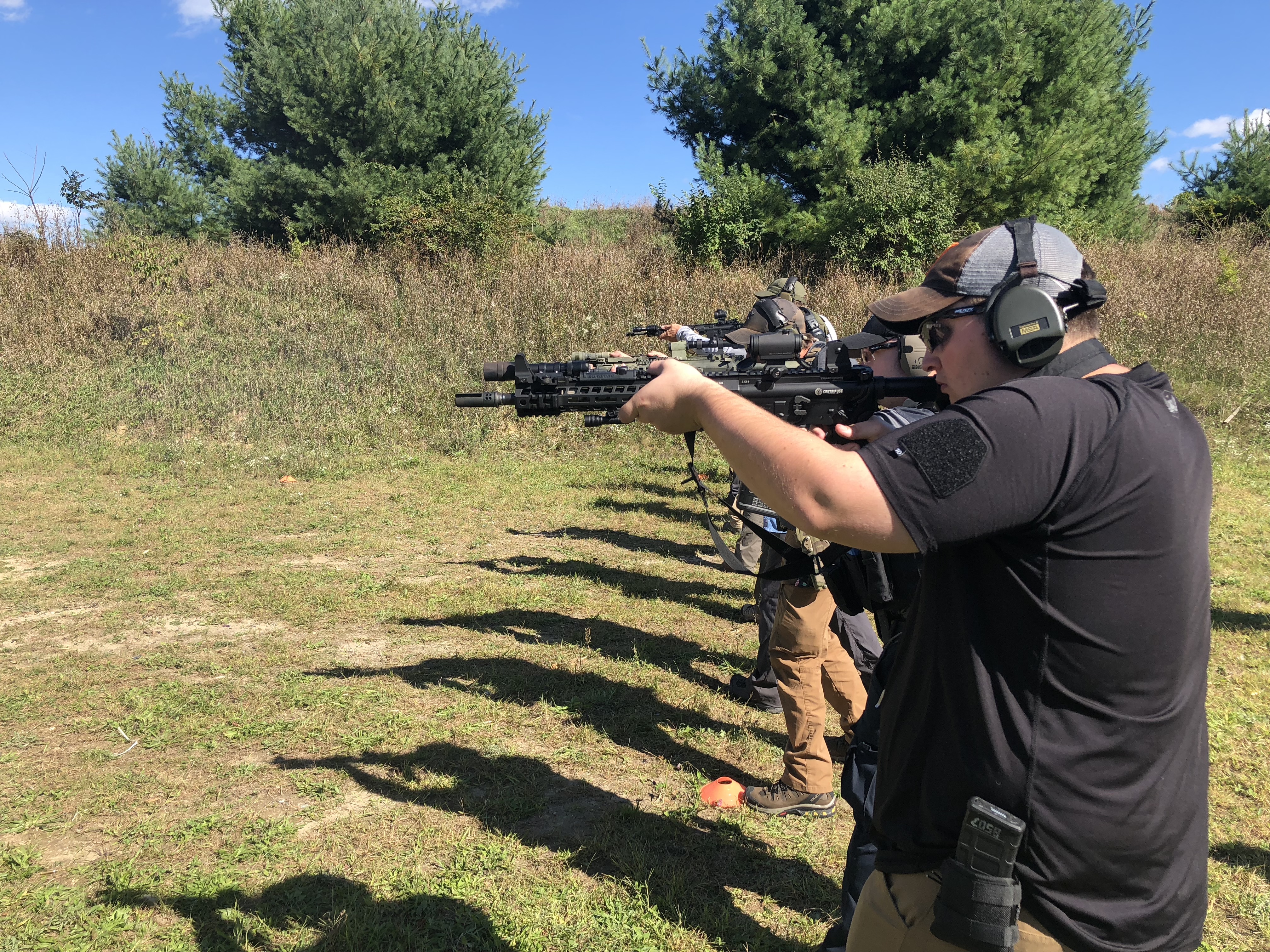 While both admirable goals in theory, let us speak a little truth to power.

Taking the time to pivot and square to the target during training is a product of administrative safety, not tactics. It doesn’t improve your practical accuracy down range. And as for that armor… It’s either gonna catch a round and save you or it isn’t, assuming you have it on and it has a rating for the threat level you are facing.

Your best defense isn’t that plate hopefully protecting your squishy innards. That rifle in your hands sending quick and effective shots into their squishy innards is the best armor. Stopping someone from  shooting is better than partial body coverage with material that can be shot.

To this end Steve takes the traditional pivot and square up and turns it into a draw/presentation where the torso moves enough to get the shots onto the target. The lower part of the body does little, because it may not be able to do anything. These presentations work seated and with limited space rather nicely. 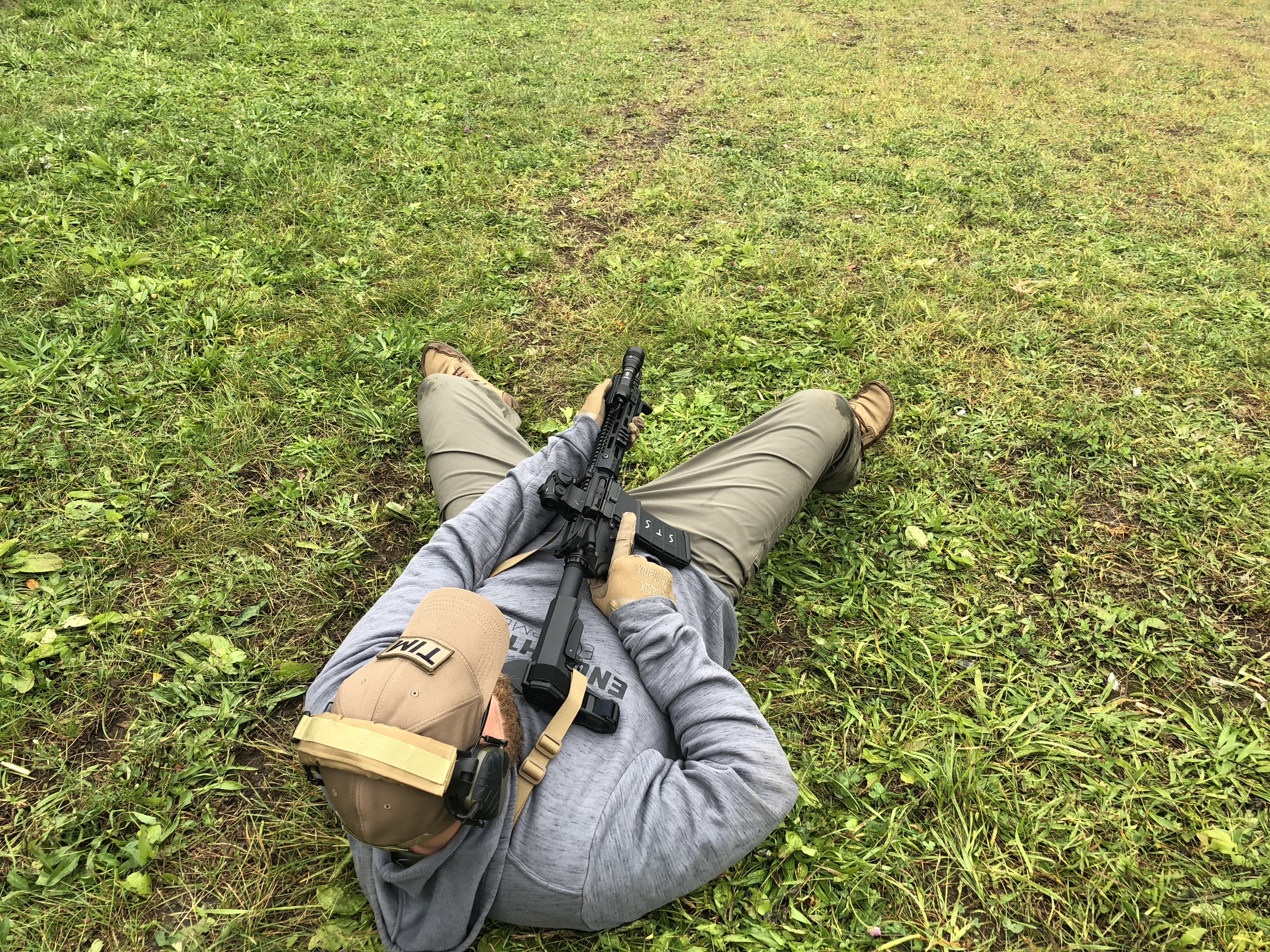 AKA Shit I fell down.

Probably the most illustrative drill showcasing body to carbine mechanical accuracy these positions aren’t ones you would choose to be in under ideal circumstances.

Kneeling, prone, supine, urban prone, sitting. You may be in one or more of these positions very quickly and not necessarily by choice. 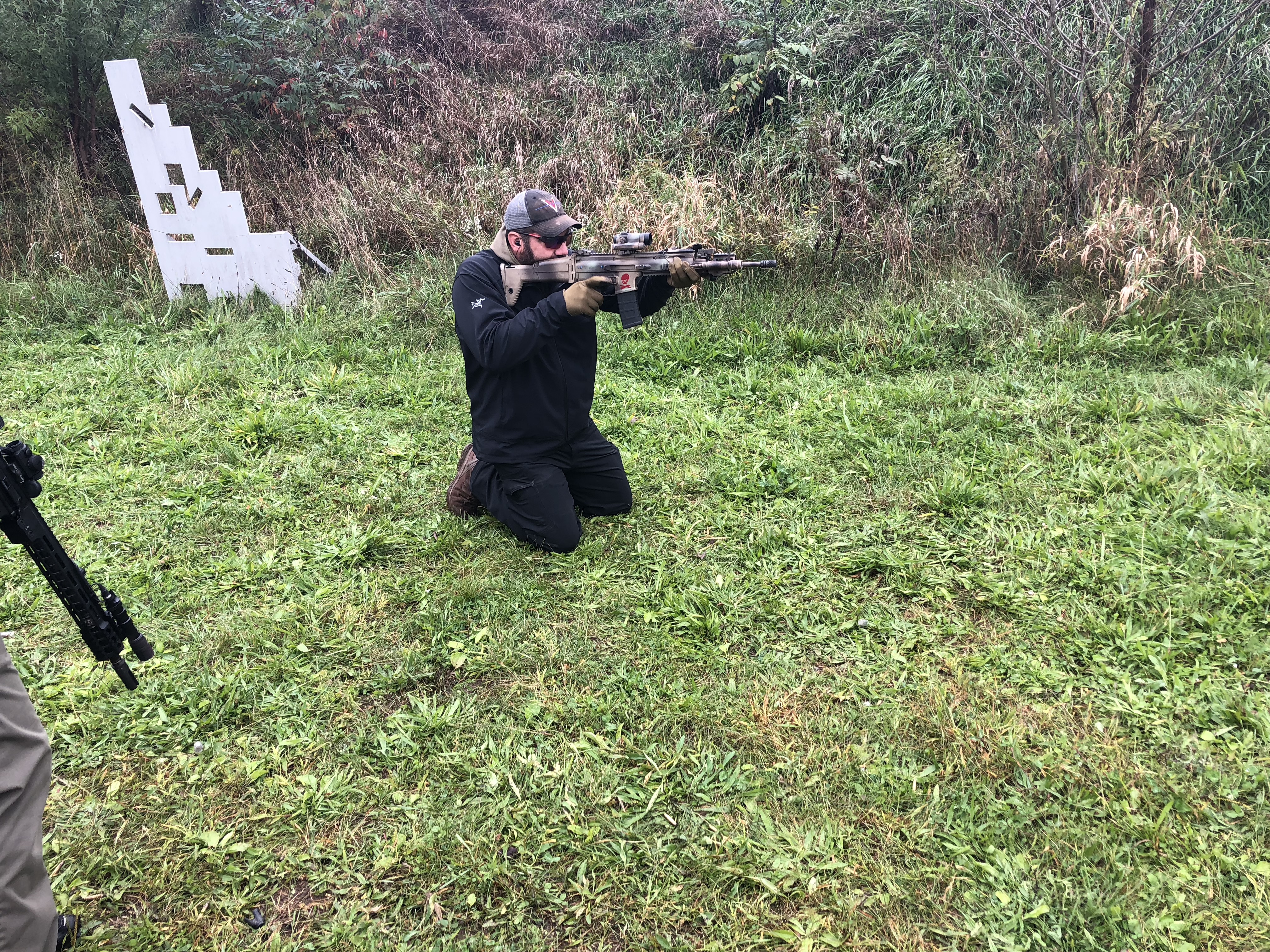 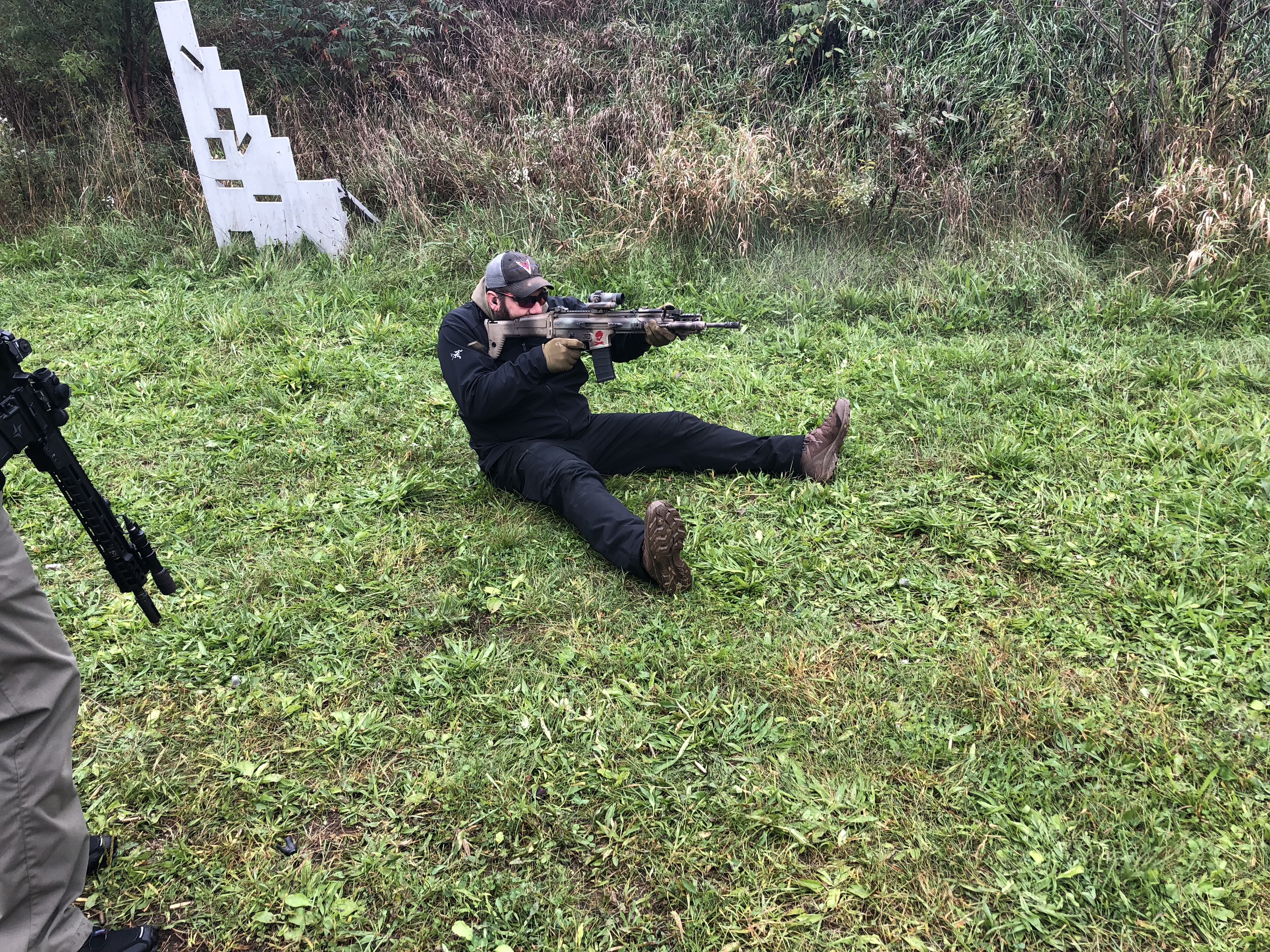 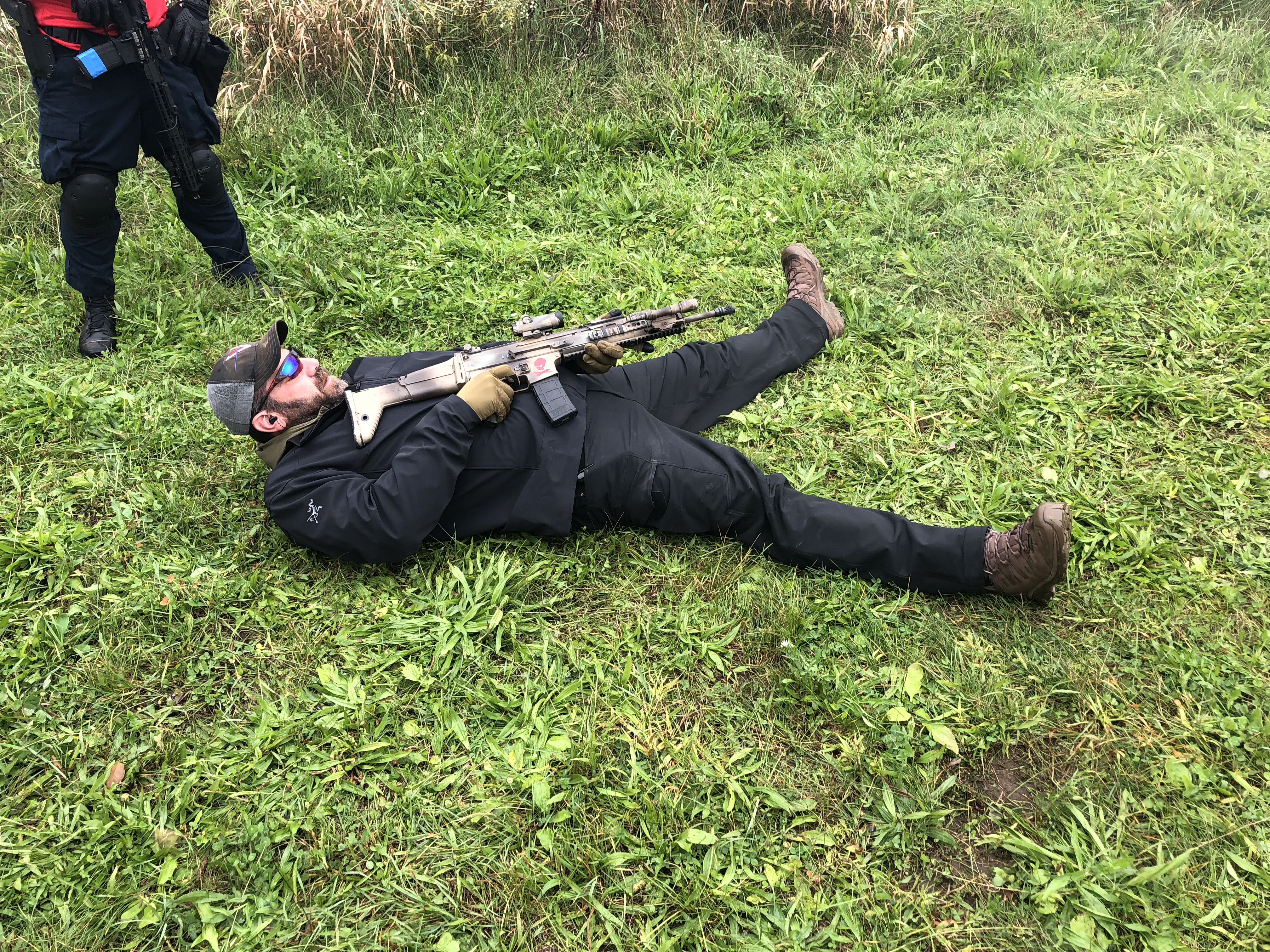 So much about shooting is teaching and conditioning your body to what feels correct. If it feels right and hits the target it is probably just fine. These alternate position drills are getting your body to feel that you can still work your carbine and just what that looks like.

So if and when you find yourself in such a position under any circumstances you have experience familiarity. The situation doesn’t produce a dead stop in your brain that could cost your life as you improvise.

Dropping, deliberately or not, is just a change in the fight and should not be the end of it. 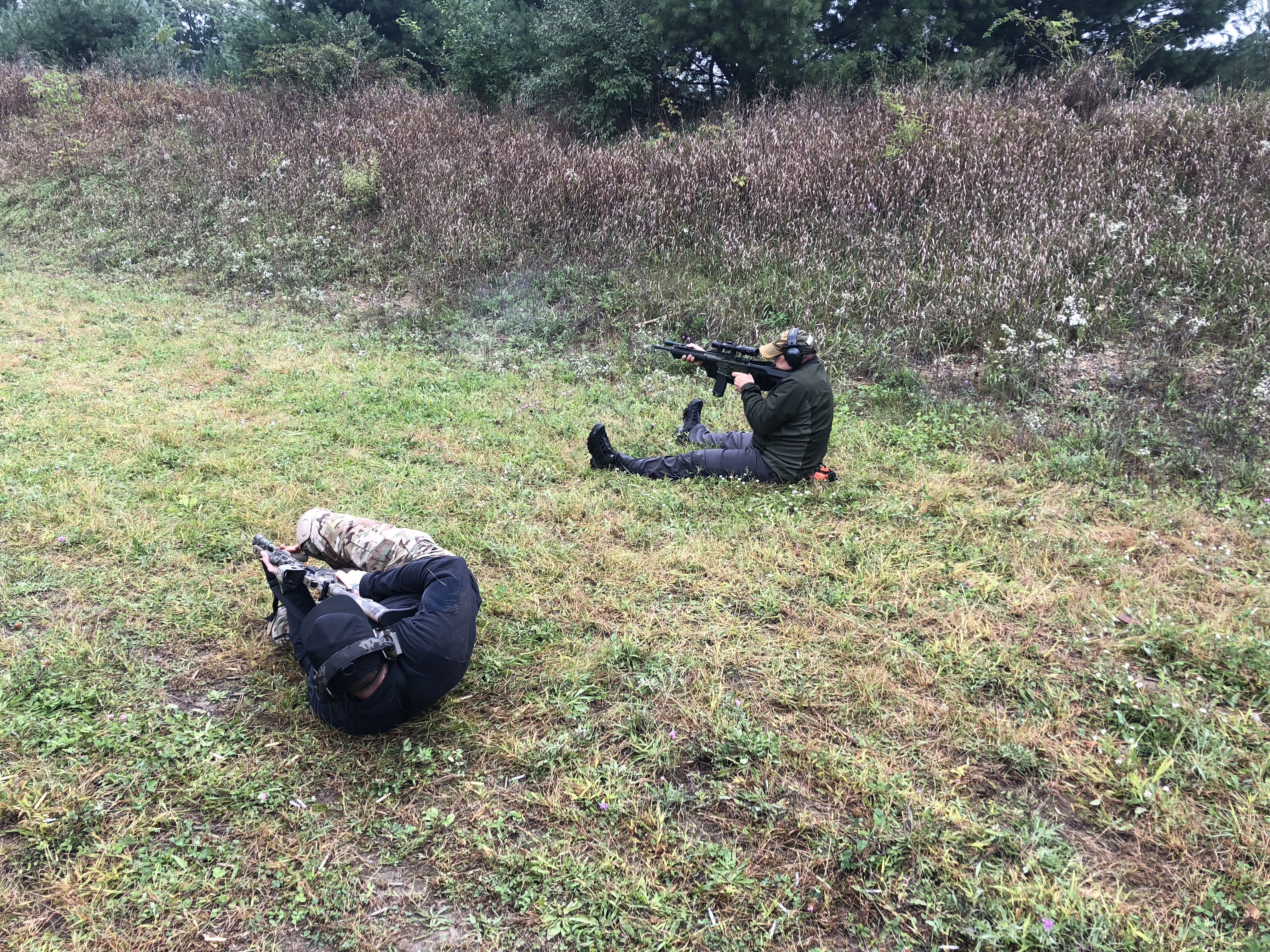 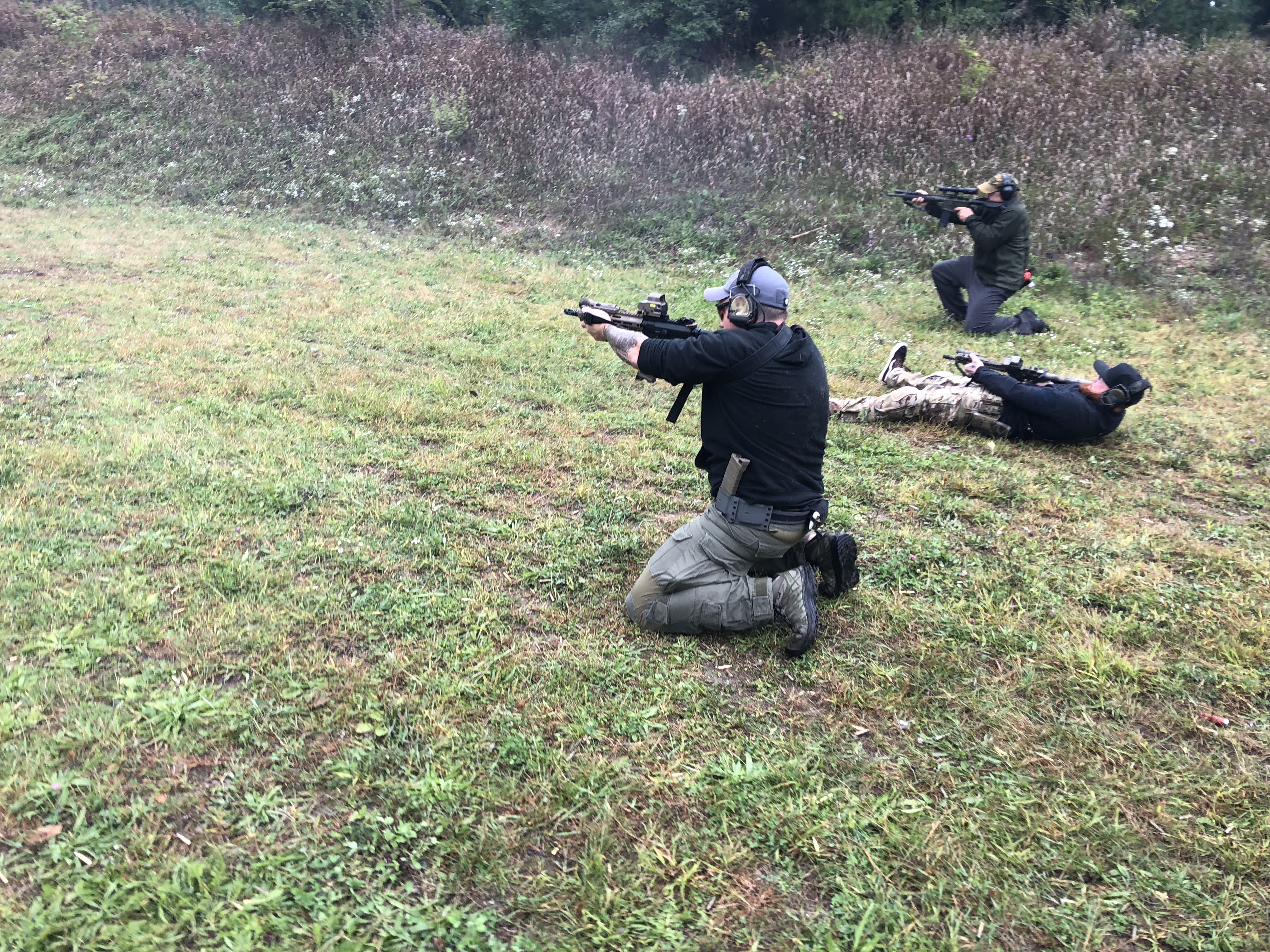 They’re not pretty. They don’t have to be. They just have to work… quickly on demand.

With that we broke for the day.