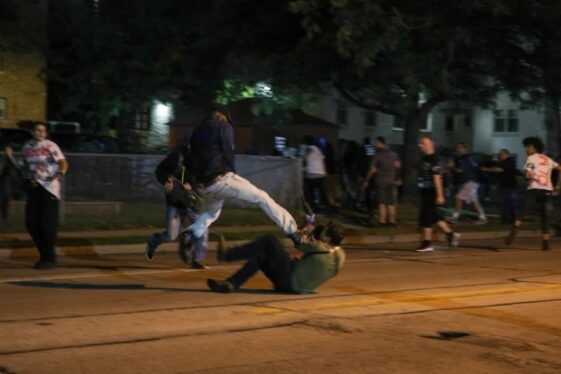 [Ed: This was first published November 19 on The Arbalest Quarrel. Reposted by permission & minimally edited for DRGO.]

A couple of days prior to the jury’s decision in the Rittenhouse case, the New York Times posted an editorial, titled, “The Truth About Kyle Rittenhouse’s Gun,” by Times Opinion Columnist, Farhad Manjoo. In part, the Manjoo said this,

“I’ve spent the past couple of weeks riveted by the murder trial of Kyle Rittenhouse, the white teenager who shot and killed two people and injured a third during a night of Black Lives Matter protests and civil unrest in Kenosha, Wis., last year.

“It was a turbulent case. For many days the prosecution was on the ropes — some of the state’s witnesses seemed to bolster the defense’s case that Rittenhouse acted in self-defense.

“But on Monday, the lead prosecutor, Thomas Binger, offered a meticulously documented closing argument that deftly summarized all the ways Rittenhouse acted unlawfully.

“That’s because it cleverly unraveled some of the foundational tenets of gun advocacy: That guns are effective and necessary weapons of self-defense. That without them, lawlessness and tyranny would prevail. And that in the right hands — in the hands of the “good guys” — guns promote public safety rather than destroy it.

“In the Rittenhouse case, none of that was true. At every turn that night, Rittenhouse’s AR-15-style semiautomatic rifle made things worse, ratcheting up danger rather than quelling it. The gun transformed situations that might have ended in black eyes and broken bones into ones that ended with corpses in the street. And Rittenhouse’s gun was not just a danger to rival protesters. According to his own defense, the gun posed a grave threat to Rittenhouse himself — he said he feared being overpowered and then shot with his own weapon.”

This is self-defense as circular reasoning: Rittenhouse says he carried a rifle in order to guarantee his safety during a violent protest. He was forced to shoot at four people when his life and the lives of other people were threatened, he says. What was he protecting everyone from? The gun strapped to his own body, the one he’d brought to keep everyone safe.”

Well, the jury in the Rittenhouse case blew this absurd New York Times editorial out of the water.

At the core of the Second Amendment rests the right of self-defense. This isn’t a supposition. This isn’t theory. This isn’t opinion. And it certainly isn’t a mere fervent wish. Self-defense is at the heart of the inviolability of personhood; the sanctity of mind, body, and spirit.

No other Nation on Earth, but the United States, talks about the Right of self-defense as a fundamental, unalienable, natural law right, and truly means it; has etched it in stone in its Constitution.

What does the international community have to say about this? Read all the documents you will, disseminated by the UN and the EU. They all go on about human dignity and the right to life, sure. But you will struggle to find one that even mentions the right of “self-defense.”

You won’t see it. You won’t find it. It doesn’t exist. But then, are not the words “right to life” and “human dignity” vacuous in the absence of the inherent, natural, God-given right of self-defense to secure one’s life? And isn’t individual responsibility an important component in that equation?

The Right of Self-Defense is embedded in the right of the people to keep and bear arms.

A firearm is the best means of self-protection and has, for centuries, been thus.

Make no mistake—the most cherished right of every human being was on trial in the Rittenhouse case: The right of self-defense.

The mainstream Press will play the outcome of this case as it has from the outset; as the aforementioned splice from The New York Times editorial presents—that the Rittenhouse case is about guns and the need to place further constraints on the Right to keep and bear them.

That has been the messaging droning on, all along: guns promote lawlessness; guns threaten public safety and order; guns don’t belong in a civilized society; guns aggrandize vigilantism; and so on and so forth.

The Rittenhouse case isn’t really about guns. It never was.

The case is about the inherent, natural, immutable, God-given Right of Self-Defense. And as the case proved, armed self-defense works damn well. Kyle Rittenhouse would have suffered serious injury and probable death had he not been armed. No question about it. No one seriously doubts it.

A brave young man, looking for neither glory nor condemnation, went to Kenosha, to protect the city of his father from destruction. He did that because the police couldn’t because an effete State Government wouldn’t let the police fulfill its main function; its official mandate: to protect the community it serves.

The people themselves would have to step up, and one young man did.

Many journalists and commentators will say, in the days, weeks, and months to follow, that the jury came to the wrong conclusions in each of the counts against Kyle Rittenhouse. Some, though, will admit that the case was a weak one from the start. The liberal Press will rant and rave, fume, and make excuses, and will issue dire warnings of what the outcome of this case portends for society, which undoubtedly the Press will, wittingly or not, foment.

But the truth of the matter is that the case against Kyle was, from the start, not only weak, it was absurd.

Video evidence alone demonstrated beyond a reasonable doubt that an angry mob, out for blood, intended to seriously injure or kill Kyle Rittenhouse. The mob was chasing after Kyle. Kyle wasn’t chasing after them. Kyle did his level best to avoid confrontation. And that is a critical point when a person claims self-defense.

The State’s case against Kyle was nonsensical from start to finish. It was an oblique attack on the inherent right of self-defense. But it was also a direct assault on civilian ownership and possession of firearms.

The prosecution argued that, if a person has a right to self-defense, Kyle certainly didn’t because he didn’t play fair: he brought a gun to a knife fight, notwithstanding that one of the attackers did bring and did point a loaded handgun at Kyle.

But the prosecutors never charged that third attacker, Grosskreutz, for unlawfully carrying a concealed weapon. Strange that.

The prosecutors created a story that Kyle, by carrying a rifle that night in Kenosha, was looking for trouble. The State constantly used a buzzword, “active shooter” to describe Kyle.

The prosecutors employed rhetoric instead of reason to entice, seduce, and mislead the jury. It didn’t work. The jury saw through the sham. They were never taken in by it.

And, fortunately, justice was served. The jury obeyed the instructions given them by the Judge. The jury wasn’t deluded by Biden’s insulting and ludicrous and false assertion that Kyle is a “white supremacist” or by claims that the Rittenhouse case is all about vigilantism—as if any of that would or should have bearing on the case, anyway.

But let’s cut to the chase. This case was and is about one thing: the right of self-defense, and whether the employment of it was reasonable under the circumstances. Wisconsin law is clear about this:

The jury found that, on all Counts, Kyle Rittenhouse complied with the Wisconsin law of self-defense. He never shot to kill. He shot to stop aggressive attacks on life, and when the threat passed, Kyle stopped.

And one should take careful note:

Wisconsin law doesn’t assert or imply a limitation on the use of firearms for self-defense.

On the contrary, the State Supreme Court of Wisconsin reiterated the right of armed self-defense.

See also State vs. Christen, 396 Wis. 2d. 705, 958 N.W.2d 746 (Wis. 2021), and note, once the defendant successfully raises the self-defense privilege, the State has the burden to disprove self-defense beyond a reasonable doubt at trial. And that standard is a difficult one for the State to overcome. Moreover, if the State cannot meet the standard of proof, then the privilege automatically applies to any crime based on the conduct directed to the criminal charges.

The Press will, no doubt, have a field day with this turn of events.

Let us hope the U.S. Supreme Court in NYSRPA v. Bruen, will recognize and make abundantly clear that the right of armed self-defense doesn’t stop at the doorstep of one’s home.

— Roger Katz is CEO of Arbalest Quarrel, and an attorney licensed in Ohio & Arizona (formerly New York) focusing on federal and state firearms issues. He has worked in patent, intellectual property, criminal and securities law and has degrees in English, Philosophy, Public Administration & Education. He believes in the sanctity of the Bill of Rights.

All DRGO articles by Roger Katz

—NYPD veteran Stephen D’Andrilli is President & CMO of  Arbalest Group, with masters degrees in Criminal Justice and Public Administration. He is an NRA Certified Firearms Instructor & Training Counselor, and is passionate about the Constitution and Bill of Rights.

All DRGO articles by Stephen D‘Andrilli